In Conversation: Butch Vig Discusses His Career From Nirvana to 5 Billion in Diamonds

The Garbage drummer’s psych-rock collective also shares an exclusive video for “Weight of the World,” the latest single from “Divine Accidents.”
Menu

The Garbage drummer’s psych-rock collective also shares an exclusive video for “Weight of the World,” the latest single from “Divine Accidents.”

Butch Vig is a busy guy. In addition to playing drums in Garbage and being one of the most sought after rock producers in the world, on November 20 his band 5 Billion in Diamonds will release their second full-length, Divine Accidents. The album is once again a collaboration between the producer trio of Vig,  Andy Jenks, and DJ James Grillo—and features  passionate performances from Ebbot Lundberg (The Soundtrack of Our Lives), David Schelzel (The Ocean Blue), James Bagshaw (Temples), Martin Barnard (Alpha), and many others this time around.

How would you describe this project in the arc of your musical career?

Well, it’s a collaboration. I’m a producer and musician, Andy Jenks is a producer/musician, James Grillo is not a musician. He’s a DJ, but he’s got 20,000 pieces of vinyl and 15,000 CDs and he’s very opinionated. [Laughs.] And really a producer is someone with an opinion, hopefully that artists trust. Once Andy and I start coming up with music bits, we let James sort of steer us in a certain direction; he’ll play a sample of an old record and go, “I really like the way that sounds,” or, “Maybe we should sort of go for this kind of reference.”

I think artists we’re collaborating with really like working with us because it’s a pretty wide open palate and  they’re all able to put their own stamp on it. Then I mix everything; I was conscious when I mixed the record—there was some continuity to it in terms of where the vocals were sitting or the space in the keyboards. That’s one of the challenges of doing a record like this where it’s a lot of collaborating because you have a lot of colors and palettes on each song.

What stands out to you about “Weight of the World”?

“‘Weight of the World’ was meant to be sort of a celebratory acknowledgement of how fucked up everything is—we wrote it last year, but 2020 has been one fucked up year, man.”

Well I started the track to that and actually came up with the initial lyrics for the chorus and then Ebbot [Lundberg] sort of took that and did his own thing with it. It was meant to be sort of a celebratory acknowledgement of how fucked up everything is—we wrote it last year, but 2020 has been one fucked up year, man. [Laughs.] So in some ways it’s kind of a very appropriate song of the moment we live in, but is very much acknowledging that and celebrating it. In the front half of the song Ebbot’s a little more reflective, and when it comes out of that break and he goes high like [he did with] The Soundtrack of Our Lives, it’s one of those perfect Ebbot moments where he just pushes the dynamic.

I imagine all three of you are quite busy. Do you think there will be another 5 Billion in Diamonds album?

I think there probably will be another record. The first record had a lot of film soundtrack references from the late ’60s and ’70s, and a lot of the songs we referenced were from that era, but there are more references from the ’80s and ’90s on Divine Accidents, and I think we’re sort of expanding our sonic palette. I think the process will probably have a little longer duration this time around: Part of it is COVID, because we were hoping to do some shows this year and that’s all been pushed back to god knows when.

But we’re all in other projects: I have a Garbage record we just finished and we’re probably going on tour next fall, so I hope [5 Billion in Diamonds] can play live someday. The musicians are so kickass in the band. I’m not going to play drums, I’m gonna strum an acoustic guitar, play Moog synthesizer, and drink a beer onstage. [Laughs]. There’s probably going to be twelve of us onstage if we ever perform, but there’s strength in numbers.

Speaking of the Garbage record, is there anything you can tell us about it?

Well, the record is pretty dark and each song kind of has its own vibe. I sort of feel like it’s a mutant cousin to our third album, Beautiful Garbage, which also had a similar thing—each song was its own entity. Funny enough, Shirley [Manson] wrote most of the lyrics at the end of last year. She wrote a couple of them in February and March, but she wrote all of them before COVID kicked in, and the insanity of racial bias and everything else that’s happened in 2020.

“Rock is not really getting played on Top 40 radio, so in the mainstream a lot of people think it’s dead. But there are so many cool bands out there making great noise and writing great songs.”

Every year somebody says either rock is done, or the next week I’ll hear rock is making a comeback—it just depends on if they’ve heard a cool new band, right? Rock is not really getting played on Top 40 radio, so in the mainstream a lot of people think it’s dead. But there are so many cool bands out there making great noise and writing great songs. You have bands like Foo Fighters or Green Day that can sell out a stadium with 80,000 people, and then you have bands like Against Me! who go out and put on these fierce shows every night and their fans are so hardcore, it’s like a complete uninhibited celebratory experience.

So rock is not dead, it’s never been dead, and it doesn’t need to make a comeback, because it’s still there. But I can’t see it breaking into mainstream radio anytime soon. Nirvana—when they went number one, no one saw that coming, but they just wrote a perfect record for that time. It was a zeitgeist moment. It could happen again, but I don’t see anything on the near horizon like that. 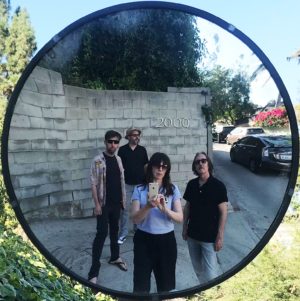 We’re coming up on thirty years of Nevermind. How do you look back on that record, and how does that experience feel now?

Well it’s funny, when Garbage happened I sort of had to distance myself from Nirvana a little bit because we would sit down and do an interview and I could tell a journalist didn’t really want to talk about Garbage, they wanted to talk to me about Kurt Cobain and Nirvana. Luckily, after the first record, Garbage had a really successful run and Shirley became an icon, so people no longer wanted to talk to me, they wanted to talk to Shirley, and that’s as it should be. She’s a really powerful and incredible singer, visually striking, and really opinionated.

When I was doing [2010’s] Wasting Light with the Foo Fighters, Krist Novoselic came down and played on one of the tracks. We had a great recording session and hung out and talked all night about some of the experiences of making Nevermind. I went and hung out with them on tour leading up to [the twentieth] anniversary, and it was the first time the three of us together started doing press. I think we’ve all acknowledged that it completely changed our lives for the better. It’s just allowed me to sort of pick and choose my projects.

None of us saw it coming, and like I said, I don’t know if there could be another zeitgeist moment like that, so I’m really lucky to have been on that ride. But I think that record still sounds very fresh and passionate. The songs are super hooky, the band is playing in peak form, and the production…they kind of had to diss me after the success of their record because you can’t be a punk rocker and say, “Hey, we’re so happy we sold ten million records.” But I know when we finished that record, the band loved it. Kurt loved the way it sounded. So it was nice twenty years later for us to sit down and talk about how great that experience was—and as I said, I still think the record sounds really good. FL