In Conversation: Ani Di Franco Takes Us Into the Vulnerable World of “Revolutionary Love”

Ahead of the songwriter’s 22nd studio album, Di Franco opens up about her goal to practice revolutionary love in her daily life.
Menu

Ahead of the songwriter’s 22nd studio album, Di Franco opens up about her goal to practice revolutionary love in her daily life.

Last year, in the early months of the pandemic, Ani Di Franco found herself in a tough spot: she had a batch of new songs she desperately wanted to record, but no safe way to fly her bandmates to her home studio in New Orleans. She reached out to her friend, Grammy-nominated producer Brad Cook, who told her that if she could get to his studio in Durham, North Carolina, he’d arrange everything for her.

Over the course of two whirlwind days, Di Franco, Cook, and a slate of Durham-based musicians recorded the eleven tracks that make up Revolutionary Love, the 22nd studio album in Di Franco’s iconic thirty-year career. Released on her own Righteous Babe Records, Revolutionary Love is a lush, meditative exploration of personal hardship, political strife, and the damage we cause when we choose not to hear one another.

Though Di Franco has long been known for her overtly political, fearlessly blunt lyrics, Revolutionary Love presents her at her most vulnerable. “There’s nothing I can say beyond this whispered wish / Your anger has a hunger, mister, and I’m its favorite dish,” she sings on “Shrinking Violet” as she explores what she refers to as the “shadow side” of her life.

Di Franco recently spoke with us about the album, her goal to practice revolutionary love in her daily life, and the challenges of working as an indie artist in the time of COVID.

How are things going for you these days?

Just frantic. There’s a lot of trying to reinvent myself, as [with] so many whose livelihoods are gone right now. I’ve got more side hustles than I ever dreamt of before. [Righteous Babe Radio] is a huge endeavor that takes a lot of time. And I’m working on a musical and a children’s book in addition to the album.

Revolutionary Love was recorded in a semi-abandoned strip mall. How did that come about?

It was instigated and organized by Brad Cook. I had intended to make a record when I came home from my February tour, and suddenly flying my band to my home studio was not in the cards. I talked to Brad and he said, “If you can get here, I’ll do the rest.” He put the band together from his homies in the Durham area, including his brother Phil on keyboards and all these wonderful musicians. I couldn’t have been more blessed with the crew he put together. Looking back, it was a very surreal experience, to do something so intimate as to play these songs together without touching, without seeing each other’s faces even. There was no hugging in that album, which is weird. It sounds small, but it’s big.

“It was a very surreal experience, to do something so intimate as to play these songs together without touching, without seeing each other’s faces even. There was no hugging in that album, which is weird. It sounds small, but it’s big.”

What was it like to record an album with people you don’t know?

It was very exciting. Those are the moments as an artist that you live for. This pandemic, for me, has been this long desert, but in there it’s punctuated with these little oases that are so wonderful and luscious. Like that recording session was one where not only did I get to play music, but I got to meet people through music and have new experiences. Making the video for “Do or Die” was another one of those blips in social isolation where you come together with all these people you don’t know and by the end of the day, they’re your best friends. And, you know, then it’s back to isolation.

The political songs on this album sound different from the uncompromising rallying cries of your past. Are you approaching your activism differently these days?

I hope so. Not that I devalue youthful outrage and righteous rage. I think youth is a very powerful agent of change. I turned fifty this year and I have much more of a will now to try to connect with anyone I can. I imagine myself singing to my sister-in-law, for instance, who is a Fox News–watching Republican because what I want is for her to hear me and for me to stay humble and curious about her. That’s why “Revolutionary Love” is the centerpiece of this new record. My focus in everything I’m doing now, including music and art, is to try to come at it from that place of unconditional love for myself, for my fellows, and for my opponents.

The songs on the album are very personal. Even the early singles that sounded political initially seem to be about intimate challenges you have going on, when listened to in the context of the entire album.

Yeah, most of the grappling to achieve revolutionary love that I’ve been doing is in my personal sphere, in my marriage and my family. I have been someone who has had to travel with my work and leave my children at home with my spouse, which has been very hard for everyone. There were many years of struggling. So, this pandemic, the gift of being given permission to stay home, has allowed for an opening and a transformation of relationships.

Two of my favorite songs on the album are “Bad Dream” and “Shrinking Violet,” which happen to be two of the more challenging lyrically. Someone wrote in a social media post that they grew up in an abusive home and until “Shrinking Violet” had never heard a track that so skillfully encompasses what it’s like to live in fear.

“My focus in everything I’m doing now, including music and art, is to try to come at it from that place of unconditional love for myself, for my fellows, and for my opponents.”

I appreciate so much being seen right now, by you and the person who wrote that, and feeling that connection. I felt afraid, I felt hesitant, I felt there was a deeper level of vulnerability I was risking in those songs. I am aware that I play a superhero role for people, so to show myself feeling very small and very scared and very disempowered—I felt it was betraying my image. I think the persona that I have on stage is not the persona that I have in every moment, and so, yeah, sharing that did feel extra risky.

Does being a parent factor into your fear of releasing such personal work?

It absolutely would if I allowed it. I can’t—that is something I choose not to mull over. I mean, I have a thirteen-year-old. Just to imagine what she’s pawed around on the internet and discovered, or what people say about me that she has to ingest. It’s too much. Luckily for me, my parents gifted me with an idea about art, about creativity, that I basically think of it as sacred, and I do believe we should give it that space that it deserves because it is actually transformative. It is the gods’ and goddesses’ work that you do when you create. Artistic freedom is essential for human evolution, so you have to make space for it. You cannot shut down the freedom people must achieve within their souls to be honest, to express, to make art. I guess I sort of have that to fall back on in my consciousness that I hope that my daughter, my son, everybody in my personal life understands.

“It is the gods’ and goddesses’ work that you do when you create. Artistic freedom is essential for human evolution, so you have to make space for it.”

“Confluence” is one of the few full-length instrumental pieces you’ve put out. How did it come about?

When I met Brad at the Eaux Claires Festival in Wisconsin, he lent me a guitar, because I fell in love with it and I couldn’t put it down. A lot of the songs on this record ended up being written on that guitar. “Confluence” was a meditation. I was hanging out with this guitar on my own, and I came up with those chords. It felt like my falling in love with the guitar is that piece of music.

It follows that song “Simultaneously,” which talks about living in two different worlds, this world outside you and your inner world. I wanted to represent the inner world, the quietude and, hopefully, a place of peace within it—a place of connectedness and safety. It is meant to be a breathing space, where you check in with yourself.

The album ends with the hopeful “Crocus,” which feels like a love song after a fight. Have you found peace in the chaos?

I guess in many ways on the record, I say “We can do this if we try.” So that’s where I certainly wanted to end, on that note. It’s funny, now when I listen to “Crocus” I feel like I’m beginning to take the next step on the journey toward reconnecting with my opponent in the form of my spouse, and challenging myself to sing the lines, “When you open up the doors and the windows too / When you open up the channel” as “when we.” It’s incredibly hard to own your part, to do your work, and to not keep score. FL 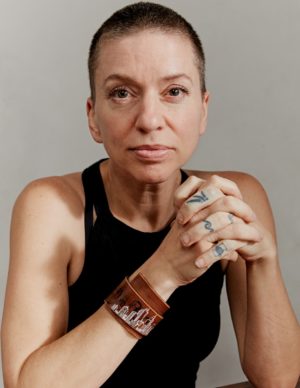