The LA trio and “Birthday Boys” alums are here to prove that the world needs party bands more than ever.
Menu

The LA trio and “Birthday Boys” alums are here to prove that the world needs party bands more than ever.

The Sloppy Boys knew exactly how they wanted to celebrate the release of their third album, Paradiso: with “a big sweaty kooky tour,” in the words of singer-guitarist Tim Kalpakis. Unfortunately, Paradiso came out last July. How does a self-proclaimed “party rock band” endure when parties and rocking are on indefinite hold?

Formed in 2013 by Kalpakis, drummer Jeff Dutton, and singer-bassist Mike Hanford, The Sloppy Boys sprang from the loins of the Birthday Boys, a sketch group whose titular IFC series debuted later that year. Their first album, Lifelong Vacation, arrived in 2018 and was followed the next year by Dancing on the Wind. Faced with the imperiled rollout of Paradiso, the band got creative: They hosted Zoom rooms for ten weeks, dissecting the album one song at a time with participating fans (known as Slop Heads); they launched an eponymous cocktail podcast; and they found a way to make a COVID-compliant music video. Enlisting longtime Jimmy Fallon writer John Haskell to direct, and working in pods of two—at no point was the whole band in one place—they delivered “Tha Mastah Bong Rippah,” a three-minute onslaught of mangled stoner (or “stoney”) cliches and meta trickery. And Clif Bars.

Connecting with the band on the afternoon of Inauguration Day, we explored the making of the video, the recent shutdown of their Twitter account, a humiliating moment on a Birthday Boys set, and their post-pandemic dreams.

Kalpakis: John Haskell is kind of creating a, uh, David Lynchian body of work with our music videos. So there’s a through line forming, and only he really knows what it all means.

Dutton: It’s a sort of spiritual sequel to our video for “Let’s Party,” which he also directed. Haskell does not pride himself on his directing. But he does make videos.

Kalpakis: He better make videos. He told us he’s a music video director!

We see a lot of pretty obvious stoner references, but there are some wild cards too. Why the shot of a Spencer Gifts store?

Hanford: Well, of course stoney posters come from there.

Kalpakis: If you want to buy a black-light poster that says “Take me to your dealer,” you have to go to Spencer Gifts in the mall.

Kalpakis: I know that there was a reason for Roger Ebert; there’s just got to be. Maybe that’s one for the Slop Heads to decode. 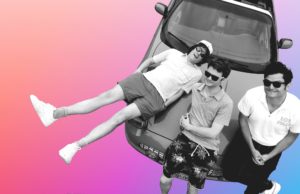 I believe it comes right after one of Beavis and Butthead.

Hanford: I’m surprised you didn’t pick that up.

Mike, where did you shoot your scenes?

Hanford: I live in New York, and we went to Prospect Park to shoot it. I’m dressed in that king outfit, and a lot of people would come by and be like, “Hamilton!” At one point this woman and her little kids came up and she was like, “I don’t want to bother you, but are you doing Hamilton?” “No, no, no.” She walks away and then comes back, and she’s like, “Hey, could you help me? Um, one of our kids is stuck in a tree.” This girl had climbed up onto a very high part of a fallen tree and she was too scared to come down. John and I had to go over and we’re like, “OK, if you just fall this way, the two of us have you.” She’s like, “No, I can’t!” We were like, “All right, well, if you could turn around and just shimmy down…” “No, I can’t!” And then we were asked to go away because we were freaking her out.

Kalpakis: Hamilton is coming after her!

Hanford: You can only be polite, like, “Well, do you feel OK doing this now?” and we just wanted to be like, “Just jump off! We’re right here. You’re only seven feet up.” Eventually we got her down and got back to our video before the sun set.

Dutton: You should have rolled on it!

Kalpakis: Well, we had to help this person.

Dutton: Oh yeah. Only so many hands.

Let’s go back to the beginning. How did you guys start out?

Kalpakis: All of us lived together, plus other friends from our sketch group, the Birthday Boys, in a house in LA for seven years.

Kalpakis: We got a sketch comedy series on IFC around that time, and some of us were moving out of that house. We wanted to have one last wacky rager to celebrate what had been a very fun place for a lot of people, so we had a music festival in the backyard, where it was all cover bands. We had all of our friends that played in bands do cover sets, like Smashing Pumpkins and Green Day.

Dutton: Tim and I were in a Weezer cover band.

Kalpakis: Yeah. You might call us the headliners, not to brag.

Dutton: But The Sloppy Boys Jangly Band, as we were called back then—we played first.

Any originals that time?

Kalpakis: Nope. Didn’t know any. The thing that motivated us to write originals is our friends Rob Getzschman and Stoney Sharp, who have this little bootleg TV station called Highland Park TV. They got all this old analog TV gear—cameras and a switcher from the ’80s—and started shooting weird little shows, sort of cable-access style. They reached out to us about doing an in-studio session and we thought we should have at least a couple of originals. So doing a little appearance on cable access TV was our motivation to write songs. We did “Here for the Beer” and “Let’s Party,” early versions of songs that ended up on albums.

When you started out, were there certain party bands or college bands you wanted to emulate?

Dutton: We kind of fight about what to call ourselves as far as “comedy band” or whatever. Tim always says, “We’re a party rock band.” I think that’s a good descriptor, but when I hear “party rock,” I think of LMFAO, which…

Kalpakis: And that’s what I mean to say: We’re like LMFAO.

Dutton: But I like when you bring up Paul Shaffer’s band or Huey Lewis and the News. They’re rock bands, but specifically they’re like dancy, poppy rock bands, like Elvis Costello and the Attractions.

Hanford: They’re not putting you in, like, a sullen mood like some grunge or anything like that. People put the punk label on us on some tweets and stuff, and we were like, “Yeah, I guess we are punk, because we are loud and bad.” Not to say punk is bad. Hey, look, I’m a punker. I love that shit.

Dutton: Look at him in his polo shirt. 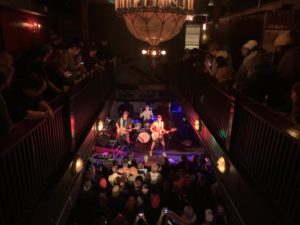 Turning for a moment to The Birthday Boys, what’s one sketch that you’re especially proud of?

Hanford: The one that I think is most surprising was the Seven Brothers Brewery sketch.

Dutton: It’s like a microbrew commercial where it slowly comes out that the guys are swimming in the beer.

But then there’s the cartoon cover of Paradiso: The three of you are shown fully nude.

Kalpakis: Yeah. The swift hammer of Twitter justice takes five months. We put out the album and it has a beautiful artistic vision of our fully nude bodies. And just last week we had our Twitter account shut down. So I believe somebody must have reported us, right? Or do you think Jack Dorsey has been going through accounts one at a time?

Hanford: He finally got around to us. Like, “All right, lemme do the comedy band. Woah!”

What’s the first thing you want to do when people can gather safely again?

Kalpakis: I want to play a sweaty, stinky rock show in a dive bar.

Dutton: We’ll do that show as soon as possible, so that means no practice. It means we’re coming in cold, folks, and you just gotta be on board.

Hanford: We won’t practice at home by ourselves either.

Kalpakis: Hopefully everyone will be so drunk and happy that it won’t matter. FL