This is the sound of a band burrowing deep into the heart of its genre, ripping it apart and reviving.
Menu

This is the sound of a band burrowing deep into the heart of its genre, ripping it apart and reviving. 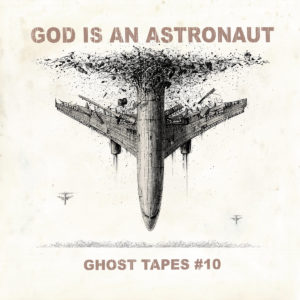 A two-decade-long career is impressive for any band, but that’s even more the case with those bands who dare to push the envelope—Ireland’s God Is an Astronaut among them. Ghost Tapes #10 is, as its title suggests, the four-piece’s tenth full-length, but it’s not, as its title also suggests, just another part of an ongoing series. On the contrary, like the nine that preceded it, this record strives ambitiously to create not just something new, but something that perhaps hasn’t been heard before. As such, its seven songs are the sound of a band burrowing deep into the heart of the genre, ripping it apart and reviving it at the same time.

While there are moments of transcendental beauty here—in the delicate, tentative beginnings of “Burial,” in the yearning of “Barren Trees,” in the timid, somnambulant sway of closer “Luminous Waves”—Ghost Tapes #10 is, on the whole, an abrasive and confrontational album. Judge opener “Adrift” by its title and you may envisage a gentle calm—islands in the background, the sun beating down, people playing on a summer beach without a care in the world—but it’s more akin to a violent storm, a tempest whipping men, women, and children up into the air without discrimination, breaking bones before the bodies wash gently back ashore. And while “In Flux” begins in an almost calming fashion—albeit with the air of tragedy still hanging in the air—it soon morphs into a ferocious pulse of scorching guitars that sound like whatever kind of modern Armageddon is lying in wait.

While post-rock can lean toward self-indulgence when it comes to both song length and structure, neither fault lines appear here. Indeed, at nearly seven minutes, “Adrift” is the album’s longest track, while “Luminous Waves” doesn’t even hit four. Yet in all of these songs there’s a lifetime of experience, of pain, of sorrow, of existence. That a band could summon this much emotional and musical intensity is impressive enough. That God Is an Astronaut are still doing it twenty years on makes Ghost Tapes #10 remarkable.