In Conversation: Morris Day On His Life in Funk with The Time and Prince

The legendary Minneapolis singer/musician is featured on the season debut of TV One’s “Unsung” series, highlighting his remarkable career.
Menu

The legendary Minneapolis singer/musician is featured on the season debut of TV One’s “Unsung” series, highlighting his remarkable career.

Morris Day radiates energy. Riding pulsating grooves with a particularly cool vernacular and a wardrobe that was almost as loud as his music, the revered singer-songwriter-musician helped popularize the Minneapolis funk movement that exploded in the early 1980s thanks to his work with The Time, Prince, and Jimmy Jam and Terry Lewis. The sizzle of signature tracks “Jungle Love,” “The Bird,” and “777-9311” hasn’t diminished, and his scene-stealing performances in Prince’s blockbuster 1984 film Purple Rain stand the test of time.

After selling millions of albums with The Time, Day embarked upon a successful solo career, battled drug addiction and depression, and enjoyed a resurgence in the 2010s thanks to his still-pulsating live show. Day recounts some of his story on his episode of TV One’s Unsung, which premieres Sunday (March 21) at 6 p.m. EST.

In our Q&A, Morris Day discusses why The Time only put six songs on each of its first three albums, his creative tug-of-war with Prince, his early impressions of rap, and his new material.

In your Unsung episode, you discuss your ability with and fondness for drawing early in your life. As you developed as an artist, how did you find that these different parts of your creativity enabled you to flourish in other ways?

If you are an artist, that can manifest in a lot of different ways, and for me early on, it was drawing. Even though I still have music in my blood already, I took a fondness to comic books. At one point I drew my own comic book. It was just in my blood, and then the music started taking over, and then I got introduced to the drums and it was just on from there.

Drummers are typically in the back, as you’re well aware. So where and how did the confidence and the wherewithal go from being the drummer to taking that leading role?

I think a lot of times talent-wise, drummers are diamonds in the rough because you’ve got Phil Collins, Maurice White, Jeffrey Osborne, Dave Grohl from Foo Fighters. So many drummers are sitting back there with so much talent. I’m not saying it’s wasted on the drums, but drummers are talented people usually, and the talent usually goes way beyond what you see.

“So many drummers are sitting back there with so much talent. I’m not saying it’s wasted on the drums, but drummers are talented people usually, and the talent usually goes way beyond what you see.”

As for The Time, I was always intrigued with the self-titled debut album having “After Hi School” and “Cool” back-to-back because “After Hi School” was about all these things you wanted to do, and then “Cool” was about having all these different residences and dancing in Rome. From a creative and from a sequencing side of things, how did those songs work back-to-back for you guys?

I guess when you think about it, “After Hi School” should have come first, right? I don’t think we were thinking about sequencing like that necessarily because that was really our first effort. We were just trying to make it sonically right. And, I was always told that you had to put the bass-heavy songs—because we’re talking vinyl now—early on the vinyl because the closer it gets to the center, the less bass response you’re going to get. So, a lot of it had to do with sonics more than the sequencing itself.

On the first three The Time albums, there are only six songs on each album. Why?

Well, that’s just kinda something that Prince came up with. He said, “We’re only going to give ’em six,” and we just kind of stuck with that. Interestingly enough, today that would be considered an EP. But back then, we were able to call it an LP. 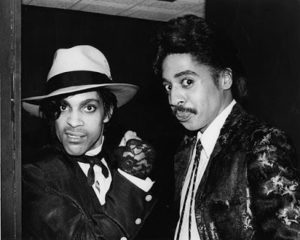 Some of the songs are so long, but then “Onedayi’mgonnabesomebody,” for instance, is much shorter. How did you guys find that balance between the length of the songs?

I think the songs just kind of took their own form. We would jam out, get onto a bass line and a drum beat that we liked and just go for it, and then start layering it. It just kept getting more interesting. A lot of times the songs were a lot longer than what you heard, but even cutting them down to the good stuff, they would still be seven, eight, ten minutes long sometimes.

As you were emerging as a frontman and a vocalist on What Time Is It? what role, if any, did you still have on the percussion side of things?

“Prince was always in control. That was one of the things that led to us eventually kind of having a rift between us because at that time, I was young, creative. I had a lot of music in my blood that I really wanted to express and I wasn’t getting an opportunity to do it. Everything had to be his way, which was not a bad way, by the way.”

How did you guys differentiate the roles early on?

Well, Prince was always in control. That was his thing. He’s like, “We’re going to do this pretty much my way.” I would get a word in edgewise every now and then, and a little bit of creativity. But, that was one of the things that led to us eventually kind of having a rift between us because at that time, I was young, creative. I had a lot of music in my blood that I really wanted to express and I wasn’t getting an opportunity to do it. Everything had to be his way, which was not a bad way, by the way. But I still had stuff that I wanted to do, and that’s what eventually led to us going our separate ways.

It’s interesting you say that because the perception I always got is the cool factor—your clothes and the aesthetics of things that you did. But when I heard What Time Is It? with “777 -9311” and even with “Gigolos Get Lonely Too,” there was a sense of that facade cracking a little bit, of the desperation or even just the fun of “Hey, I need your number.” How do you think you balanced that kind of need and desperation versus this cool persona that you had already established at that point?

Well, the cool was always going to be the platform. I guess you could have a little desperation in your coolness sometimes, but you could still fall back on it when you feel like you’re getting out of your comfort zone. So cool’s always been the platform for it all.

Now with What Time Is It?, at the very beginning when you first say it, that’s been sampled so many times in rap songs. Back in 1982, what did you think of rap?

When we came out, that was pretty much right off the heels of The Sugarhill Gang. So it was very new in the early ’80s. I thought it was cool. I’ve got to admit, I didn’t think it would stay around as long as it did back when it was first coming out because we were all about songs. You’ve got to have your verse, your hook, your bridge, and then on from there. A lot of times rap songs, they don’t necessarily go anywhere musically. It’s all about the beat straight ahead and the lyrics. So that was just something totally new for me.

In your Unsung episode you talk about some of your drug and self-esteem struggles. I’m curious about how the lack of confidence and the depression kicks in, because you’re clearly so talented and you’ve had all this success.

I just think I got burnt out and I got in this shell where I didn’t really want to leave the house. I went through a stint with the drugs, and of course that was in the past, at that time. But I just kind of lost it. I had my young kids and I kind of wanted to embrace that. So I was torn between that and being out there and I just kinda took a break.

How did it regenerate?

I kind of bottomed out, man. I just stopped doing everything, pretty much lost everything. I’m sitting in my sister’s little one-bedroom apartment. And I got a call from a friend, Ron Sweeney. He’s like, “Man. What are you doing?” I was like, “I don’t know.” He’s like, “Well, why don’t you put the band back together?” Why didn’t I think of that? A light bulb went off. So I started calling the fellas. Next thing I know, we’re in rehearsal. Next thing I know, we took a show or two, and the next thing, the phone was ringing off the hook and it’s just been on from there, man.

It’s definitely been a remarkable ride. I imagine quarantine affected some of your plans, but what do you have coming up now?

We’re coming out with a whole new project. “Headrush” is the first real single off of it. Of course we’ve got the book On Time: A Princely Life in Funk available at all the outlets. There’s a lot of things going on. We can’t stop. We can’t let quarantine hold us down. FL 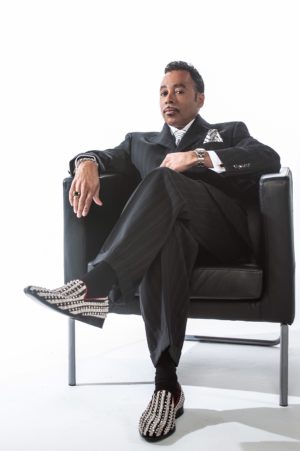