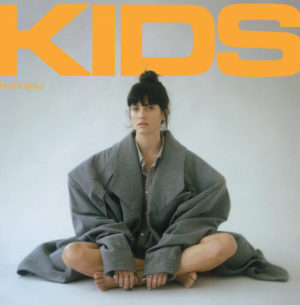 Israeli pop artist Noga Erez’s sophomore album KIDS is a messy, confrontational, entrancing explosion of conceptual observations and socio-political references. Produced with her partner Ori Rousso, KIDS is an exciting concoction featuring referential nods to Kendrick Lamar and Gorillaz, with Erez’s voice constantly zagging from deadpan rap to seductive, sleepy-eyed coos. The album’s 13 tracks are a collision of familial importance and generation-rearing with the bliss and burnout of the pandemic restructuring everything we understand as normal.

The album’s title and initial inspiration stem from the loss of Rousso’s mother and the duo’s contemplation of passing on values and beliefs based on when and where people decide to raise children, she explained in an interview. Erez is a fighter, her vocals resolute, though sometimes her boisterous persona (the album makes countless references to her alter ego Dasha Snow) gets in her way. Take the underdog anthem “Bark Loud,” where the last becomes the first. “One day you’re the meal, next you hold the fork,” she proposes. Lyrics like “Mixed race got a mixed chain / ‘Miss mess of the lowest caste’” get overshadowed by sloppy, offensive boasts like “I can melt the ice for the Eskimos.” At times, it’s hard to credit her with political sincerity.

Erez’s music is complicated and at times completely impenetrable. The beats are exhilarating, but far from conveying any joyous sentiments. Her strongest moments are when her intentions, whether satirical or serious, are clear and complete—the title track being one of the album’s strongest pillars, tapping the violence future generations have to carry while the government refuses to focus on how to stop the past from repeating itself. On the other side of the spectrum is the delusional euphoria of “No News on TV.” It’s the happiest sounding song on the album, but eradicates everything from capitalism to hope.

While keeping all her enemies close across these tracks, this sophomore album is a triumphant follow-up to 2017’s Off the Radar, but also an exhausting listen. On the vulnerable closer “Switch Me Off”—a timely ode that asks for respite from technological overload and a deadly pandemic that fuels it—she demands, “Give me that shot / Please let me / Won’t you switch me off,” the most optimistic take would be that she’s referencing a vaccine. “Candyman,” the LP’s most confusing track, seems to tie together a horror story with the reality of the pandemic (“Now being useless unites us”). The Candyman combats the Lemon Man, which might be a metaphor for optimism. Or maybe it’s a reference to the Sammy Davis Jr. song that’s so sanguine it’s too good to be true, and this “lemon man” will add a bit of sourness to people trying to sweeten cumbersome problems.

In another recent interview, Erez described her music as not being “likable.” Maybe that’s because there are references to decades of violence, 9/11, and Israel’s Six Day War. The climatic bass drops and sinister pop similar to Billie Eilish and FINNEAS are sonic playgrounds, but Erez’s songwriting keeps her music from reaching complete escapism. KIDS is far from a solution to the chaos of the world. It’s not trying to be an answer either, which is part of the reason Noga Erez doesn’t want to be dubbed a “protest artist”—these issues are too complicated to be boiled down into a simple answer within a pop song. Picking apart her lyrics and narration, it’s hard to tell if she’s worthy of the title either.