The 18-year-old songwriter opens up about her visceral new album “Blood Bunny” and letting people into her world.
Menu

The 18-year-old songwriter opens up about her visceral new album “Blood Bunny” and letting people into her world.

When pressing play on a Chloe Moriondo project, listeners are in for a stunning range of music. The 18-year-old Michigan native will showcase songs inspired by her roots of bedroom pop, shown off on the self-produced 2018 release rabbit hearted., along with pop-punk-inspired tracks like 2020’s “GIRL ON TV.” One song she’ll sing of the vulnerabilities of being a teenager in 2021, on the next she’ll deftly weave in horror elements as she imagines bloody revenge fantasies like on breakout single “I Eat Boys.” Her major label debut Blood Bunny—which drops this week courtesy of Public Consumption Recording Co. and Fueled By Ramen—sees her push her boundaries even further, from the intricate production blending cozy pop and rock riffs to the vivid imagery on display across the project.

As she prepares for the release of Blood Bunny, we spoke to Moriondo about letting more collaborators into her world, how she arrives at her evocative lyrics, and her relationship to her fans.

You’ve been working on Blood Bunny for just about a year. At what point did you realize you were putting together your next album?

After the first few songs that I got done in 2020. They started coming together in a certain way. It’s like, “Oh, so this is all going to be on a project, I think.” I didn’t know exactly what the name was going to be, what the exact concept was going to be. I had an artist that I was already going to be working with who I’ve been obsessed with forever who did the art on Blood Bunny. So I knew that was going to be a thing, but I wasn’t sure exactly of anything else, and I don’t know if I ever could have exactly predicted what it would have turned out to be—but I’m so glad that it turned out how it is.

Compared to rabbit hearted., this album has a lot more intricate production and polish on it. What was that adjustment like moving toward a more heavily produced album?

It was awesome. I always pictured myself only being able to make music that sounded like it was made from my bedroom. I made all of rabbit hearted. by myself, and it sounds like it to me. So being able to make this stuff with other people who are willing to collaborate with me on my own stuff that’s important to me, and listen to where my boundaries are with my art, and make huge-sounding music, it was so incredible and mind blowing to me. I never expected my music to be able to sound like this. And it feels like it opened so many doors for me to be able to experiment with my sound and make a bunch of new fun, crazy stuff.

“I never expected my music to be able to sound like this. And it feels like it opened so many doors for me to be able to experiment with my sound and make a bunch of new fun, crazy stuff.”

Your music is very personal, with a lot of exploration of your identity. Was it an adjustment letting other people into that process?

It was for sure at first. I was really nervous about the concept of writing with other people in general, and making music in front of other people. I’d only really had experience with working with friends in terms of like, “I wrote an entire song, will you produce it?” That sort of thing. But these ones were a lot more collaborative. And I did have to kind of find my own groove with it and figure out what works best for me in terms of writing and working virtually with people. But it wasn’t as difficult as I expected it to be. And once I found my groove, it was just really fun to be able to meet a bunch of people from all over the world and just talk about stuff through Zoom or FaceTime or whatever.

Musically, Blood Bunny features not only a lot of bedroom pop, but a lot of elements from punk and alt rock. Where did that inspiration come from to incorporate more of that?

I feel like I’ve always wanted to make that specific type of music. I grew up listening to Paramore and Avril Lavigne, and they’re huge inspirations for me to this day. Hayley Williams…everything she does inspires me, I think she’s so cool. And I talk about her in every interview. It’s embarrassing, but I’m also not ashamed at all [laughs]. So I could definitely say they inspired a lot of this new album. It was just really cool to be able to make stuff that feels maybe sonically comparable to the bands and artists that I grew up listening to and admiring so much. 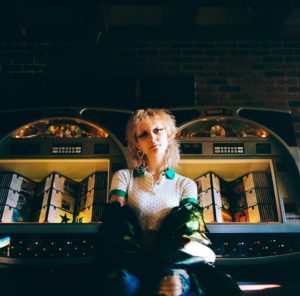 With the lyrical content on the album, it’s a really cool contrast of vulnerability and exploration and then revenge fantasy and bloody murder stuff. Do you go into a project with a certain balance in mind, or do you write what comes out and sort it out later?

I just write everything that I think and then edit it later. I’ve always been pretty weird with my lyrics. I don’t want them to ever be super generic sounding. And whenever I write, I always want it to sound exactly like it would come out of my mouth. No matter what, I don’t want it to sound cheesy—or if it does, I want it to be intentional. I am very picky about that specific part of my music. So I think that balance kind of just comes naturally. I edit things when I feel like, “Oh, that’s a little bit too much. Oh, that’s not enough, I’m going to add something gross and weird in there.” I always like my music to just sound kind of blunt and weird, but also I like to embody softness in some of my songs.

A lot of things, from the lyrics to the music video for “I Eat Boys” are very horror inspired. Were there certain films you drew inspiration from?

Oh my god, Jennifer’s Body. It’s the best. I love it so much. And when I first watched it, I immediately knew that I wanted to write something inspired by it because I just thought the concept was so fantastic. And I remember before I even watched the movie I’d heard of it when I was in middle school because I liked “New Perspective” by Panic! at the Disco and that was one of the songs on it. It was really fun to just make a fantasy story about being a succubus hero who kills boys who do gross things to girls.

“When I first watched Jennifer’s Body, I immediately knew that I wanted to write something inspired by it because I just thought the concept was so fantastic… It was really fun to just make a fantasy story about being a succubus hero who kills boys who do gross things to girls.”

On Blood Bunny there’s a lot of coming into your own and acknowledging what the world has thrown at you—why is it important for you to have that come across?

Most of the people who listen to me, that interact with me on social media, are my age or younger, and I take that into consideration when I write my music because I don’t want to ever seem like I’m trying to be something I’m not. I don’t want them to think that now that I’m writing produced music and making bigger music videos, that I’m not still just an 18-year-old kid. I just grew into this, and I’m still learning about this stuff. I just want everyone who listens to my music to feel like we’re all still in this together. And it’s still just weird being a teenager, and weird being alive in this time in general, as a girl and as a lesbian and as a person in general.

Is there a certain mindset or message you want people to go into Blood Bunny with?

I hope people, when they listen to it, just feel like they can dance and do whatever they want, and maybe feel a little bit more inspired to just do something different with themselves—with their music, with their art, with whatever. I think a lot of people withhold things about themselves with their style or with what they do. And I want this album to kind of feel like a message to just do whatever the hell you want. FL