In Conversation: YehMe2 on Pushing Rap Forward by Returning to His Roots

With his new single “Dog Eat Dog” out now, the former Flosstradamus producer prepares an EP of trunk-rattling, energetic beats made for the club.
Menu

With his new single “Dog Eat Dog” out now, the former Flosstradamus producer prepares an EP of trunk-rattling, energetic beats made for the club.

Rap is known as a lyrical game. The producers, though, are the ones who provide the musical backbone for virtually every song. On his forthcoming EP, YehMe2 collaborates with a potent array of established and emerging talent for a revved-up jaunt through aural experimentation propelled by his fantastical soundscapes. Duke Deuce, Flipp Dinero, 10k.Cassh, TisaKorean, and seeyousoon are among his collaborators, with each bringing a distinctive vocal presence to the Chicago-based producer’s hypnotic and often thunderous soundbeds.

YehMe2 became a star as one-half of Flosstradamus. Back on his own and focusing on hip-hop production, YehMe2 injects his new EP with an edge and energy befitting someone well-versed with rocking live crowds. In our Q&A, YehMe2 discusses his new single “Dog Eat Dog,” his forthcoming EP, his affinity for scratching, how he selects emerging artists to work with, and what it’s like being a self-proclaimed Rap Dad.

With “Dog Eat Dog” off the new project, the music kind of drops out and isn’t as dominant at the top of that track, which I think is unusual. On the production side on things, how did it end up flowing that way?

My approach to production is always from a DJ perspective. I’ve been a DJ for 17 years, and I’ve only been producing for maybe 10 of those years. So whenever I go into making a track, I always think of how I’m going to integrate it in my sets. The stuff that I play live is super high energy, and the rap stuff is almost like a respite. It’s like a little break for the crowd. So I kind of wanted to be able to drop that track and blend it seamlessly, but then not just hit them over the head with the drop. I want to give them a little bit of a breather first and then let Duke [Deuce] come in and do his thing.

“I’ve been a touring musician for 15 years and in my career I’ve always made it a point to be a fan first. I’ve never tried to be too cool. So when I like someone’s music, I’ll reach out to them and I’ll say, ‘Hey, let’s work together.’”

I also thought it was interesting that on the original version of “Dog Eat Dog,” there’s scratching at the end. On the DJ Snake remix, he put scratching at the top of the track. What was your interaction with him regarding the remix?

Me and Snake are homies from back in the day. I always send him music whenever I have something, and he sends me music whenever he drops something. I sent him “Dog Eat” and it was one of the tracks that he hit me back on immediately and was like, “Bro, this is crazy.” We’re both scratch DJs. We both came up in the turntablism world watching DMC battles and stuff like that, so when he heard the scratching, he immediately gravitated to that. That was his choice to put that as part of the hook. But for me, I wanted to put it at the end, kind of like an homage to Swishahouse and early Houston hip-hop. I always loved how they would integrate cuts and scratches in there. So that’s why I put it at the end as a little highlight, but Snake liked it so much that he made a part of the hook. 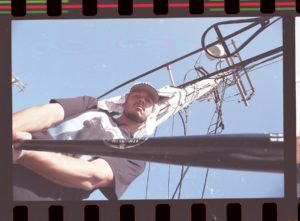 In addition to Swishahouse in Houston, it seems like you have a connection with Memphis rappers, given that’s where Duke Deuce is from. What type of synergy do you think you have with Memphis artists?

Honestly, I’m just a fan. I’ve been a touring musician for 15 years and in my career I’ve always made it a point to be a fan first. I’ve never tried to be too cool. So when I like someone’s music, I’ll reach out to them and I’ll say, “Hey, let’s work together.” Everyone on this EP is someone who I’m a fan of. So it’s not necessarily a Memphis thing. I do love Memphis hip-hop—I definitely grew up listening to Three 6 Mafia and obviously Juicy J was a huge, huge influence to me. When I started producing, Lex Luger and him collaborating was incredible. But that’s not necessarily a Memphis thing. It’s really just people that I’m a fan of.

I was also impressed that the EP has artists from so many different cities. Back in the day, cities tended to have a much more defined sound. Now I think it’s blended a little more to where it’s not as easy to automatically tell where an artist is from. As somebody making music, what differences do you see from artists from different cities?

“I do feel like that stylization is coming back because the music industry has gotten so oversaturated with knock-offs of other rappers. I think you’re going to start to find more and more of those regional styles and sounds being lifted because it makes them cut through all the other sounds.”

I’d hear a song out at the club back when we were in the club, or a homie would play something, or I’ll listen to a mixtape and hear something—I never look at the city that they’re from. I’m more just listening for unique voices. But I feel like that’s something that you can say is a through line of my project, that all the people on there have their own unique voice and bring their own tastes. TisaKorean is one of the most unique and creative voices at this current moment. And like you said, like there’s a lot of fluidity and people sounding like each other. I think the internet has made it so that particular regions aren’t so stylized. But I do feel like that stylization is coming back because the music industry has gotten so oversaturated with knock-offs of other rappers. I think you’re going to start to find more and more of those regional styles and sounds being lifted because it makes them cut through all the other sounds.

You also call yourself “Rap Dad.” Why does that moniker mean so much to you?

First and foremost, I’m a father of two boys. They’re four and six years old. I always share them with the world on social media. I feel like when I first became a father, I became a father publicly and it was at a point where I didn’t really see much of that, especially in the music business. People were more keeping their families in the back and their personas were upfront. I wasn’t necessarily making my family my persona, but I was not having a persona. I was just being myself. I was like, “Hey, this is me, I’m a dad.” Initially people started calling me Digital Dad and I was like, “OK, cool, I’m the Digital Dad.” Now with the EP coming out, I’m just embracing being a father and being an older guy in the game—I’m 37 years old, and in rap years that’s like 100 years old—so I’m the Rap Dad. FL