Hatfield’s 17th collection of original solo material is a fever dream entirely of the indie legend’s own creation.
Menu

Hatfield’s 17th collection of original solo material is a fever dream entirely of the indie legend’s own creation. 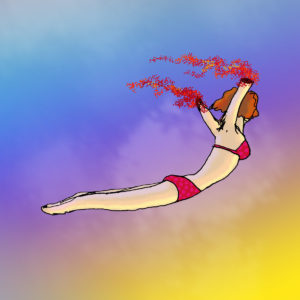 At the end of 2019, Juliana Hatfield released an album of covers of songs by The Police. Like her record of reinterpreted Olivia Newton-John songs the previous year, Juliana Hatfield Sings the Police demonstrated her inventiveness even when operating within somebody else’s framework. Blood, however, is a fever dream entirely of the indie legend’s own creation.

Her 17th collection of original solo material is an unashamed outpouring of the red stuff—the sonic equivalent to that elevator scene in Kubrick’s The Shining, albeit not quite as terrifying. Or at least not the same kind of horror. On “Nightmary,” for example, she laments the state of the world over an uplifting yet awkwardly melodic chug. “I’m living in a nightmare and I can’t wake up / The whole world is controlled by fascist, bloodsucking thugs,” she sings with almost cheery nonchalance, before immediately mourning how she “lost another friend to Jesus.” A short while later she sings (literally) one of the most hard-hitting lines on the album: “I had to punch myself in the face to get myself out of bed.” There’s an insouciance to the delivery, but it nevertheless captures the pernicious evils lurking in plain sight in this ever-dystopian country, all of which manifests itself in her crimson, image-rich lyrics.

One of the best examples of that is found in the next, almost early-Eels-y, song, “Had a Dream.” In it, Hatfield—or the character in her song, or both—recalls an act of murder committed while she was sleeping: “You staggered, screaming bloody and unbelieving that anyone would ever punish you for all of the traitorous things that you do.” And then comes the real kicker: “It was a very American dream.” That line completely shifts the focus from private, personal violence to a more public and political one. There are also, undoubtedly, parallels to be drawn between the song’s title and subject matter and Martin Luther King Jr.’s famous 1963 speech, but while the gore on these songs is unrelenting, the proselytizing is more subtle—more to be dug up than buried beneath. At the same time, her disenchantment and disgust is undeniable.

Interestingly, “Splinter” goes against that grain to some extent. Riddled with loss, it offers up a more emotionally delicate and vulnerable side to the album, but remains a seething indictment of post-Reagan politics in the U.S. and the late-stage capitalism that rules this country, the terrorism of which has been exposed for all to see as a result of the coronavirus pandemic: “I plan on winning the lottery / Move to the ocean / Away from all the monetization of every little thing.”

Musically, it’s really only the jittery, abrasive, and unnecessary quasi-funk of “Chunks” that doesn’t sit particularly well, though its hyperviolent words (“Someone’s gonna take your hand / And break every finger / Shove a tube sock in your mouth / To stop the sound from coming out”) fit perfectly with the rest of the album, like a screwdriver in an ear canal. It all comes to a climax with “Torture,” an easy-going song that dwells on the more psychological aspects of its title than the physical, but which also extend to that widescreen, universal outlook that permeates this record. “Wrest your soul / Out of control,” Hatfield sings almost gleefully. The song’s sunny disposition is very much at odds with that message, but—as with the rest of this album—there’s never a moment that you don’t believe what she’s singing.