The mega-box set gives rabid fans something to hold onto, stuffing the band’s innovative discography into an immense treasure chest.
Menu

The mega-box set gives rabid fans something to hold onto, stuffing the band’s innovative discography into an immense treasure chest. 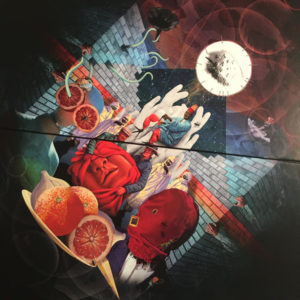 By 2012, for Cedric Bixler-Zavala and Omar Rodríguez-López six albums and 10-plus years of The Mars Volta was enough. But was it really? Had the magnetic Tex-Mex punk-prog ensemble from El Paso with roots in At The Drive-In really exhausted its gorgeously eerie golden tones and cluttered Latinx rawk-out possibilities? Or was the responsibility of invention and reinvention too much to bear, despite how ferociously fearful and devil-may-care the duo’s aesthetic manifesto sounded from its start?

The mega-box of La Realidad de los Sueños gives rabid fans and the more-than-merely curious each something to hold onto, as it portrays the efforts of Rodríguez-López (guitar, producer), Bixler-Zavala (vocals, lyrics), Juan Alderete (bass), Marcel Rodríguez-López (keyboards, percussion), and Deantoni Parks (drums) as both a forward-back time machine of craft, multiculturalism, and innovation stuffed into an immense treasure chest/magician’s hat filled with a seemingly never-ending array of tricks and triumphs. Commencing with TMV’s debut EP Tremulant (so much better, spookier, noisier, and futuristic than I’d remembered), and collecting all six of their albums and more junk than a hoarder’s house (badges, pins, glasses), this 18-LP box set, limited to 5,000 vinyl copies, is breathtaking in its scope.

The six studio albums remastered by Chris von Rautenkranz are akin to the bass-bolstered and nuance-driven new production given to King Crimson’s progressive catalog from genius sonic sprucer Steven Wilson. Making already boldly blasted-forth albums bolder still is no easy feat, yet von Rautenkranz gets it right at every turn; especially where Bixler-Zavala’s primal howl and soulful scowl is concerned.

Still, it’s the box set’s odds and sods that bring it all home for TMV. From thought-lost fare such as a tight, funky alternate take on “Eunuch Provocateur,” the heart-stopping beloved bootleg, “A Plague Upon Your Hissing Children,” the roughly raw and decidedly down-and-dirty Landscape Tantrums full LP of previously unreleased tracks, and a roller coaster thrill ride instrumental “Mr. Muggs” from 2008, having the Mars Volta vault picked clean is an exercise in divine intervention.