The retrospective on the artist, whose work you may know from Pavement and Silver Jews album covers, has nearly reached its Kickstarter goal.
Menu

The retrospective on the artist, whose work you may know from Pavement and Silver Jews album covers, has nearly reached its Kickstarter goal.

Steve Keene Art Book: Live from Subliminal Projects is the first-ever art book attempting to tell the story of this painter’s career by showcasing the entirety of his work (over 200 unique pieces) from his 2016 exhibition at Shepard Fairey’s Subliminal Projects Gallery. This colorful coffee table book’s crowdfunding campaign commenced April 28, ends May 27, and, as of May 21, is about $10k shy of its goal. That’s the nuts-and-bolts of photographer/producer/artist manager and advocate Daniel Efram’s push to get the book finished and published. From there, the story of the working relationship between Keene and Efram—to say nothing of Keene’s fuzzy logic artwork—is pure joy. 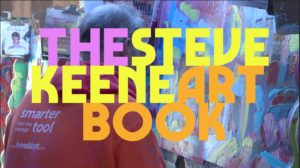 On a personal note, I can remember not only buying his work in small batches, but also first receiving his mod, rustic paintings for free in the highly irrational but delightful indie rock ’90s, when Girlie Action PR and he generously sent out commissioned Keene paintings as gifts for its favored press people. Beyond just feeling glee, seeing his sketchy Expressionist work and feeling the wood slats in my hand, Keene’s work comes from a place of awe and joy, the pleasure of loving the music and musician he’s portraying (say, Pavement, for whom he famously did the cover for their Wowee Zowee album, or Apples in Stereo who Efram happens to manage), and loving to see viewers and appreciators handle his painted pieces as if they were cradling a newborn baby’s head for the first time. 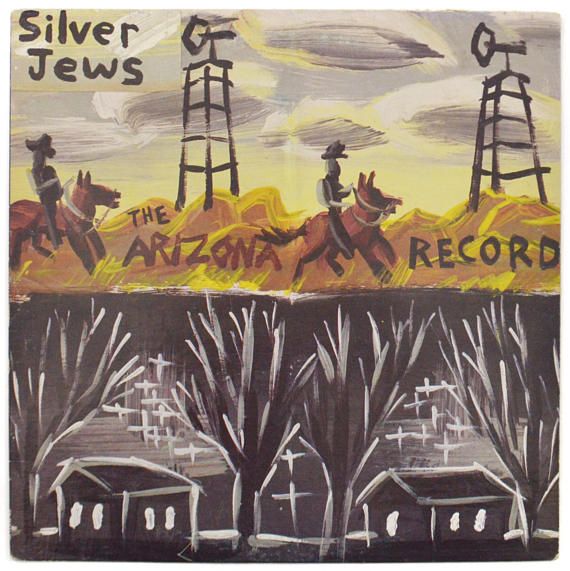 “I’ve known and worked with Steve for decades at this point,” says Efram from his New York City studio. “Listening to your Girlie Action story, I can tell you that his generosity draws people to him, let alone loving his work. Girlie Action is actually working on this book project with me out of love and appreciation for Steve Keene. That’s a part of why I’m doing it—love and appreciation, mine and everyone else’s whose life and work he has touched. There is a tremendous amount of good will toward him for what he does and who he is.” 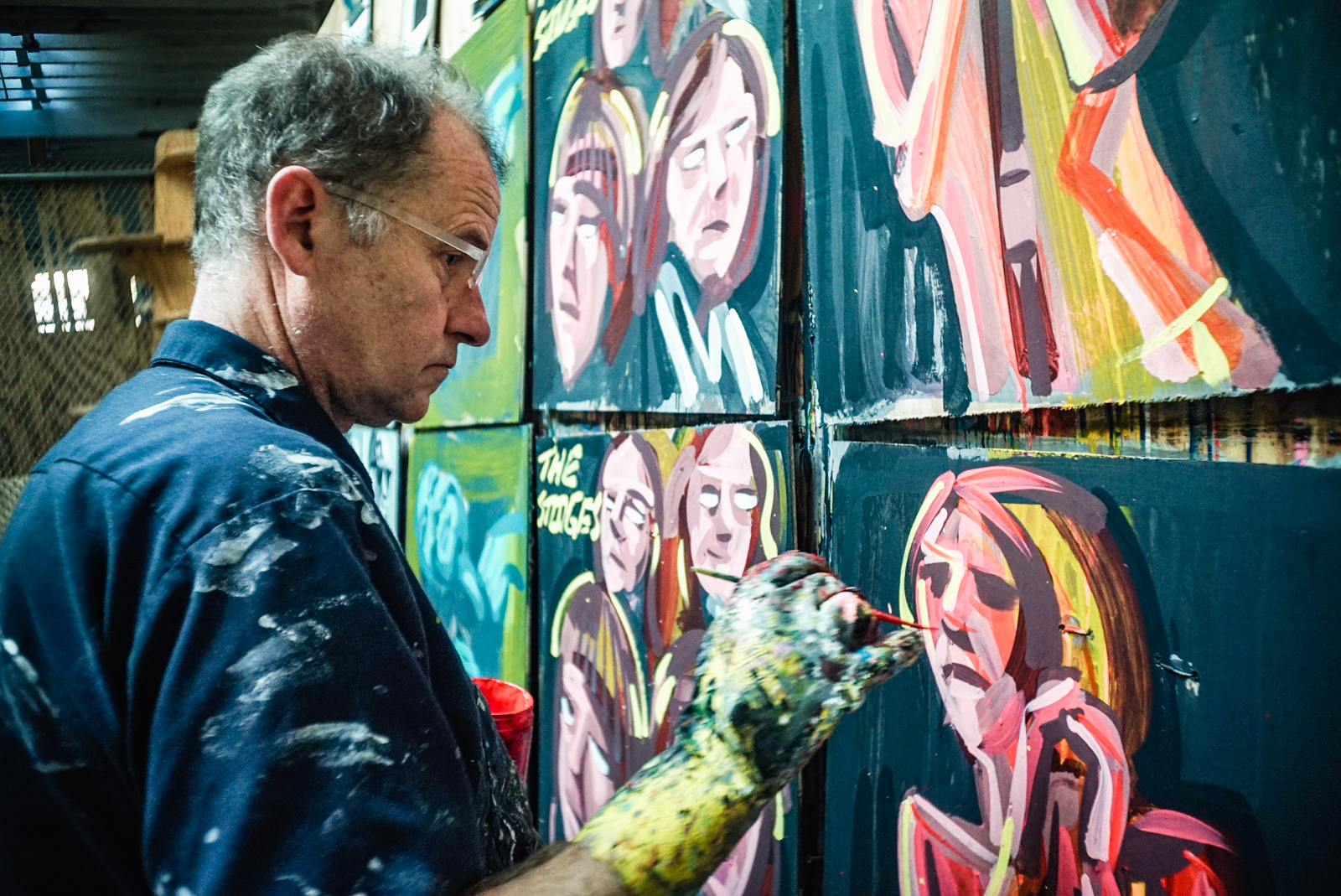 That’s just how it works with Keene. “This guy must be the most prolific artist of all time and his process is fascinating,” Shepard Fairey shared over email. “Lots of people say ‘art should be accessible to everyone’ but Steve really put this into action,” wrote Superchunk’s Mac McCaughan. 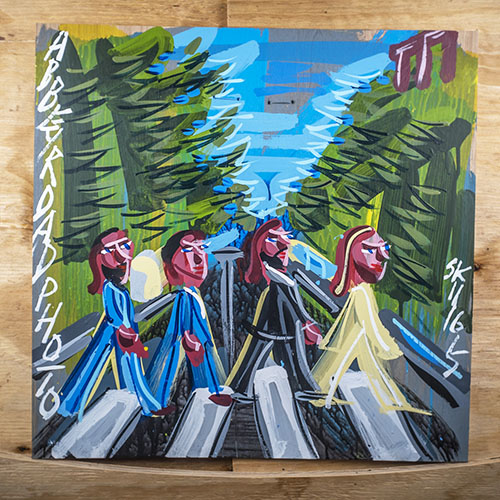 Along with working together on the Fairey Gallery exhibition that the upcoming book is based on, Efram first brought Keene in on the album artwork for Threadwaxing Space Live: The Presidential Compilation 1993-1994 on Zero Hour Records, where the photographer worked as a production/label manager. Keene, as is his want, would take large hand-cut pieces of wood (around 15 feet long) at his studio and hang them from ceiling rafters, dragging on the floor, and cutting them up into hundreds of painted pieces that he would sell in small batches. “Steve had his own merch table at shows,” recalls Efram. 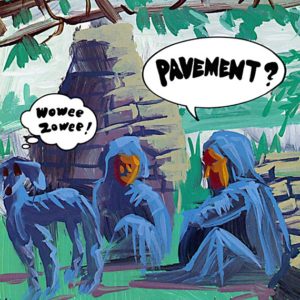 “That was just the start of our working relationship—up through me bringing him on to do the cover for The Klezmatics’ Woody Guthrie tribute in 2006 [the album, Wonder Wheel (Lyrics by Woody Guthrie) won a Best World Music Grammy surely due in part to Keene’s gorgeous, stately art work] to the present with The Apples in Stereo’s Robert Schneider releasing a song about Steve for the Kickstarter. Hey, he loves Steve, too, but you know, Robert wants a copy of that book.” 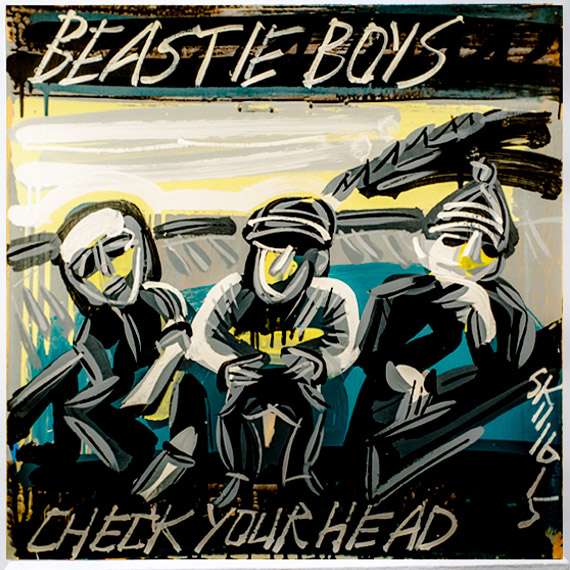 So why does Steve Keene’s work matter, beyond its volume, beyond its reach into the innocent soul of his subjects? Joy. Pure and simple. “Absolutely, joy. Even starting when you receive his artwork in the mail. Part of the process when you get a package from him—he sells his work in six pieces for $70 on his website, including shipping, and you don’t get to choose—and it’s always a delightful surprise. One that comes from a craftsman, a hand that painted this as a gift, almost. You ordered it a month ago, opened it, and didn’t know what to expect. That is as much a part of his art as its creation—the beautiful nature of how he operates, the discovery, the absolute unexpected glee.” 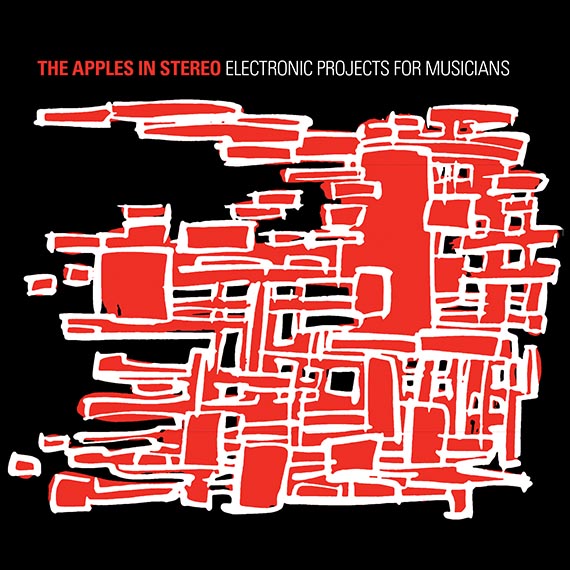 And why is The Steve Keene Art Book happening beyond the fact that Efram has a large collection of his work and curated, then photographed, the 2016 Fairey Gallery exhibition? “Because there are no books or collections of his work,” says Efram. “Because his work has never been placed in critical context, given contemporary perspective, or appreciated by art historians. Because his work needs to be out and a large part of the universe. Because his fans want something that, though it can never come close to being ‘completist,’ paints a picture of its own.” FL 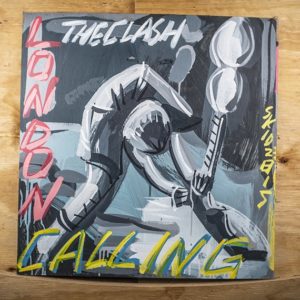