Snarky and self aware, depressed but electrifying, this record’s heady songwriting contains multitudes. 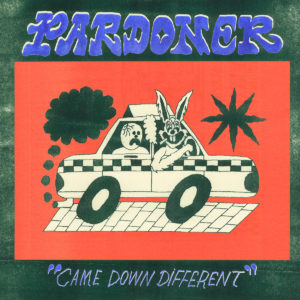 San Francisco rockers Pardoner might make music that sounds like Wire or The Replacements, but spiritually the band’s beer-soaked cynicism is in line with the wonderful chutzpah of a corny arena rock act like Thin Lizzy. Where the albums released before Came Down Different toed the line between DIY favorites Toner and Ovlov, the band’s third effort finds them coming into their own as the most captivatingly goofy guitar act since Viagra Boys. Snarky and self aware, depressed but electrifying, Came Down Different’s heady songwriting contains multitudes.

Coming to life in the wake of guitarist/vocalist Max Freeland’s relocation to Canada, Came Down Different was recorded in just two days. Enlisting the help of Jack Shirley, a producer who’s worked with artists like Deafheaven, Joyce Manor, and Jeff Rosenstock, these songs feel frenetic but never rushed. Came Down Different doesn’t play like the work of a band cutting corners to maximize their time in the studio, but instead captures the energy of a wonderfully sloppy live set. Where Pardoner’s first two records evoked Sister-era Sonic Youth, these cockier, sweatier tracks dwell in the same vein as more straightforward groups like New York Dolls and The Modern Lovers. It’s not hard to imagine songs like “I Wanna Get High to the Music” and “Totally Evil Powers” being laid to tape at four in the morning after a full day of putting down as much material as possible. The tracks’ wired arrangements sound like the work of musicians railing shitty coffee to stay attentive as a late night turns into an early morning.

The components of Pardoner’s songs are simple, but Came Down Different finds the band embracing a formula that feels absolutely massive. Scuzzy rhythm guitars ride atop pounding drum grooves. Meanwhile, spastic lead parts fill up the background, embracing sounds that are simultaneously vile and extremely satisfying. “If you need me / I’m watching TV in the oven with a gun to the back of my head / Fuck,” Freeland hoarsely bellows on the single “Bunny’s Taxi” over broken-sounding noodling that threatens to blow out the high end of your speakers. If Pardoner weren’t so convincing at playing the part of a shaggy post-punk band, these songs could pass as a parody of a CBGB staple like Richard Hell or Television.

A Bay Area sleeper favorite who chose to cut their teeth in a small scene rather than tour extensively, Pardoner have always kept a low profile. Because of this, it can be surprising that Came Down Different oozes both talent and personality. “Malkmus, Springsteen, McCartney, Mackaye / Getting all my wisdom / From a dumb old guy / I hope the apple falls far,” Freeland sings on closer “Fuck You!” For a band who’ve chosen to relegate themselves to Oakland warehouses and Mission District dives, the venom that courses through Came Down Different could be potent enough to stop the entire punk scene in its tracks if the band wanted it to.