The Bay Area underground favorites’ first album in over a decade is their stiffest, most familiar release to date.
Menu

The Bay Area underground favorites’ first album in over a decade is their stiffest, most familiar release to date. 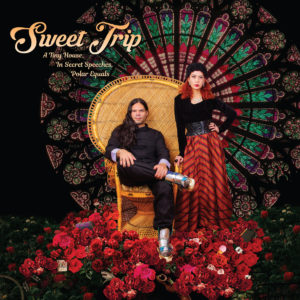 Touting a singular blend of shoegaze, electronica, and glitch, San Francisco’s Sweet Trip have spent the past two decades amassing a loyal-but-lowkey following. It can be hard to tell whether Roberto Burgos and Valerie Cooper are overlooked by indie rock–centric media or if they’re just plain reclusive, but the duo have canonized their work with the help of Rate Your Music message boards. Arriving 12 years after 2009’s masterful You Will Never Know Why, Sweet Trip’s latest, A Tiny House, in Secret Speeches, Polar Equals, finds the duo comfortably embracing their formula. Soaring melodies are complemented by IDM-indebted synthesis and peacefully strummed acoustic guitars. While it was supposedly recorded with the same spontaneity as their prior endeavours, it’s the stiffest, most familiar release from Sweet Trip to date.

The record opens with a cacophony of digital noise and mashed percussion on the track “Tiny Houses.” After more than a decade of silence, Burgos and Cooper flaunt dissonance until robotic, heavily produced voices emerge out of the ether. As Autechre-esque effects whiz in the background, it seems like Sweet Trip have hit their stride once again. However, as the song bleeds into “Surviving a Smile”’s humid, blissful chillwave, things take a turn for the less inventive. “In Sound, We Found Each Other” settles for downtempo shoegaze a la Astrobrite or Loveless, while “Eave Foolery Mill Five” is borderline lounge music. Meanwhile, “The Weight of Comfort, This Rain Is Comfort, This Rain Is You” is certainly intricate, but Phil Collins-y percussion and a sleepy melody cull the sounds of a cruise ship more than they do computer generated surreality. Co-opting the sonics of the late-aughts blogosphere, vaporwave, and festival-friendly dream pop, the front half of A Tiny House tends to play like a prog rock band covering the Twin Peaks theme.

Clocking in at an hour and nine minutes, Sweet Trip’s latest drags on, largely blurring together. Brevity has never been the duo’s cup of tea, and ten-plus minute lo-fi jams make up some of the project’s most interesting work. However, A Tiny House lacks the exciting, genre-eschewing propulsion that made the best moments on Velocity : Design : Comfort so engaging and unforgettable. Even the record’s cover, a tripped-out photo of the band, feels jarringly normie when looked at alongside the act’s discography on streaming platforms. It seems that the duo’s 12-year hiatus mellowed out their penchant for challenging-but-vibrant songwriting.

Although the record is the least invigorating Sweet Trip effort yet, it’s not without its bright spots. “Chapters” uses a pretty melody that evokes ’70s French pop to lay the framework for a neon instrumental that brings to mind Miami Vice in the best way. “Zafire Melts the Heart in Modulation” employs gorgeous beat-making that carries the subtlety of a great Nick Zammuto composition. Meanwhile, the rave-ready “Randfilt” paints an intriguing soundscape that offers a reminder as to why Sweet Trip’s peers include Oval and Squarepusher. On an album that largely plays into the duo’s rock sensibilities, the song is a welcome reminder that the band are capable of working around more than just fuzz pedals and half-time drum grooves.

A Tiny House is best when listened to passively, and it takes two or three active listens to pinpoint the elements that feel phoned in. Additionally, it’s Sweet Trip’s most objectively approachable release by a mile, and even the album’s most underwhelming moments would be more welcome if played in a casual social setting than the most impressive cuts from the band’s back catalog. What makes it fall flat is that it plays like a late-era comeback record from an underground favorite whose otherwise masterful discography is marked by variety and fizzy experimentation. While the album isn’t irredeemable, it makes me hope that it takes Sweet Trip less time to put out a follow up that recaptures the project’s verve.