WATCH: METZ Makes Some Hardcore Pancakes In the “Not the Video” Video for “Acetate”

The group’s second album is called “II,” naturally, and is out May 5 via Sub Pop.
Menu

WATCH: METZ Makes Some Hardcore Pancakes In the “Not the Video” Video for “Acetate”

The group’s second album is called “II,” naturally, and is out May 5 via Sub Pop.

When the punk trio METZ crashed onto the scene (with style) in 2012, the Toronto-based group quickly garnered an immediate following within and without of the hardcore community (example: The One and only Keanu Reeves).

After an appropriately vicious touring circuit, METZ retreated to Canada to spend six months writing and recording II, an album that was conceived as deliberately bare and intense. As frontman Alex Edkins explains:

To get an idea of what was harvested by this approach, you can listen to the insane album opener “Acetate,” which ignites and spreads like a meth lab fire. The accompanying video (which is distinctly labeled as being “not the video”) features a recipe for some punk rock pancakes, and will get you kinda sorta hungry for one of those hangover-type breakfasts.

In addition to the album cover and song titles, the band has also announced a fresh batch of tour dates. You can check out all that info below. 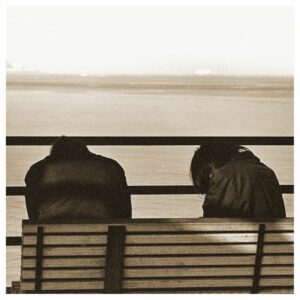