A Place to Bury Strangers, “Hologram”

There’s still darkness present on the noise rock band’s latest EP, but it’s more of a shadow than an abyss.
Menu

There’s still darkness present on the noise rock band’s latest EP, but it’s more of a shadow than an abyss. 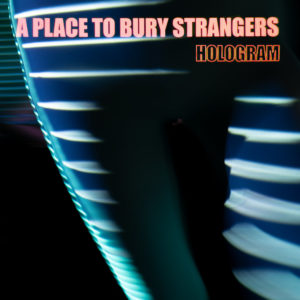 Right smack in the middle of this new EP from A Place to Bury Strangers, there’s a lyric in “Playing the Part” that sums up the attitude that flows through the veins of its wonderfully dark and dreary songs. Over a buoyant (and unusually uplifting) riff—one that treads the line between ’60s-style surf rock and ’80s goth gloom—vocalist Oliver Ackermann offers this existential aphorism: “Life goes on / With or without us, don’t you know?” His voice sounds, as ever, almost as if he’s half-dead, but despite the hostility of the rest of the lyrics, there’s also a sense of positivity. That’s something succinctly conveyed in the following verse: “When we’re gone / We can’t have fun, don’t you know? / Who doesn’t enjoy the sun? / Don’t pretend.”

Anyone who’s followed the nihilistic New York noise-rock/shoegaze band since they started in the early 2000s will know that’s a jarring sentiment. This is, after all, an outfit whose songs are usually as lugubrious as the lyrics they carry, whose irascible walls of sound and squalling guitars are discordant, incredibly loud expressions of the displeasure of not just being alive, but the overbearing existential burden of being human and, as such, self-aware. The band’s career has, to date, been one perpetual dark night of the soul, yet here Ackermann is rejoicing in…the sun? There’s still darkness present, but it’s more of a shadow than an abyss. What’s more, the feedback, the buzzsaw guitars that have come to define the band’s sound, are absent.

It stands out all the more because the songs on either side overflow with that trademark acerbic bleakness. Opener “End of the Night” is an outpouring of bitter, bilious, broken-hearted (self-)invective—“Now that you’ve bled me dry / Now that you hope I die / These things you’ve taken are less than you’re making / I’m always the loser”—while “I Might Have” sounds like Hives-esque rock ’n’ roll if the Swedish band were overwhelmed with dread and despair. On the other side, “In My Hive” sounds less like The Hives and more like a space-age anti-love song, full of odd, experimental bursts of paranoid noise, while “I Need You” is an atmospheric, almost-beautiful expression of ultimate pain and grief, loss and loneliness. It makes for a truly arresting EP—one that bodes incredibly well for the future, even if, as that last song fades into a sad oblivion, there’s very little future to be found in here.