My Tree, “Where the Grace Is”

The Brooklyn duo’s second LP is a well-intentioned, slow-burn rumination on the gripes of American social and economical plight.
Menu

Reviews
My Tree, “Where the Grace Is”

The Brooklyn duo’s second LP is a well-intentioned, slow-burn rumination on the gripes of American social and economical plight. 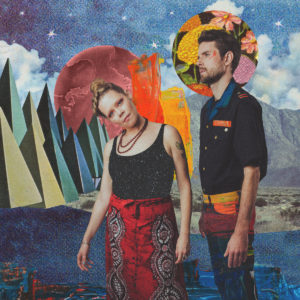 My Tree
Where the Grace Is
SELF-RELEASED
7/10

The disco-laden, socio-political tinge of self-proclaimed “astral-leaning” Brooklyn duo My Tree bisects the club culture of an entire continent. The band—formed in the early 2010s under the name Maitri, fusing the kaleidoscopic vocals of acclaimed alto saxophonist Caroline Davis with the patient, evolved instrumentalism of virtuosic keyboardist Ben Jamal Hoffmann—has just released their second full-length record, Where the Grace Is, a follow-up to 2017’s After Glow: a well-intentioned, slow-burn rumination on the gripes of American social and economical plight, brimming with bops bulked-up on heavy instrumentation. Where the Grace Is is a balancing act, shouldering the desire to speak up about the inequities of the world without feeding into the clichéd, performative lyricism in the catastrophic wake of 2020. The product is not a beautiful record as much as an urgent one. The duo’s chemistry is palpable, each tacitly finishing the other’s sentences, parsing Davis’ joyous vocals with Hoffmann’s mature hardware.

Where the Grace Is feels familiar but uncomfortable, citing empathetic returns to various tragedies in ways that refuse heavy-handed muddling. Each entry tipsy on optimism and allyship is juxtaposed by heavy returns to specific trauma. On lead single “Liteshine,” Hoffmann’s drum machine programs beneath squelching analogue synths and the track lends itself as an ode to the sun, providing subtle, poetic commentary on the looming climate crisis. But Hoffmann’s arrangements go quiet during Rico Sisney’s verse on “Run and Rag On,” giving the Chicago emcee enough space to say his piece, soundly critiquing the Reagan era and touching on the disenfranchisement of Black Americans during modern Jim Crow. “I’m waiting by the faucet for it to trickle down / Four decades later but any minute now / More than a billion dollars to the War on Drugs / Black and brown people knew that was a war on us,” Sisney raps.

The record’s centerpiece is “Our Land Oh,” Davis’ expungement of grief following the 2016 Pulse Nightclub shooting, in which the vocalist tries reckoning with the horrific targeting of LGBTQIA+ people. “Why does the land break / When we need to be strong,” she sings near the end of the track, against the pattering pulses of Hoffmann’s keyboards.

In the four years since their last record, My Tree has sat behind and listened, inserting a critical lens into their sophomore release. The duo clearly has a lot to say, but on entries like “View” and the record’s title track, they’re hesitant to say what it is that’s specifically on their mind. It’s impossible to shed privilege and power when discussing the suppression of others on your own album, but My Tree does make an earnest attempt at considering the imperfections and injustices affecting communities they don’t belong to, mindful of not sitting on their systematically gifted platform for too long, offering compositional space to marginalized people, and making a communal record at times as hard-to-swallow as it is welcoming.