A Small-Scale Introduction to Allison Ponthier

With her debut EP “Faking My Own Death” out this Friday, the songwriter discusses making the leap from Texas to NYC, recording with Lord Huron, and becoming a cowboy.
Menu

A Small-Scale Introduction to Allison Ponthier

With her debut EP “Faking My Own Death” out this Friday, the songwriter discusses making the leap from Texas to NYC, recording with Lord Huron, and becoming a cowboy.

Allison Ponthier has a thing for miniatures and dioramas. The 25-year-old singer/songwriter is giving me a virtual tour of her apartment located in Bushwick, and the place’s biggest conversation starter is Ponthier’s production room. Containing a colorful rack of clothing she calls her “costume closet,” as well as several vintage movie posters, the main attraction is undoubtedly Ponthier’s desk, a workspace adorned with an eclectic mix of handmade figurines and small-scale sets—some Ponthier has made herself, others she’s acquired from like-minded enthusiasts. “I don’t know what it is but tiny versions of actual real-life things, I love them,” she says. “There’s something about tiny things that just make serotonin in my brain.” At one point Ponthier grabs a nearby piece and holds it up to show me—an intricately crafted diorama of a dilapidated shack located in the middle of nowhere, the kind of dusty, forgotten outpost likely frequented for the chance of late night UFO sightings.

This kind of eerie trinket, of course, ties into Ponthier’s other obsession—if given the option of her own genred origin, Ponthier would likely choose campy sci-fi horror. “I wasn’t really allowed to watch scary movies when I was a kid,” she admits. “The first horror movie I ever saw was the 2005 remake of House of Wax—and I was sold. I’d never seen anything like it, and from then on I’ve always loved scary movies. And then the B-movie, camp elements I think came from also really loving movie musicals as a kid: West Side Story, Oklahoma!, and Little Shop of Horrors. I think the movie-musical-to-campy-film-addict pipeline is strong. There’s something really special about movies that don’t have a huge budget, that are obviously one person’s passion project. I’m really invested in people that kind of DIY their own alternative universes. I love Barbarella—it has maybe the best set design and costume design I’ve ever seen. There’s something so bizarre about it. Nothing makes sense. The plot is not very strong, but it’s so captivating the whole way through. As an artist I’m just trying to recreate the feeling I had watching that film for the first time.”

This week Ponthier will be making her first official effort in this endeavor with her debut EP Faking My Own Death. A beautiful collection of country songs that evoke the rainbow-colored pop of Kacey Musgraves and Lana Del Rey’s cinematic glamor, the songs’ confessional conviction are poised to make Ponthier a regularly mispronounced name this year (for the record, it’s “pon-tee-ay”).

“A lot of the things that most people are ashamed of, or feel like they should hide, are the best parts of them when they get older.”

Raised just outside of Dallas, Texas, Ponthier spent her youth growing up in a suburb not all that dissimilar to the football-centric environs seen on Friday Night Lights. Ponthier was a bit of an outlier. Shy, introverted, and ADHD, she says she had trouble relating to other kids. “I always felt a little bit different from other people because I was processing things in different ways. I didn’t always know how to handle my emotions, and I would often get sucked into whatever my hobby or interest was at the time. So I would just hang out by myself watching movies, making music, drawing weird creatures.”

This outsiderness only deepened when Ponthier found herself feeling attracted to other girls. “When it comes to my sexuality I think I just didn’t know what that was,” she recalls. “I truly thought that I had invented the idea of being gay—because I didn’t know any other gay people until I got older. I also think that even if I wasn’t surrounded by violent acts of homophobia all the time, being silent about it—or viewing it as something that you should hide as a courtesy—was really harmful in itself because it almost felt like I would be inconveniencing other people by coming, or I would be a burden I came out.” 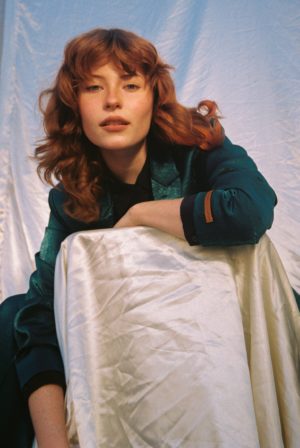 Initially going to the University of North Texas to study music, Ponthier left to make a life as an artist in New York City. “Something broke in my brain,” she says. “I just thought to myself, ‘All I want to do is write songs.’ So I dropped out of school and I moved. It just felt right. I’m not an impulsive person, but something just said, ‘You need to be somewhere else.’” Working a variety of jobs that included modeling, selling jewelry, and even doing social media for the American Museum of Natural History, Ponthier continued to develop her songwriting skills. It was also during this stretch of time that she met her girlfriend and came out of the closet. The vulnerability of the experience ultimately inspired Faking My Own Death’s first single, “Cowboy.”

“I think that a lot of people go through that experience when they grow up,” says Ponthier. “A lot of the things that they’re ashamed of, or feel like they should hide, are the best parts of them when they get older.” Opening with the lines, “It took New York to make me a cowboy / Now everybody knows,” “Cowboy” proved to be a breakthrough moment for Ponthier, who had been restricting her more personalized point of view up to that point. With the help of her managers Ponthier soon found herself workshopping new material with the likes of Ethan Gruska—best known for his production work with Phoebe Bridgers—as well as veteran songwriters such as Rick Nowels, Adam Melchor, and Semisonic’s Dan Wilson, exploring subjects such as social anxiety (“Hell Is a Crowded Room”), self-doubt (“Harshest Critic”), and reconciling one’s past (“Tornado Country”).

“The most difficult relationship you’ll probably ever have is with yourself,” says Ponthier. “I’ve changed so much. I think this EP has honestly changed my life. I’m really comfortable in my own skin, I embrace the things that I used to hide from other people. I’m more comfortable expressing myself in the ways that I’ve wanted to forever. I’m still a really sensitive person, and in a weird way I think the reason that a lot of my songs are about me being nervous, or having a complicated relationship with myself, or having anxiety, is because it takes away the power it holds over you. If you’re honest about your anxieties and fears, I think that there’s a lot of people that feel the exact same way and would echo that. It’s something that has always helped me—just being more honest about how I feel in a moment.”

“If you’re honest about your anxieties and fears, I think that there’s a lot of people that feel the exact same way and would echo that. It’s something that has always helped me—just being more honest about how I feel in a moment.”

Unlike so many new artists who released their debut records last year at the height of the global pandemic, Ponthier is actually poised to introduce herself to all manner of live audiences this fall supporting Lord Huron on her first-ever tour. It was on Lord Huron’s latest album Long Lost that listeners likely first heard Ponthier when she dueted with frontman Ben Schneider on the ballad “I Lied.” “There really was no strategic business decision to picking me, but I heard through the grapevine that Ben had liked [the demo I recorded for him], and the next time it was safe to travel I went to LA to Whispering Pines. I felt like I was gonna throw up. I had never worked with another artist before, especially not an artist as successful as Lord Huron. I was convinced that I was doing a bad job in my head. I was like, ‘I’m messing this up.’ But I finished recording and I went into the control room, and Ben was so sweet. He said, ‘Would you ever want to perform this live with me?’ And I thought, ‘Oh my god, I think I got it.’”

As Ponthier moves into a new stage of recognition with the release of Faking My Own Death and performing her songs live, she says she’s still hard at work completing her debut full-length. For the moment, however, she’s quite comfortable keeping things on a relatively reduced scale—miniature, even. “I’m literally always writing,” she says. “And the goal is, yeah, to eventually do a full-length album. But I love the idea of doing an EP, because I think when you’re just introducing yourself to the world, you want to have that kind of smaller project to show people. You have to practice before it’s your big day.” FL