The duo discuss unraveling the riddle of the unconscious on their second album together, “Animal.”
Menu

The duo discuss unraveling the riddle of the unconscious on their second album together, “Animal.”

How do you bring up the colorful moss creature in the room without asking about the colorful moss creature in the room? Throughout my conversation with Laura Marling and Mike Lindsay, about their collaborative project LUMP’s sophomore album Animal, I’ve been trying not to ask what or who “LUMP” is exactly. But as the conversation with the veteran musicians comes to an end I finally succumb to the impulse. As the question hesitantly leaves my mouth, and I’m thinking about the countless times they’ve probably been asked it, Lindsay breaks into a big grin with a mischievous laugh and Marling is smiling ear-to-ear while resting her head in her hand. I can tell the two are looking at each other over Zoom as if I’ve been caught in their playful trap. Lindsay points to the camera: “You’re LUMP,” he says matter-of-factly.

Marling jumps in for clarification. “LUMP was originally like a sort of mascot to highlight the fact that it’s not me or Mike, that it’s something bigger or better than us both.” The name itself is credited to her young goddaughter—eight-years-old at the time—who screamed the word out as an answer to Laura asking her what she should name the new band. “It’s useful to take some of the limelight away from whatever we are,” Lindsay adds.

Animal came about much like their first self-titled album. It wasn’t planned. They didn’t even tell anyone they were making it. In his studio in Margate, England, Lindsay would pre-produce with Marling writing to the music on the spot. “It’s like turning up every day without knowing what you’re doing. Which I very rarely have the opportunity to do. Everything I do is quite methodically thought through before it’s committed to tape or whatever,” she says. There was no guarantee of a follow-up to their 2018 debut, but in May of 2019 LUMP started to reform. The result is something archaic and otherworldly. There’s dirt, blood, and a fairy king. Guitar riffs wobble and flutes cry out elegantly. Lindsay weaves together Marling’s stream-of-conscious renderings on societal convention and technological evolution with propulsive production.

In many ways the undefinable nature of LUMP is why Lindsay and Marling smile at such an obvious question. Further excavated on this second album, LUMP is wonder. It’s the childish nature that never ceases, even when we grow older. In our conversation, Laura Marling and Mike Lindsay expand upon this concept, as well as detail avoiding eye contact at the studio, psychoanalysis and social media, and LUMP language. 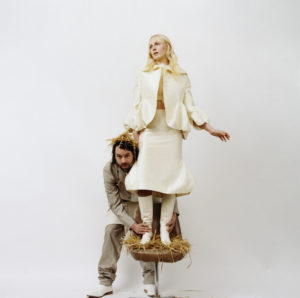 Can you paint me a picture of what an average day in the studio was like?

Mike Lindsay: Well, it looks like this room, but there’s a big mixing desk and loads of gubbins and knobs and toys. It’s very hot. I blocked out all the sunshine. Laura sort of lounges back here with a massive notepad and a large pen. And I sit here and I don’t look at her.

Laura Marling: I would maybe just summarize it by saying I come on the train with snacks. I sit behind you all day until I get frustrated and go downstairs, make coffee, and write lyrics. And then you don’t look at me. And by the end of the day, usually, we’ve got a song.

ML: And then we’re allowed to look at each other and maybe even have a glass of wine. Yeah, it’s good. It’s quick. It’s condensed.

LM: There’s not much interaction. We didn’t know each other before we made the first [album]. So we sort of tried to replicate that by not bothering to get to know each other while we’re making the second one.

ML: I think we know each other better now, but it’s true. That’s the musical relationship we have.

“There’s not much interaction. We didn’t know each other before we made the first album. So we sort of tried to replicate that by not bothering to get to know each other while we’re making the second one.” — Laura Marling

Is the “not looking at each other” part in apprehension of not wanting to mess with each other’s flows?

LM: It’s mostly because Mike sat in front of me, so he can’t be working on the computer and looking at what I’m doing.

ML: It’s logistical. But there’s an element of respect. You’ve got nowhere to hide in this room, and I could just leave, but I like being part of that process. I wonder if me being present somehow sort of means that you’re focused at that point. Whereas maybe if I leave the room, you might just—I don’t know. I’m like a sort of invigilator in an exam [laughs]. We don’t think about it that much.

What was the approach to vocals like on this album? There’s a ton of whispering and layers of vocals, which I love. And it sneaks up on you in creepy ways at some points. It adds to that animalistic theme.

LM: On this album and the previous album I was writing the top lines, but Mike was also using my voice as an instrument, programming and putting it live as an instrument. A lot of how you ask me to sing, Mike, is part of the production, isn’t it?

ML: Sometimes I’ll ask Laura to have a different inflection or to phrase it slightly differently than perhaps you would do with Laura Marling. With the idea that we would layer you up and get that kind of rainbow spectrum, those kinds of neighbor notes that not many singers can do and you can do. It’s really enjoyable to create a sort of blanket of Laura. It’s fun to explore. I don’t know if it’s more experimental or more accessible, this album, but we definitely tried more ideas. LUMP existed on this second album so we could sort of visage it being this world we’re trying to create.

I read that you were reading up on psychoanalysis when writing this. Do you see these songs as being connected and creating their own world, or as separate journeys?

LM: I’m doing a masters in psychoanalysis—I was reading a lot about it at the time. The first album was all based on things that I’d underlined in the Surrealist Manifesto and some nonsense poets that I liked. I like nonlinear things. I like the way that nonlinear sentences—not even nonlinear stories—can still hold a lot of meaning. Psychoanalysis is all about that. The unconscious is structured like a bad joke, basically. That dream imagery, dream logic, and dream language is like a terrible, useless riddle until you know the symbolic meaning behind it. So yes, there’s definitely a theme of that—that nothing should really make sense on the surface, but it should affect you somewhere.

“I don’t know if it’s more experimental or more accessible, this album, but we definitely tried more ideas. LUMP existed on this second album so we could sort of visage it being this world we’re trying to create. ” — Mike Lindsay

I was picking up on themes of faith and different beliefs, also the idea of control. I don’t know how intentional those are, but is the writing style stream-of-conscious or methodical like how you described your other work?

LM: My other music is very methodical, but this is very, very stream-of-consciousness. I agree there’s definitely themes there, they’re unintentional. Someone else pointed out that I say “ancient” a few times, which I hadn’t noticed. Hopefully there’s humorous sprinkles on top because the base level is very sincere—because the experience of being human, at the base level, is very sad and sincere, in my opinion. When we started making the record I was really interested in people looking at themselves in their phones, which is a very new thing for psychoanalysis to try and understand what the relationship is of you literally looking at your fucking face all day, which we’ve had to do through the pandemic, and what effect that has on the psyche.

What I’m interested in now is this fourth dimension that we’ve had no choice but to participate in in the pandemic: we’re all doing stuff on Zoom, we’re all using social media, and we’ve been extremely online. And that’s something psychoanalysis and all of the soft sciences haven’t really accounted for yet. It’s like there’s a new, disconnected, unemotional logic to the way we interact with each other.

My favorite track on the album is probably “Phantom Limb,” can you talk a bit about that one?

ML: That came together really quickly, for you, Laura, after you left the studio and went downstairs. It’s another strange timing—another track in 7/4—and I wasn’t sure how you’d find your phrasing. You came back and you hit this amazing entry point with your lyrics that I never would have imagined. It just rolls—it’s meditative and hypnotic in that sense. But it feels like when you’re singing, when it hits “We have some work to do,” it seems like a statement that’s much bigger than us.

“We’re all doing stuff on Zoom, we’re all using social media, and we’ve been extremely online. And that’s something psychoanalysis and all of the soft sciences haven’t really accounted for yet. It’s like there’s a new, disconnected, unemotional logic to the way we interact with each other.” — L.M.

LM: Lyrically, there’s actually a lot of David Sedaris stuff in there. There’s a great line in one of his books about his dad leaning over the table and his head catching fire and saying he looked like a happy king for a minute because he had a ring of hair. Writing lyrics in 7/4 is really unusual for the brain. It’s not iambic, which makes you think in a very different way. You have to sort of add an extra thing, which can sometimes be interesting and make for a strange-sounding sentence.

I’m curious how the one instrumental “Hair on the Pillow” came about. That’s also a reference to a lyric in “Animal.”

ML: When you’ve got a collection of songs together that feel like they live in each other’s cul-de-sac, there’s this really lovely part of making a record when you’ve kind of got them all together and they all start to speak to each other. And then you wonder what’s missing and which avenue you haven’t taken yet. I thought it needed a breather. It takes you somewhere into the darker side of the LUMP world, which exists throughout the whole record, but it’s nice to fully go there. The “hair on the pillow” lyric summed up an element of the LUMP animal versus realism and dirt. Then I put it through the vocoder and through the H949 and I thought it’s a bit like LUMP the being is present. There’s another moment, actually, that they’re present—on “Gamma Ray,” where I believe LUMP is saying “excuuuse me.” That’s LUMP saying, “I don’t think we’ve been introduced,” and then you hear LUMP’s name in LUMP language and it’s that “yaahhh.” You’ve got to have a bit of that on a LUMP album. FL