The Prophecy of Indigo De Souza

The songwriter invited us to her converted-church home to discuss her new sophomore album “Any Shape You Take.”
Menu

The Prophecy of Indigo De Souza

The songwriter invited us to her converted-church home to discuss her new sophomore album “Any Shape You Take.”

It might be understandable why a stranger wouldn’t think twice about entering Indigo De Souza’s home. It’s a renovated church in a small town outside of Asheville, North Carolina—and although there’s still a circular stained glass window of Jesus on the wall, two stripper poles make it immediately clear that this is no longer a functioning congregation. She and her herbalist roommate light up Jesus when they have parties, she tells me. Her dog Winston excitedly runs over as I begin to recognize the two giant paintings that adorn the walls on opposing sides of her living space—they’re the two paintings that serve as De Souza’s album covers for her first album I Love My Mom and her newly released sophomore album Any Shape You Take.

Fittingly, it seems like this church saved her in a way. Before the pandemic, the 24-year-old musician had the intention of moving to New York City. “Sometimes I feel like I’m in The Twilight Zone living here,” De Souza says of the small town where fewer than a thousand people live. It’s an unbelievable oasis with a downtown that ends only a minute after you pass the welcome sign. But there’s still an antique store, a tattoo shop, and a couple of cafes amidst its infinite rolling hills. Every road on the way to De Souza feels like a roundabout, with the trees bent and lush like a Dr. Seuss illustration.

As we’re sitting in a park by the river chatting, an old woman comes around with her dog stumbling around, sniffing the grass. “I’m gonna cry when Winston’s that old,” Indigo says, both of us staring at this strangely perfect pairing. Later, she tells me that part of the thinking in getting Winston was to help her become more acquainted with loss. “I can’t say for sure, but he’s most likely gonna die before anyone very big in my life dies. I need to experience some sort of close loss. I need some practice before I go through the big ones,” she says.

“Once you actually understand that people are mortal and everything is fleeting and temporary, then you’re able to appreciate things more and kind of see people in a more compassionate way.”

Although she’s never experienced the grief of losing someone close to her, De Souza explains that she thinks a lot about death. At age 19, she experienced a series of existential events—changes occurring in her brain and its perception of the world around her. “I broke through to a new understanding of things,” she says, hugging her knees. “The first time that happened, I was at a festival with my mom deep in the woods. She was dancing and she had this dress on where you see her back tattoo. I started to notice how skinny she was and I could see her bones under the skin moving. I started to really think about her muscles and blood. I realized how absolutely fragile she is, and that anything could happen to her. She could pass away at any given time. Anybody could pass away at any time.”

She laughs a bit, looking off to the side, “I think I knew that. Everyone knows that. That’s what happens: We die. But something about that moment, my brain fully understood that if she dies, then she’s gone. When she dies, there will be complete silence from her after that. And that will change my life. Because it will be like the biggest amount of grief I’ve ever felt.” She takes it a step in the direction of the inevitability. “My life was always headed toward grief.” 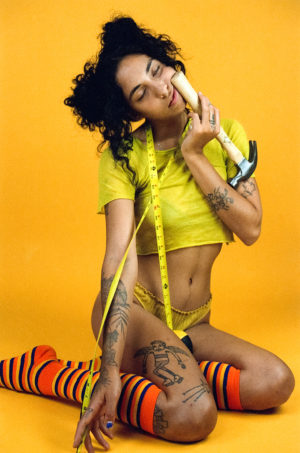 It was this realization that inspired her mother’s appearance within De Souza’s music—which is never something that’s fully apparent to her when she’s writing. Yet her mom becomes a symbol for appreciating life before it fades away. “Once you actually understand that people are mortal and everything is fleeting and temporary, then you’re able to appreciate things more and kind of see people in a more compassionate way.”

“It’s about me learning not to take things too personally and finding a really simple and fluid way to love people that doesn’t hurt. When you’re very attached to people in a way that’s more self-involved, it can really hurt when you feel loss. I think I’m a lot better at it now.”

All this emotion is tangible in De Souza’s music. It’s the nucleus of her rock sound that can veer entirely experimental, sewing dozens of screams together, as heard on “Real Pain,” or prove catchily to-the-point on “Pretty Pictures.” No matter the shape her songs take, her voice breaks through with skin-piercing honesty. She skillfully shifts from an airy falsetto to a gelatinous wail. Similar to Dolores O’Riordan, De Souza carries the weight of a crumbling world with a heart that’s been shattered and reassembled to process the pain alongside joy.

Throughout Any Shape You Take De Souza illustrates her evolution in learning how to love. “I loved in the wrong way for a long time and felt how wrong it was,” she says. But every song illustrates a ruthless compassion. On “Darker Than Death,” where distortion tears at the seams, she wonders what words she said to make it all go black. “When we both went blind / You wouldn’t even look me in”—she pauses—“Oh darling, you wouldn’t look me in the eyes.”

There’s no exposition or setting on Any Shape, but her feelings are stripped naked on the floor. “It’s also just about me learning not to take things too personally and finding a really simple and fluid way to love people that doesn’t hurt. When you’re very attached to people in a way that’s more self-involved, it can really hurt when you feel loss,” she says. “I think I’m a lot better at it now.”

“I think of the figures on my album covers as me and my mom. And I just want them to age with the albums. Growing and embracing each other in death. I mean, aren’t we all?”

Part of De Souza’s musical experience growing up comes from her mom ushering her to busk on the street at 11 years old. After being bullied in school, she was afraid that the public would have the same reaction to her music—that wasn’t the case, of course, and it wasn’t long before she realized the special power in that. “People actually just gave me money and liked me a lot. Sometimes they would cry. And I just started to notice the way it brought people together in front of me and caused them to relate to me and relate to each other.”

Her mother helped her visually bring these dichotomies to life by painting her album covers. The first depicts two skeletons, a mother and child, “floating in the center of a forest where there’s a black hole behind them and there’s greenery all around.” For the second, she asked for an apocalyptic grocery store with the mother skeleton pushing a cart with the child inside it. Month’s later she would see that same image in real life, walking down an empty grocery aisle at the beginning of the pandemic. 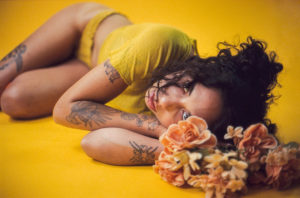 Looking at these paintings, this mother and child seem somewhere between life and death. Their bodies are plump, but their faces are hollowed skulls. “I think of them as me and my mom. And I just want them to age with the albums,” she says of the two figures. “Growing and embracing each other in death. I mean, aren’t we all?”

Maybe it’s this immense empathy that Indigo De Souza channels in her songs. Maybe it’s that her music captures the massive emptiness, euphoria, and dissonance between those two aspects of being human. Or, it’s possible that De Souza knows something we don’t and it’s embroidered like a subliminal silver lining in her music. Both pain and love, life and death, technicolor and abysmal blackness coexisting like neighbors sitting on the bus waiting to get off at the same stop. FL