In Conversation: The Bots on Bringing the Past Into the Present on “2 Seater”

Mikaiah Lei discusses the new perspective that influenced his sophomore album that was seven years in the making.
Menu

Mikaiah Lei discusses the new perspective that influenced his sophomore album that was seven years in the making.

Formed as a two-piece by LA-based brothers Mikaiah and Anaiah Lei, The Bots self-released their first full-length when they were just 15 and 12 respectively. A lot has changed since then—seven years on from Pink Palms, which is considered their debut album proper, The Bots have returned with its follow-up, 2 Seater. For this record it’s just Mikaiah—now 28—on his own. These songs were actually written when he was between the ages of 19 and 22. To that extent, it straddles time, bringing the past into the present through its catchy and nuanced, layered and delicate songs.

For while these melodies—produced by Black Pumas’ Adrian Quesada—are warm and fuzzy, they look back on the emotions of a younger version of himself, one struggling with heartbreak and riddled with regret, but with the added perspective and distance of being older and more removed from the immediacy of those emotions. The result is a stunning record that mixes up genres—there are definitely elements of Mikaiah’s more electronic solo project, Eskimo Kisses, present in some of these songs—and one that reintroduces The Bots to the world. More than anything, as is evident from talking to Lei, these songs are an unrestrained celebration of creativity, of his passion for making music, and of once again doing what he clearly and truly loves.

It’s been seven years since Pink Palms, so let’s get the obvious question out of the way—what have you been up to?
This album has been a long time coming! I actually wanted to release a lot of this music directly after Pink Palms, but because of minor setbacks becoming more than what minor setbacks should be, that didn’t happen. I was going through relationship changes and family things—it was just an amalgamation of pressure and conflict getting me to a point where we took a longer hiatus than I had intended. But then that hiatus bred something different. It was from that that my brother became busy with his side music and decided that that’s what he wanted to do. So I took the full lead of the band. I’m just trying to work with what I’ve got and rebuild, get the stuff that I had on the shelf off of it and restock!

“Looking back at it now with a new perspective, I feel like it’s somewhat therapeutic—I’m able to feel and understand the songs in a different way to what I thought they meant at the time that I was writing them.”

Was it strange looking back at this previous version of yourself?
It was a little bit. I was in a deeper, more passionate state of mind and what I was writing was using all those emotions and intensity that I was feeling. Looking back at it now with a new perspective, I feel like it’s somewhat therapeutic—I’m able to feel and understand the songs in a different way to what I thought they meant at the time that I was writing them. As I listen to these songs, they still mean what they did, but then they also lend themselves to so much more with life experience.

Did making this record trigger those old memories and emotions when you were recording it?
Yeah, because you’ve got to put a little bit of yourself into your music. I was having to sing these lyrics with that intensity to lead into what I was saying, so I was feeling it in the moment. But that’s part of the therapy, I suppose. I wanted these songs to sound great, and I wanted to translate the emotion that I was feeling when I wrote them. So I had to tap into a bit of that, but I was also able to look at everything as a positive. Most people have to do that, I think, to get over stuff. We all go through big things, sad things, traumatizing and negative experiences, but it’s all about how we manage to continue—especially when you write and sing about it. I was well aware of that, knowing that that was a part of my past but that it was going to be my future as well. It’s something I’m going to have to continuously do, and I understand that’s what it is. But that’s what the theme of the album is—understanding and coming to realize that I don’t know anything. I think that’s how life is. You think you know a bunch of things and you think you feel a certain way, but that changes all of a sudden. 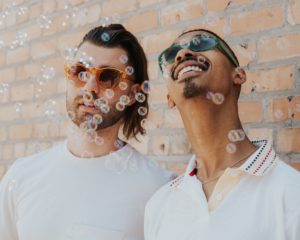 These were written when your brother was still in the band, so did he have a hand in writing them?
No. Even before he left, I wrote the songs. But in all honesty, that was the problem with this new music. He didn’t want to play drums on the songs because he didn’t like them, and that’s what led to the band not making music for a minute. I was making a lot on my own and just holding on to it. I’ve got a lot more that I’ve been working on since this record and that’s got a new sound, although I still think it sounds like me. I’ve been working hard to have a key consistent sound throughout the band’s catalogue while still moving forward. But it’s always been me, so it’ll always kind of sound like that.

“You can make an airplane sound musical, or program your vacuum cleaner to play from a keyboard. There’s a science to making catchy music with unconventional sounds, and I definitely want to do more of that with my music.”

It does sound like elements of what you do as Eskimo Kisses have seeped into this a bit.
I definitely think so. I’ve intended to introduce that side of the music, so when I do branch out more and do more things outside of the immediate rock vibes people expect, it’s not so much of a surprise. I just love sound, and I love the possibility of music with sound. I love that you don’t just have to play guitars or string instruments that you commonly hear in rock music. You can make an airplane sound musical, or program your vacuum cleaner to play from a keyboard. There’s a science to making catchy music with unconventional sounds, and I definitely want to do more of that with my music.

You started doing this at such a young age. It sounds, from these songs, like you have a much deeper understanding of music now.
I’m always a student of pop music, I’m always listening to what bands are doing and trying to understand what producers do to make records sound the way they do. But that’s kind of like chasing the dragon, because you’re never going to work it out. That’s why I want to keep making music, because with each record you learn something new that you can take into the next one. There’s also a lot of beauty in being a child and experimenting with sound, and there are a lot of songs I look back at that I don’t know if I could make now, because I think differently to what I was thinking when I made that music, because of an absence of knowledge or adventurism. I’ve both learned a lot from not knowing a lot, and I’ve learned a lot from paying attention.

Do you feel more prepared to be in the public spotlight now than at the age you were when you first started The Bots?
I’m more ready than I ever have been because of my early preparation and learning the ropes in a way. But I don’t know how people do it. I don’t know how people come out normal. I don’t even think I’m the same anymore. There’s nothing you can’t do if you get to a certain level. I’m not saying that I made it to “big” band status, but I was very lucky to play a lot of bigger festivals like Glastonbury—but when you’re at that level nobody really says no to you. Especially being  a young man of 18, 21 at that time, and you’re getting to go overseas and drink. It’s not great for a young man. It can inflate your ego to dangerous proportions. But it helped me become confident in myself. Hopefully I didn’t take it to the point where I’m arrogant or in-your-face about it. But it’s dangerous.

At the same time, to be able to tour and have people cheer you on is a cool thing. I loved it, but the hiatus was well-needed. I took that time away from it to reconnect with myself, to work on my self-growth and development, and to reconnect with my friends and remember that I’m still just a normal dude that went to school with these people and they don’t care. They know that I play in a band and they’re proud of me, but they help keep it all in perspective. It’s so easy to get caught up in that, so thank goodness that wasn’t my vibe. I drank and partied a little bit and I liked watching all my favorite bands side stage. I met a lot of cool people that I made great friendships with, but there was never anything nefarious. That old saying of “sex, drugs, and rock ’n’ roll” is a real thing, and a young man with the wrong mindset can definitely get lost in it. I just wanted to rock out. I still want to just play music and have a good time and meet other like-minded musicians. I want to be able to collaborate. That’s my favorite part, and the part I miss the most. FL