In Conversation: Thrice on Pushing Boundaries with “Horizons/East”

Dustin Kensrue discusses stepping outside of his comfort zone on the post-hardcore group’s 11th studio album.

It’s easy to take Thrice for granted. For over two decades, the California-based post-hardcore band have been making cerebral music that continues to push the sonic envelope and redefine the band’s musical identity (looking back, it’s somewhat prescient that their 2000 debut was titled Identity Crisis). Aside from a brief hiatus from 2012 to 2015, Thrice have consistently continued to perfect their craft and, alongside acts like Thursday and Taking Back Sunday, they’ve  outlasted many of their peers who achieved mainstream success in the early 2000s. Maybe most impressively, the band—guitarist/vocalist Dustin Kensrue, guitarist Teppei Teranishi, bassist Eddie Breckenridge, and drummer Riley Breckenridge—have accomplished all of this with the same lineup they’ve had since the members were in high school.

Thrice’s eleventh full-length Horizons/East is a testament to the band’s lifelong musical connection, and features some of their most innovative and captivating performances to date. From the avant-jazz elements of “Northern Lights” to hypnotic, guitar-driven passion evident on “The Dreamer,” Horizons/East is what we’ve come to expect from Thrice in the sense that it’s a welcome surprise when viewed in the context of their catalog. We caught up with Kensrue to discuss Thrice’s evolution of self-recording and -producing the band’s albums, the “challenges” they created in order to get outside of their comfort zone on the new LP, and the companion record they have in store for the near future.

Over the years you’ve self-produced albums at your home studio, sometimes with a little help from outside producers or engineers. What was the process of making Horizons/East like?

We recorded all of it ourselves and then had someone else mix it, which was great and helpful. We’re stoked that we found someone [Kowloon Walled City’s Scott Evans] who had a very similar vision, so it wasn’t a big game-changing thing. It was confirming all of the things that we’d been trying to get in there.

“Whatever the four of us are doing is what Thrice is. That’s part of the difficulty of trying to nail down where you’re going—there’s not a lot of rails.”

Does that feel liberating or daunting, doing things on your own?

The first time you have a producer making suggestions you’re like, “Woah, this is our thing, man, hold on.” You learn how to let go a little bit, so we always learn a lot from working with people, and then we get excited to go back and try stuff on our own. I don’t have any fear of us not getting the tones right at this point, just because I know that Teppei can do that, and also we’re generally leaning toward getting a more natural sound and we have a big enough drum room now. We did The Alchemy Index in a tiny, tiny room, so if that sounded good, this album will sound better.

It’s always a little bit daunting to not have that other person in the process to bounce things off—especially with such a democratic band, because the four of us are always bringing a lot of ideas, and sometimes it’s helpful to have a fifth person to help guide that a little bit. But we’re never at a loss for ideas, so it’s more about how to figure out which ideas to pursue. In the end, we really like a lot of the aspects of recording ourselves. The first time I ever felt comfortable singing [in the studio] was on Alchemy Index, just because I was working with Teppei, who’s my friend. I’d always felt rushed doing vocals; it’s a scary, weird thing—your voice is getting singled out and put into another room. There’s less pressure when someone’s not looking over your shoulder. You’re not taking up someone’s time, you’re not in a studio where you’re paying a bunch of money every time you sit down. It’s more streamlined and free-feeling, and having recorded together for a long time, we have a similar approach to getting a good take. 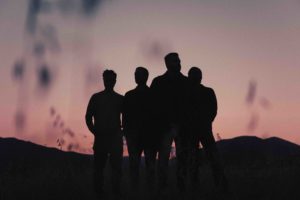 I’ve been thinking about how unique Thrice’s trajectory has been—if you listen to The Illusion of Safety next to Horizons/East, obviously those are very different records. When you’re writing, are you ever like, “That’s a cool part, but it doesn’t sound like Thrice”?

Whatever the four of us are doing is what Thrice is. That’s part of the difficulty of trying to nail down where you’re going—there’s not a lot of rails. It’s interesting because Alchemy Index kind of opened that further for us. We expanded the palette, and then Beggars was easy because it was kind of a reaction to how involved and expensive Alchemy Index was, so it was more stripped-down. But after that, it goes back to just being pretty open. We liked the fact that as expansive as Alchemy Index was, each record had these very defined boundaries that we were pushing off, which was very helpful for creativity.

For this record, we ended up doing what we called “challenges.” One of the challenges was to write a riff that was based on the Fibonacci sequence, so Teppei took the numbers and put the notes into the scale based on that, and then just took a couple of notes out to add some movement to it—and that’s the guitar riff that’s kind of wild-sounding in the beginning of “Northern Lights.” Another challenge was using quartal chords, which are popular in certain kinds of jazz music. They’re a bit less harmonically defined, so they can float over things in a way that chords built on thirds can’t really do.

“We have hope for people to change because the alternative is just some Armageddon battle. If you see the other person as your mortal enemy who must be destroyed, wouldn’t you rather invite them into a better way of being and now have a friend?”

I wanted to ask about the song “Robot Soft Exorcism.” I got kind of deep into the David Dark theory after seeing you post about it, and I was curious what inspired that song.

That song is based on this idea by David Dark, who wrote the bio for the record and is just a really fun follow on Twitter if you like watching someone poke at a hornet’s nest very calmly and kindly. He talks about this idea of imagining people in these mechanical suits that can represent their political group or social group or company that they work for. It’s getting at this idea that you aren’t just the person, you’re embedded in these other things, and those things can give you protection and benefits. Therefore when you realize that the thing that you’re embedded in is also causing harm, it becomes complicated because you don’t want to give up the benefits of whatever that thing gives you.

David wants to get at this idea that you can invite someone out of their robot, so that’s the “soft exorcism.” It’s inviting someone into a new way of seeing and being that leaves behind the harm that’s being done by the suit, by that institution. I really liked that idea because as divided as we are right now as a society, I think it’s important that we try to engage in these robot soft exorcisms. We have hope for people to change because the alternative is just some Armageddon battle. If you see the other person as your mortal enemy who must be destroyed, wouldn’t you rather invite them into a better way of being and now have a friend?

I think the key here is understanding that for all of us, if we’re growing, we’re changing. We’re realizing we thought things before that we don’t agree with now. Some of those things we’re ashamed of, but that’s OK, that’s how you grow. So if you see the potential for changing your own life, you can see the potential for change in other people even if it feels like it’s far away. That’s kind of a larger theme of this record, this inviting into something larger, but it’s very defined on that song. I knew I wanted to write about that concept and I was trying to figure out where it would fit. At the time I realized, “Oh man, the demo I had for what became the song has this kind of weird robotic feel to it, I should just dig in there and try to align the two.”

You’ve done a lot of thematic albums such as The Alchemy Index throughout your career. Do you see Horizons/East as part of a larger conceptual series?

There will be a Horizons/West—part of it is already recorded. They’ll be essentially companion records; I don’t know when that one will be out, but definitely shorter than a normal record cycle. We’re really excited about that and there will be a lot of tie-ins and similarities to some of the big-picture stuff. This one is much more dawn-oriented, so there’s elements of that throughout the record, and the next one will be a bit more toward the sunsets, looking-toward-the-West kind of ideas. FL