We Were Promised Jetpacks, “Enjoy the View”

The group’s 5th LP tones down the dark, nervous energy that was previously at the core of their identity.
Menu

Reviews
We Were Promised Jetpacks, “Enjoy the View”

The group’s 5th LP tones down the dark, nervous energy that was previously at the core of their identity. 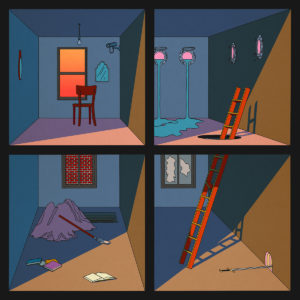 It’s no secret that the best British bands are all Scottish—that’s been fact for a long time. With frontman Adam Thompson now residing in Brooklyn, We Were Promised Jetpacks may not be entirely based in Scotland anymore, but the trio—completed by bassist Sean Smith and drummer Darren Lackie, following the departure of founding guitarist Michael Palmer in 2019—still count as a Scottish band. As such, this fifth full-length doesn’t disappoint.

It started life in early 2020, before global events we all know about brought the world to a halt. That collective pause necessitated a different way for Jetpacks to write. They had more time to do so, and did so more collaboratively, sending files between them, exchanging ideas through invisible wires with less of a deadline than they otherwise would have had. The result is a decidedly more relaxed and laid back record than they’ve ever made before, one that doesn’t quite redefine who Jetpacks are, but which certainly tones down the dark, nervous energy that was previously at the core of their identity.

Now, instead of insistent, urgent guitar lines, there’s more space between the notes, more room for songs to swell, more time for these songs to settle. That’s clear from the start, with the chilled-out, almost a cappella lilt of opener “Not Me Anymore,” which waltzes gracefully, soothingly, sadly. It’s followed by “Fat Chance,” which is perhaps the song most like the Jetpacks of old, but which is missing the tense bite that dominated their songs in the past.

That’s present more in the sublime “All That Glittered” and the fraught, frazzled “Nothing Ever Changes,” but just because it’s largely absent on these 10 songs doesn’t mean these songs aren’t up to scratch. Just listen to the way the final track “Just Don’t Think About It” swells magnanimously, vocals and instruments layering hypnotically as it reaches for a muted, beautiful, Sigur Rós–like crescendo. It doesn’t come crashing down in the same way that band might, or how We Were Promised Jetpacks might have done before, but its tender, delicate poise is still stunning and heartbreaking in equal measure.