Nick Allbrook talks us through how changing urban landscapes in Australia shaped the group’s latest LP.

Pond, the four-piece psychedelic rock band from Perth, Australia, seem to enjoy political confrontation. This is most evident on their latest album 9, where they undermine any redeeming qualities capitalism may have by showing how progress and consumption in a capitalistic society inevitably mean destruction. By using a barcode-like image as their album cover, they even indict themselves and the listener as active participants in this capitalistic death drive.

Although Pond’s last two records Tasmania and The Weather explore political themes like colonialism and wealth, 9 goes further with these concepts and incorporates them into its production and marketing. Over Zoom, frontman Nick Allbrook explains that they wanted to strip “the whimsy of a typical album” in the way a Brecht play shows the audience the backdrop and stagehands behind a stage to show the facade of it all. “I think it fits in with a pseudo-industrial new-waviness of what we were kind of imagining the album to be,” he says. “It didn’t quite turn to Metal Machine Music as we thought when we first started. But that was our intention. That’s why the cover looks like a barcode.”

Aiming to create their version of that Lou Reed record, they choose not to call on Kevin Parker to produce—a first in 10 years for the group, which is made up of former touring members and collaborators of Tame Impala. Instead, multi-instrumentalist Jay Watson and drummer James Ireland took over producing and mixing duties, dropping Parker’s saccharine psych-rock touch and replacing it with rhythmic, electronic post-punk. Allbrook also played a crucial role in navigating Pond into this new sonic territory—with all the isolation in the world afforded by COVID-19, Allbrook tapped into what he describes as “violent music.” He unconsciously gravitated toward experimental post-punk by the likes of Public Image Ltd, Suicide, The Contortions, and anything else that contained a marriage of melodies with abrasive production, obscene lyrics, and repetition. It was an influence that inevitably took root in 9.

“I think it fits in with a pseudo-industrial new-waviness of what we were kind of imagining the album to be. It didn’t quite turn to Metal Machine Music as we thought when we first started.”

A perfect representation of Allbrook’s untethered energy and post-punk influence can be found in “Pink Lunettes,” a song constructed of tape loops, yelling, and abstract lyrics. Bandmate Watson was the one who came up with the initial concept, a loop consisting of jarring electronic bursts. To Allbrook it sounded like some sort of drug-addled madness, inspiring him to read random lyrics from his notebook. “There are a few lines from Leonard Cohen’s book The Favorite Game in there. I just yelled in a take, I think most of it is what we used in the end. I wanted it to have a manic energy. The instrumental just called for it. The instrumental is speedy and amphetamine-sounding. And that called for a speedy, abstract vocal thing.”

Perth and Fremantle—cities where many in the band grew up—are the backdrop to several of 9’s songs as well. Allbrook eagerly mines material from these cities, looking at how these places have changed, and how capitalism has erased their past and keeps certain groups, particularly the Indigenous people who live in these cities, in the margins. According to the Australian Institute of Health and Welfare, an estimated 37 percent of Indigenous Australians aged 15 and over had adjusted weekly household incomes in the bottom 20 percent, and only 9 percent of Indigenous Australians were in the top percentile of earners. The wealth gap in Australia is shocking as it pertains to the Indigenous population. 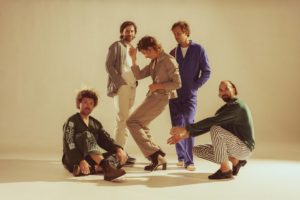 It’s this obscene inequality that Allbrook indirectly explores on the single “Toast,” a song lampooning the obliviousness of the wealthy as they drink champagne while the world burns around them. The imagery in the song is Lynchian as Allbrook juxtaposes scenes of toasting with images of the end of the world. It was partly inspired by the real city of Broome, Australia, which heavily invests in tourism while leaving poor Indigenous locals behind.

“You go for a camel ride, fucking go to Matso’s Brewery, and have a glass of champagne and watch the stairway to heaven. But the rest of the town really suffers from poverty, drug abuse, diabetes, and all the other things that have been brought to the Indigenous culture by European invasion.”

“There are beautiful beaches in Broome, and lots of white tourists go there. And one of the things it says on the tourist pamphlets that you ‘simply must do’ is go to Cable Beach and sit at this particular restaurant and watch the sunset with a glass of champagne,” says Allbrook emphatically. “You go for a camel ride, fucking go to Matso’s Brewery, and have a glass of champagne and watch the stairway to heaven. But the rest of the town really suffers. It really suffers from poverty, drug abuse, diabetes, and all the other things that have been brought to the Indigenous culture by European invasion.”

Pond’s sharp critique comes to its zenith on another single, “America’s Cup.” The title refers to a huge boating race in 1983 that changed the economic and cultural landscape of Fremantle. Before a big influx of cash was injected into the city, it was a fishing town made up of Italian, Chinese, and Southeast Asian immigrants. The flashiest things to be found there at the time were quaint Italian cafes that would serve espresso on terraces, offering white upper-class Australians the fantasy of feeling European.

“It’s fucking crazy to think this squillion-dollar boat race shifted the trajectory of this little port town,” says Allbrook of the changes that took place. “And when you walk around there and you see these ghosts of that time before, when Fremantle was a gritty port town with a couple of artists and smackheads doing their thing surrounded by sailors and Italian fisherman. What a ridiculous story history and reality writes. Their whole wonderland was shifted by this bazillion-dollar boat race and by a bogan playboy named Alan Bond.” Akin to wealth invading neighborhoods in major U.S. cities, like Brooklyn or Echo Park, similar gentrification happened to Fremantle. But instead of renovated public housing and remodeled dive bars, Fremantle was left with old Italian espresso bars and fisheries, places where the wealthy go to engorge themselves on fresh oysters and pound gourmet espresso while the working class looks on from the sidelines.

“If you’re having a shit time, your girlfriend has broken up with you, you’ve vomited in your hat, lost your shoes, missed your taxi, and you go for a swim and it’s full of shit, you can only really take the piss and laugh.”

Although 9 can be very cynical, Pond tries to balance that with comedy, injecting ridiculous one-liners into their songs to the point of parody. Allbrook says he does this to challenge the listener because he believes art can be both serious and comedic. It can even be an impetus for some sort of radical acceptance, similar to how Zen Buddhists tell paradoxical koans to help people achieve enlightenment. “If you’re having a shit time, your girlfriend has broken up with you, you’ve vomited in your hat, lost your shoes, missed your taxi, and you go for a swim and it’s full of shit, you can only really take the piss and laugh. I mean it doesn’t stop from being horrible. I guess it’s part of saying things out loud and accepting that they exist,” says Allbrook.

Is this a good way to get people to confront the systemic problems caused by capitalism? Maybe. Joni Mitchell did sing that laughing and crying is the same release. And there’s something positive in being able to articulate deep frustrations by making them into jokes. It brings topics to a level where they’re safe to be explored, where questions can be asked, and where they can be rearranged into something new. Still, a shift in perspective alone won’t change our material situation. Something material needs to change. FL