In Conversation: Bill Nelson on the Influence and Legacy of Be-Bop Deluxe

We spoke to the English songwriter on the occasion of his former glam/prog collective’s massive new “Live! In the Air Age” box set.
Menu

We spoke to the English songwriter on the occasion of his former glam/prog collective’s massive new “Live! In the Air Age” box set.

For an artist registered and branded as one of guitar heroism’s most innovative players, Bill Nelson is not one to be stuck in the past or focused on the present. Always inventing, always evolving, and always looking to the next thing (and the thing after that) the Yorkshire, U.K.-based guitarist and songwriter made himself and his legendary first ensemble Be-Bop Deluxe into an anomaly from their first record. With 1974’s glam-era debut Axe Victim, BBD added a progressive complexity and a daring density to the glittery genre, a dynamic previously unheard within Britpop’s most pomp and circumstantial sound. Nelson’s razor-sharp and soaring eletro-induced solos were a large part of that experimental esprit. Then and now, Nelson’s guitar scrawl sounds like no other. Increasingly catchy and chancy as time went on, 1976’s opulent Sunburst Finish and 1978’s Drastic Plastic are very much at one with their titles.

For all of its studio wizardry (produced by Nelson with John Leckie, eventually known for his work with Magazine and PiL), 1977’s Live! In the Air Age is Be-Bop Deluxe’s art-rock masterpiece: an elegant, sprawling mix of then-new, previously unrecorded and past work splayed across the dirtball nihilism of Brit-punk’s origin story. Recorded live on BBD’s 1977 tour just months before its release, Live! is fiery and hot wired for freshness. After they pressed their audacious 1977 concert LP, BBD stuck around for one more album (the aforementioned Drastic Plastic) before disappearing with Nelson moving forward and focusing on Cocteau-inspired solo work, another band (Red Noise), collaborations with fellow travelers in experimental electronic music (Yellow Magic Orchestra, David Sylvian, Roger Eno, Cabaret Voltaire), and an ongoing series of homemade ambient albums, previously unreleased epics, and other sonic explorations—all hung on a moon of fierce independence as an artist and as a releasing agent.

Nelson never looked back, until 2018’s four-album exploration of Sunburst Finish. That recently opened the door, thankfully, to a similarly sized four-LP Axe Victim, and now a whopping 15-CD/one DVD expansion of Live! In the Air Age to include every gig on that 1977 tour, along with freshly remixed and vividly remastered sound. Though an active blogging presence, Nelson doesn’t do many interviews, so our rare opportunity to speak with him is particularly choice.

What can you tell me about your newest music’s deepest inspirations—what unites it, and why is it that it’s so limited in availability?

I find I‘m dealing with themes of age and mortality, memory and reflection. I guess it’s because of this particular period of my life I’m having to deal with. It would be ridiculous for a man of my age to write lyrics and music from the point of view of someone in their twenties. That would be a sham. I have no choice but to reflect on my present situation and concerns. Having written so many songs over the years, I need to push the boundaries and keep my creative juices flowing. Thankfully I’ve never come up against writer’s block—I can usually find a starting point, whether it’s lyrics or music. I like nothing better than having a blank canvas in front of me, waiting to become a picture in sound.

“I like nothing better than having a blank canvas in front of me, waiting to become a picture in sound.”

What led you to digging through the crates for these Be-Bop Deluxe reissues, finding all of the extras for Live! and Axe Victim?

The truth is I didn’t go digging at all. The idea to re-release them in that form came entirely from Cherry Red and Esoteric Recordings who own the Be-Bop Deluxe back catalogue. Mark Powell of Esoteric did all the research and unearthed the extra tracks. I just contributed a written essay for each release and sometimes supplied a photograph or two from my archives. I wouldn’t have had the time to search out lost tapes and so on. And, to be perfectly honest, I would have probably had little interest in doing so. But Esoteric have excelled themselves—the packaging and presentation are first class. They’ve done a fine job and I’m very happy with the result.

Has your past music become any less daunting of a topic for you?

Not really daunting, just a little frustrating at times. I dislike being stereotyped, and because of Be-Bop Deluxe’s commercial success people tend to associate me with that era and that band. But Be-Bop Deluxe represents only a tiny fraction of my creative life. My career as a musician didn’t stop with the band’s demise, it went on at an even more intense pace, uninterrupted to this day. I’m making the music I feel I have to make without any commercial restraints. 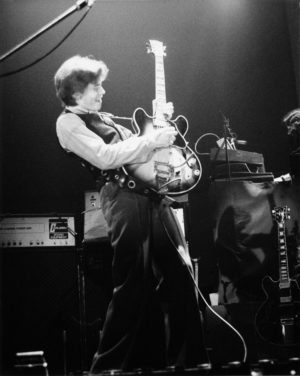 Glam, prog rock, and art rock all had their own scenes at your start. Were you aware of all of them, or were you and the rest of the band more concerned with getting down to the business of music?

When Be-Bop Deluxe started, we had no ambitions about becoming a professional band. We were all holding down day jobs and the band was a kind of hobby, a release from ordinary life. The glam image was a bit of fun, partly stemming from my art student background and partly an attempt to freak out the rather conservative working men’s club audiences we were playing to in Yorkshire back then. But, as luck had it, we eventually got signed to EMI’s Harvest Records and the first album wrapped up the band’s music at that point, along with the glam image. It was hilarious in a way—you only had to look at the band to see that under the makeup, we were anything but glamorous! But I moved away from all that as soon as possible. I think the music the later band made was unclassifiable. It was a genre unto itself.

“Be-Bop Deluxe represents only a tiny fraction of my creative life. My career as a musician didn’t stop with the band’s demise, it went on at an even more intense pace. I’m making the music I feel I have to make without any commercial restraints.”

How did “Darkness” change your game as a songwriter?

“Darkness” is really the odd one out on Axe Victim. I wrote it on piano rather than guitar and it lent itself to an orchestral and choral arrangement. Lyrically it was inspired by the decadent poets and symbolist painters I had been interested in for some years. It freed me from the rock straightjacket to a degree, and laid foundations for some of the music I’ve made in more recent years on solo albums such as The Alchemical Adventures of Sailor Bill.

The August 1977 shows in the Live! collection were recorded in the U.K. at the very height of punk. What were—and are—Be-Bop Deluxe within that moment? In some ways you guys predicated all that, and in some ways you were its antithesis.

Punk was another one of those moments in pop that came along and then faded. I never felt threatened by it and welcomed its rebelliousness, but it never felt truly radical or revolutionary to me. It was just rock ’n’ roll with snarlier vocals. But it seems that Be-Bop Deluxe was respected by a lot of the punk bands—Steve Jones of the Pistols and Adam Ant, amongst others, were fans. 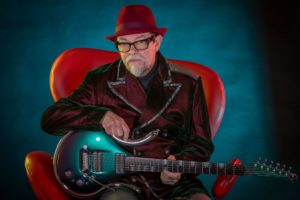 What does the guitar and all of its possibilities and limitations mean to you now that it didn’t then—and vice versa?

The guitar has always been at the center of my musical expression, even though I’ve explored keyboard textures, electronics, and sampling. It will always remain so. I fell in love with the instrument around 10 years old and it still fires my imagination to this day. It’s basically wedded to my soul.

“The guitar has always been at the center of my musical expression, even though I’ve explored keyboard textures, electronics, and sampling. It’s basically wedded to my soul.”

Considering all the old work you’re re-issuing and all the new work you’re releasing, who and what is Bill Nelson in 2021-2022, and what should we expect next?

Who am I? Well, I guess that’s what I’m trying to find out via the music I make. It’s a personal exploration, a form of therapy and a meditation. I can’t tell an audience what to expect from me because I can’t tell that to myself. I have no idea what’s coming next until it arrives. And once it has arrived, I don’t know what it means until quite some time after. It’s as mysterious a process to me as it is to anyone else. And maybe that’s as it should be. But at the moment, I’m preparing a six-CD set of new music to release titled My Private Cosmos, plus a single-CD album titled Mixed Up Kid, a kind of prequel to the former album. I’m hoping to release them around November or December.

What is your opinion of Be-Bop Deluxe now?

I’m proud of it, of course. It’s a very long time ago, and there’s been so much musical water under my bridge since then. I don’t hanker after that period, although I look back on it with fondness. But I’m more interested in the here and now. The past is a foreign country and I’m happy to let it take care of itself. FL