Back in the day, Jonah and Vanessa Bayer were into some strange stuff. 2D cartoons and microwavable treats have become a bit archaic and unsavory in light of today’s standards, but for the Bayers, those were the childhood moments that molded them, made them laugh at the sad and ugly parts of life, and left them with the twisted sense of humor penetrating their respective work. They’re now sharing their collective memories on their new podcast series How Did We Get Weird?—from Will Ferrell and iHeartMedia’s Big Money Players network—along with weekly guests from the realms of comedy, film, TV, and music.

Throughout the series, the Bayers recount old-school AND1 mixtapes, daily school bus hijinks, watching Double Dare Live!, salivating over now-defunct fast food menu items, holding an affinity for Lean Pockets, a deeper nostalgia for Saturday morning cartoons, the mastery of  the Masters of the Universe world, and even break down the 2001 Jack Black and Gwyneth Paltrow rom-com Shallow Hal. Guests have included  the likes of Australian actress Claudia O’Doherty—who recalls the time she saw actress Naomi Watts turn down a date with Tom Cruise—actor Langston Kerman of HBO series Insecure, and former SNL cast mates Beck Bennett and Bobby Moynihan, with a new batch of artists and comedians scheduled to appear on the podcast later this fall.

“The podcast has been an excuse for Vanessa and I to reminisce about our childhood and growing up together, which is something we do a lot anyway,” says Jonah Bayer. “I feel like we are always sending each other Wikipedia links or asking if we remember certain places or pop culture moments, so ‘How Did We Get Weird’ came together very organically.”

For Vanessa—who, in addition to SNL, also starred in the film Trainwreck and was featured on the first season of I Think You Should Leave—and Jonah—a founding member and guitarist for the hardcore punk band United Nations and a regular contributor to FLOOD, who also co-created the Comedy Central video series Sound Advice with his sister in 2013—the opportunity to merge comedy and music into hour-long trips down memory lane (no Wikipedia needed) provides the perfect setup for How Did We Get Weird?

“Between my experience in the music industry and Vanessa’s friends in comedy, we also have a really wide-ranging group of guests,” says Jonah. “[We’re] really excited for people to check out to the podcast.” 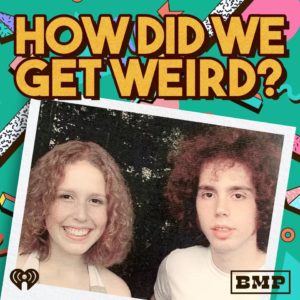