In Conversation: MUNYA Looks to the Night Sky on Her Debut Album “Voyage to Mars”

With a lifetime spent looking up at the stars, Josie Boivin is making music meant for outer space.
Menu

With a lifetime spent looking up at the stars, Josie Boivin is making music meant for outer space.

Ever since she was a child, MUNYA was fascinated by the stars. In her small hometown in Canada, the bedroom pop artist was able to see clearly into the night sky and wonder about all the possibilities stretching out into the vast universe. That fascination has stuck with her throughout her life, and takes center stage on her debut album Voyage to Mars, out on November 5.

Singing in both French and English and utilizing her background in opera, Josie Boivin’s music not only paints wondrous pictures of far-off worlds, but resonates with the urge to explore and understand the planet we currently inhabit. The album also finds MUNYA at her most musically expressive, with catchy melodies that spotlight her vocals serving as the building blocks for funky synths and plenty of spacey vibes.

Ahead of the release of Voyage to Mars, we chatted with MUNYA about space, recording her debut album, and her artistic influences.

When did the vision for this album start to take shape?

A debut album was intimidating for me. I started releasing EPs, that’s how I started my career, so it was kind of a comfort zone for me. And I guess at the beginning, I was like, “Oh, this is probably going to be an EP.” Then I started writing songs, and then the songs are connected because I started writing late 2019, then the pandemic in 2020, so it became like a journey itself. I was home, I couldn’t tour, I was in my bedroom—I guess that’s why we call it “bedroom pop.” But then I reached out to a couple friends like Kainalu, who I love working with. P.O [Rioux], my mixing/mastering guy, we’ve been working together since the beginning of MUNYA. Gabriel [Lambert] also worked on the first EP. So it started I don’t know when exactly, but I’d say that by a couple months after I started writing the songs I knew it was going to be an album.

“Opera is such a different world, and I don’t want to be a professional opera singer—like, never ever—but I think the way it influences my writing is that I treat my vocals as an instrument and it’s definitely part of my process.”

I know growing up you had a lot of experience with opera. How did that background influence this album?

I started singing opera when I was in high school and it was very random. I was playing piano and I heard an opera singer, and just for fun, like to make my friends laugh, I sang like [sings operatically]. Then the opera singer was in the room and I didn’t know it, and he heard me and he said, “Hey, have you ever thought to sing opera? You have a nice voice.” And I was like, “Woah.” Opera is such a different world, and I don’t want to be a professional opera singer—like, never ever—but I think the way it influences my writing is that I treat my vocals as an instrument and it’s definitely part of my process.

Putting aside lyrics, the voice is another instrument in a song.

Yes, exactly. I started music with piano and then the vocals. I feel like this album is the first time that I’m really putting my voice more up front, and that was a conscious and big step for me—like “Cocoa Beach” and “Tonight Tonight” and “Boca Chica,” the vocals are up front. With the EPs I did before, the voice was always mixed with the other instruments. 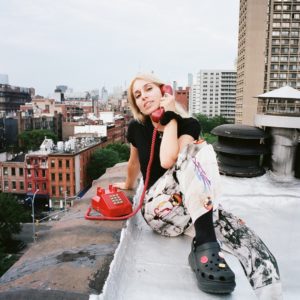 With bedroom pop, getting that mix right is a key part of it. How did you approach balancing all the elements in your songs?

It’s a lot of work. I always start by writing ideas in my bedroom. Then I add so many things—so many layers of drums, so many layers of bass, so many layers of synth. And then it turns into a song, and then I start cleaning it up and I take some layers out. I mean, writing the song itself sometimes can be really quick, but then the process of cleaning up the session… With “Cocoa Beach,” there’s “Cocoa Beach Josie’s Mix.” So that’s my first mix that I liked. And then that’s the mix I will send to my friend P.O. who mixed and mastered the album. And I’ll be like, “OK, this is like the mix I like, so take that and make it sound better” [laughs].

“I feel like this album is just me being in my apartment, in my bedroom, but then taking my inspiration and my imagination and just traveling. That’s why this album is about a journey, because I needed to travel but I couldn’t, so I traveled through creating, almost in a meditative way.”

Obviously the album has a lot of space themes and imagery in it. Where did your fascination with space come from?

I think it comes from, first of all, where I come from—it’s in the middle of nowhere. It’s a small village six hours north of Montreal. I grew up in the woods, and at night it gets really dark. I remember being very scared of the nighttime, but at the same time fascinated. You look up and you can really see those stars, and even sometimes you can see the Northern Lights. And then also I’m the baby of the family—I have my big sister and my big brother—so when I was a kid, I remember them watching Independence Day and being so scared of aliens, and being like, “Oh my god, I’m gonna get abducted here in my hometown” [laughs].

Even now I’m a big fan of sci-fi, I love Star Wars. Imagination is also like, we don’t know, we’re trying to figure it out. All the work and the technology we developed for us to go to space, that’s technology we can use right now for the environment, and for so many things. I believe in humanity and what we can do when we push our limits. I feel like we’re not aware of all the things we can do. I’m just thinking of the future—sometimes I’m like, wow, it’s going so fast. How’s it gonna be in 50 years, which is not that far, or even 10 years?

From the title to many of the subjects of the tracks, this is an album that’s about all kinds of journeys. What was the journey for you making the record?

Like everybody, I was at home. I couldn’t travel, I was restrained in my apartment. I think I had this need to travel and to change the landscape, the scenery, just see something different and I couldn’t do it. I feel like this album is just me being in my apartment, in my bedroom, but then taking my inspiration and my imagination and just traveling. That’s why this album is about a journey, because I needed to travel but I couldn’t, so I traveled through creating, almost in a meditative way.

What other elements in the process of making the album stand out to you?

The artwork. I drew a lot during the pandemic, and this drawing was very liberating for me. I collaborated, so I had just the draft, just this drawing I made, and I sent it to this amazing artist. That was fun, just putting all the artwork together which is connected with the songs. I’m very grateful I did that.

Being so involved in every aspect of your debut must have been really satisfying.

Yeah it definitely is. It’s always been kind of my struggle when I started. Being a music producer as a woman, sometimes it’s tough. I remember starting this project, and I had to put my foot down and just be like, “I will produce my music and I want to do the artwork.” It was the whole process of being confident, and now I’m so happy I do it, because it’s really who I am. FL