In Conversation: La Luz and Adrian Younge on Forging a Supernatural Connection

In Conversation: La Luz and Adrian Younge on Forging a Supernatural Connection

“Can we talk about Lena’s ill bassline, how she came off so ill on the bass, though?”

It’s well-past the scheduled end of our interview to break down La Luz’s self-titled fourth album, and Adrian Younge isn’t done showering the trio with the kind of love you only dream exists between band and producer. Big smiles break out over their faces, and as they dissect the bassline in question—Lena Simon’s supremely funky dance within the bouncing rhythms of “Watching Cartoons”—it’s clear that the admiration is mutual. Built up over a multi-stage recording process that found the veteran producer taking his first leap into working with an established band, and the LA-based psychedelic rockers eager to break with the surf rock genre tag that’s dogged them for nearly a decade, La Luz is the sound of four minds giving each other permission to defy their own expectations.

Trimming down to a trio, La Luz began work on their fourth album at a distance due to COVID, swapping files before reuniting in LA to finish writing in a more improvisational atmosphere. But there’s no distinguishing between these two phases on La Luz—no clear sonic divide between the desert prog of “Yuba Rot,” whose screeching guitars circle like vultures beneath a clear blue sky, and the hushed romantic shuffle of “Down the Street,” where the gentle pulse of Shana Cleveland’s guitar gives way to a squelching synthesizer solo and glimmers of sitar. “I don’t feel like there’s a big difference between what we wrote remotely and the songs we wrote together,” Cleveland explains. “I feel like we’ve been a band for so long at this point that we can kind of be far away and still mentally together. We channel that ESP and make it work.”

Channeling that supernatural connection was made even easier by teaming up with Younge, a master collaborator whose reverential, quasi-mystical approach to recording—“capturing human air,” to hear him tell it—pushed the band to new levels of experimentation, but not before he fell in love with what he was already hearing. “I just really loved the creed behind their sound,” he says. “There’s this passion to always push the boundaries, but not in a way where they’re copying other people. They’re just really naturally being themselves.”

At every turn on the new album, from the spaced-out vibraphones of “In the Country” to the walls-are-breathing drums of “Spider House,” Younge’s production amplifies La Luz’s innate will to break free and transform. La Luz is a psychonaut’s dream, a wild adventure in sound without limitations or boundaries. As you’re exiting your body to the spectral guitar solo of “Oh Blue” (one of Cleveland’s most thrilling and soulful to date) or gliding the crystalline harmonies of “Lazy Eyes and Dune,” the only thing you’ll have time to wonder is how you ever reduced this band to “surf rock” in the first place. 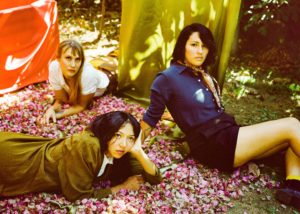 Is there a song where you feel that the collaboration truly transformed your sound?

Shana Cleveland: Probably “Watching Cartoons.” We were playing that song at practice when Adrian was just like, “Oh, this is cool, but let’s change this section and just rearrange the chords here.” We tried it and thought, “That wasn’t what we had in mind, but let’s keep it.” Now I don’t even remember what the demo sounds like.

Lena Simon: It’s a very different song than what someone might think of when they think of La Luz. Adding that element of some funk in there has changed it entirely from what, in my mind, was more of a ’70s folk tune. It really fused two or three worlds together, and created an almost genreless song. “Lazy Eyes and Dune,” too. It didn’t change very much compositionally, but the tempo went way down. That decision goes hand-in-hand with a lot of other advice that Adrian was giving us. It was like, “Whatever you’re trying to achieve, do not shy away from it, just go 100 percent.” So we thought, “Alright, let’s just make this molasses-y and beautiful, let’s go otherworldly with it.”

“It was exciting to think about going into the studio and having there be a collaboration with the producer. It felt like, ‘OK, we’ve got this new band member who’s coming from a totally different place, who’s going to hopefully bring us to a different place.’” — Alice Sandahl

At what point in the process did you come into the mix, Adrian?

Adrian Younge: The first time I met them in person was when they were rehearsing the material, so I was basically just sitting there and listening to what they were doing. Months before this, they had reached out to see if I would produce them, and I’ve never produced a complete band, because I’m very insular with who I record with. But in watching them, listening, I wanted to see what I could do to help them be even better. The only thing I could really do was just push them to go past their comfort zone—and they’re already outside of their comfort zone! But it’s giving them the confidence to be the best version of themselves.

Alice Sandahl: I was a fan of his work, and I think what was most exciting about the idea of working with him was that he had his own sound. It was exciting to think about going into the studio and having there be a collaboration with the producer, because that’s not usually how we work. This time it felt like, “OK, we’ve got this new band member for a minute who’s coming from a totally different place, who’s going to hopefully bring us to a different place.”

Listening to the first song, “In The Country,” there’s more going on production-wise than in almost any previous La Luz song. How do you find those moments as a producer where you know, “This needs a vibraphone”?

Adrian: When I listen to a song, I try to figure out where the pockets are. “Are we going to shine more light on the chorus, and then pull some of the light back on the next verse to open even more sunlight to the end, to close it out neatly? Or is it going to be crazy bananas from the top, and then be subdued at the end?” I understand these things, but then doing it is the chemistry. All this is a formula, because listening to music should be a roller coaster ride where you’re taking the listener through ups and downs. You’re carefully curating these ups and down as if they’re riddles that you want the listener to discover. Because when the listener deciphers the riddles, it’s as if you made it personally for them.

“Listening to music should be a roller coaster ride where you’re taking the listener through ups and downs. You’re carefully curating these ups and down as if they’re riddles that you want the listener to discover.” — Adrian Younge

Within that spectrum of sound, La Luz has a huge low end—what was it like having your basslines front-and-center, Lena?

Lena: Refreshing. We were listening to some of our older stuff and I guess that did get kind of buried somehow. Adrian is an insane musician and bass player himself. So the day before we went in to actually make the record, I had a bass lesson with him and applied it the entire session. And even right before I went to a take, I’d be like, “OK, this is what I was doing, but something about it just isn’t right. Let me take this suggestion and try and work it in.” And I feel like somehow, spur of the moment, it would just translate. There are honestly some really weird, cool mistakes that we ended up keeping and highlighting too.

Lana, I also wanted to ask about the music video for “In the Country,” which you actually directed yourself. How did you come up with the concept for it?

Lena: In talking about the record, we’d come up with this theme of looking a little more closely at nature. And being in lockdown, everyone has been forced to be outside a little bit more, to slow down and look closer at these things. The idea was to directly translate that description, to be like: “OK, we’re literally going to be picking these peppercorns off this tree and smelling it and showing it to the camera.” 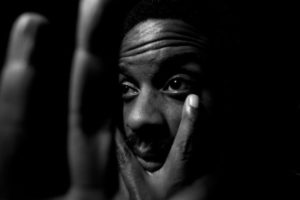 Nature crops up all over the album, and I know Shana moved out from the city to Northern California. How have your relationships with nature and the outdoors evolved over the last year?

Shana: To me, living out in the country for the first time in my adult life has been eye-opening. There’s this Instagram account called Nature Is Metal that someone told me about. I think about that all the time. It’s so raw out here. It’s just vultures circling all the time, little insects eating other insects. If you just say “nature,” you might think of something super soft and soothing and quiet. Being out here, I guess I’ve just noticed how intense it is. Humans are the ones that sort of soften things and make it nicer. But the essence of nature is just kill or be killed.

Alice: With the fire season, it’s sort of in-your-face how wild it is out here. When you’re stuck inside and your only escape is to go to a park, when the fires hit, now you’re really stuck inside. But I need it, living in the city. I love Los Angeles, but you need an escape.

“If you just say ‘nature,’ you might think of something super soft and soothing and quiet. Being out here, I guess I’ve just noticed how intense it is. Humans are the ones that sort of soften things and make it nicer.” — Shana Cleveland

Lena: I’m in a totally different environment. Florida is extremely wild, not just in terms of weather. Actually, summer is terrible here. I hardly go outside because it’s just too hot. But I’m excited by how many new things I can explore. A lot of the footage from that “In the Country” video is from an island in South Georgia. You take a ferry to get there, and there’s no cars. There are wild horses on the island, which is actually kind of terrifying.

Adrian: As far as nature, it’s not my thing at all. I don’t even go to the beach, I don’t do nothing. My favorite kind of vacation is going to Tokyo or London to dig for records and buy clothes.

Alice: Adrian’s nature excursions are going to the flea market.

Adrian: Yeah, I love a flea market. They don’t like going with me.