In Conversation: Hana Vu on the Metaphors and Metamorphosis of “Public Storage”

The LA-based musician discusses her most collaborative, rock-oriented release yet—one whose “debut album” label tells only part of the story.
Menu

In Conversation: Hana Vu on the Metaphors and Metamorphosis of “Public Storage”

The LA-based musician discusses her most collaborative, rock-oriented release yet—one whose “debut album” label tells only part of the story.

It’s not exactly a hot take to question an artist’s first album being described as their “debut” when they’ve already built a fanbase with several EPs, and Hana Vu’s Public Storage is an especially apt example. In summer 2018, after collaborating with Willow and earning Tegan and Sara’s endorsement, the 20-year-old Angeleno released How Many Times Have You Driven By on Luminelle Recordings. How Many Times is often referred to as Vu’s debut EP, yet its 38-minute runtime is as long as the average LP. Her 2019 double EP Nicole Kidman / Anne Hathaway squeezed 10 tracks into just under half an hour, certainly an album-length duration. So to call Public Storage her debut album might be a bit disingenuous, but it does make a modicum of sense. In many ways, the LP is indeed a new start, if not a forceful push of the reset button.

For starters, Public Storage is Vu’s first release for esteemed label Ghostly International. Though the label is often associated with solo electronic acts, Public Storage is Vu’s least electronic record to date, thanks partially to co-production—a first for the previously entirely self-produced Vu—from Jackson Phillips of indie-rock institution Day Wave. While working on the album, the two dug deeper into the rock underbelly of Vu’s previous highlights and emerged with a booming, guitar-driven sound. The explosive chorus of Public Storage’s title track is a great example, and so is the balance that “Keeper” strikes between Vu’s more electronic past and rock-indebted present. Vu and Phillips explore these new sonic frontiers at slower tempos than in Vu’s past, and these pared-back paces spotlight the delicate balance that Vu and Phillips strike between restraint and combustibility. They do the same for the inscrutable yet clearly personal nature of Vu’s lyrics, which find the artist questioning notions of family, what we find in other people, and, ultimately, her place in the world.

We recently spoke with Vu about the extended metaphor underlying Public Storage, the desperation and impatience behind the record’s genesis, and the moment she realized that Phillips was the perfect co-producer.

I understand how the album’s titular public storage metaphor—the idea of items in storage units—might describe the structure of an album, but I’m curious how the metaphor impacted the music itself.

With all the projects I’ve released in the past couple of years, I would describe them as sonically very eclectic. The music you make is all derivative of the music you listen to, and I never gravitated toward any one type of music. I would collect all these different references all the time, and I never found one genre that I wanted to form my songwriting identity into. Sonically, the eclectic, jumbled nature of it lent itself to the public storage metaphor.

“The music you make is all derivative of the music you listen to, and I never gravitated toward any one type of music. I would collect all these different references all the time, and I never found one genre that I wanted to form my songwriting identity into.”

A lot of music I’ve heard from young people seems to be more atmospheric, versus experiential music where it feels like, “This is a story I see myself in,” whereas atmospheric music is like, “This song plays in the background of my life.” I wanted to make a really layered and textured record. I didn’t want to have any sort of background-music sound.

I was also wondering if “invasive” is a word you’d use to describe the album and single artworks of disturbing, almost dissociated close-ups of mouths and eyes.

Yeah, I guess they are. I didn’t think it was too insane or anything, but then I was on Reddit and everyone was saying the record cover is horrible. For the art direction, I wanted to make something really eye-catching but also very aesthetically gross and raw—in my own life, those are things I’m drawn to. But I would say this record is pretty layered and lush, and I didn’t think there were a lot of things that looked gross and sounded the way my record sounds. I liked the dichotomy of that. 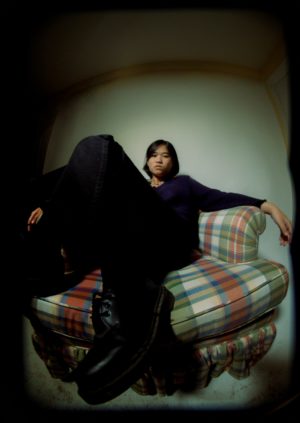 On the title track, there’s a lyric where you say you don’t believe in family. Can you tell me more about that?

People say, “This is my chosen family,” or with your friends, you’re like, “You’re my real family,” and I was thinking about how those sayings are a roundabout way of saying, “I feel very loved and accepted by you, and I love and accept you,” which is not what I think “family” means. It can mean that, but I think it has this American connotation of the end-all-be-all for love and acceptance. I think it means many other things, and I think family is not the concept that we’re beholden to. Those lyrics are about rethinking that framework and being like, “What does anyone think family is?” versus what we’re supposed to feel family is.

I’m curious why that idea felt compelling enough to work into a song.

In that song, I was thinking about things I always thought to be true. I wrote this record when I was 19, so it’s some pretty early adulthood stuff. As you grow older, as you come out of childhood and being in school and living with your parents, you have to unlearn a lot of things to know yourself, what’s true, and what you believe is true. So maybe I don’t believe in family in the way that it’s presented in the general culture.

“I felt like I wanted to have control and be a multi-faceted, self-produced, self-writing do-it-all, and it’s hard to relinquish that control of your own music and your own project. It took some growing up to realize that it’s OK.”

When you hear these songs that you wrote when you were 19, how much do they feel like your current thoughts?

I definitely still think and feel the same way I did when I wrote this record. There were certain aspects of myself and things I was thinking about that I felt pressed to emphasize or caricaturize in this record to get it all out of my system, but I definitely still resonate with it. I’ll probably resonate with it forever. With my songwriting, there are aspects of myself or things I want to write about that I run with and emphasize. When I was writing this record, I was really desperate to get to some other place in my life where I was this idealized version of myself and everything I wanted to be. I wanted to have that immediately. I’m a very motivated, ambitious person, and when I was younger I wanted to get somewhere else all the time. Now, I’m a bit more at ease, but that was definitely a big theme of the record.

It sounds like a thing of impatience too. How did bringing in a co-producer for the first time relate to that impatience?

I was only working with myself before this record, and I was never where I wanted to be. I thought, for this record, if I really want to do everything I want to do and have everything that I want, I have to make the best record that I can, and I want to play to my strengths versus trying to do everything all the time. I could’ve tried harder to collaborate previously, but I was never open to it because when you’re a young artist—and you’re a young artist of color, too—there’s a lot of pressure. But I felt like I wanted to have control and be a multi-faceted, self-produced, self-writing do-it-all, and it’s hard to relinquish that control of your own music and your own project. It took some growing up to realize that it’s OK. FL