The band’s drummer and album designer discuss the new collection of illustrations and lyrics by the late frontman.
Menu

The band’s drummer and album designer discuss the new collection of illustrations and lyrics by the late frontman.

Before he was a critically acclaimed songwriter, Frightened Rabbit’s frontman Scott Hutchison was an artist and illustrator, something that continued throughout his tenure in the band until his untimely death in 2018. Together with album designer Dave Thomas, the two created the band’s unique aesthetic and came up with album art that reflected the deep feelings and sentiments in Hutchison’s lyrics, which have connected with countless fans all over the world.

We caught up with Thomas and Frightened Rabbit drummer (and Scott’s brother) Grant Hutchison to discuss The Work, a limited edition hardcover book they compiled that contains all of Scott’s lyrics as well as handwritten notes and never-before-seen illustrations. If you’re a fan of the band, The Work is an excellent companion to Scott’s songs and is a tangible document of the creativity, skill, and depth that he put into every lyric and illustration throughout the band’s discography.

Over the course of our conversation we also discussed Thomas and Scott’s creative relationship, how putting together this book was healing for those involved, and whether the band will ever be releasing new music based on the demos Scott was working on prior to his death. 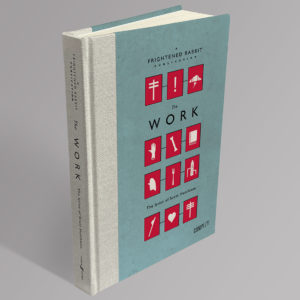 How did this project come together? Is this something you had talked about with Scott?

Dave Thomas: Yeah, it was something Scott and I had talked about primarily around the [tenth] anniversary of [2007’s] The Midnight Organ Fight. We were talking about ways to put books together, and a lyric book was one of the things that had been discussed at length. Scott had started some illustrations with that in mind; fully expanded versions of the lyrics with old illustrations all the way around, just integrated with them. I think he had done maybe three or four, and some of them have found their way into this book in a slightly different form to how it was originally discussed, but they were such beautiful things and we felt it was the perfect place to piece them in among other kinds of notebook sketches and things like that.

That was how things started a number of years back, and we kind of picked up the conversation a year ago. It seemed like one of those easy decisions to make between everyone involved; this was something that we wanted to complete in whatever way we could and get it out into the world.

“There was a creative evolution in Scott’s writing, not just with the lyrics but in the music as well. You could tell his writing became more sophisticated as the years went on.” — Grant Hutchison

Grant, where were all these artifacts, and what was this process like for you creatively?

Grant Hutchison: I have various boxes of Scott’s: illustrations, lyrics, sketchbooks that we got from his flat. I’ve kept a sort of “Frightened Rabbit” box. I’ve been through it a couple times and I find it a quite enjoyable thing to do, although it’s hard. I guess it’s maybe the closest and most real thing to him that isn’t the music, because for me sitting down and listening to the music doesn’t really make a lot of sense.

When they imagined the Midnight Organ Fight anniversary, some of those handwritten sketches came up at that point when we were doing the covers record called Tiny Changes. At that time it was discussed and we realized that maybe that wasn’t the place for those artifacts to exist. So when we decided we were going to put together a lyric book, I went back through them all and picked out bits and pieces that I thought would have been most appropriate, most interesting, funny as well. One thing that we tried to do was get a bit of Scott’s humor in there. I sent him as much as I could and let Dave pick through the bits that he thought would suit the lyrics best.

In the foreword for the book you write, “These words will always bring us into Scott’s world, often with brutal honesty.” Grant, as a member of Frightened Rabbit, what was it like looking at these songs in a more linear way for the book?

Hutchison: When it came to proofreading it, which myself and Dave and obviously the publisher took a responsibility to do, I sat and listened to the songs while reading the lyrics just to make sure everything was right. Experiencing it like that—as opposed to live, where we would play a song from this album and a song from that album and kind of jump around—there was a creative evolution in Scott’s writing, not just with the lyrics but in the music as well. You could tell his writing became more sophisticated as the years went on. Like it says in the foreword, hopefully people can jump in and out of Scott’s world. The way [each album was written] is a timestamp on his life essentially because he wrote about himself. They’re all biographical to an extent.

“With Scott it’s like there was an evolution in his songwriting and in the music, so we were playing similar games with the artwork. There was always a thread that would run through because it was personally made by me and Scott together.” — Dave Thomas

On top of just seeing the progress as an artist, it was also like, “OK, that song might be particularly difficult for me to listen to because I know the origins of it”—the last record [2016’s Painting of a Panic Attack] being probably the heaviest. It was the last one he wrote, so obviously regardless of whether you’re looking at it from the outside or the inside, it’s fairly obvious he wasn’t in a good place. But overall I can approach it from the same point as a lot of fans can because we were never involved in the lyrics. This book has nothing to do with me, so I can look at it and appreciate it in maybe the same way you do, which feels quite unique from being in the band myself. So alongside everything I mentioned about how difficult it was, it’s also amazing for me to see and celebrate how fucking brilliant Scott was, as the letter says. 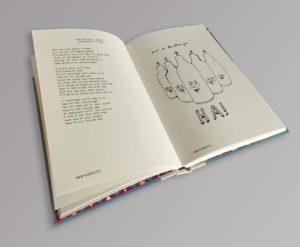 Something that’s so distinguishing about Frightened Rabbit is the aesthetic continuity between the albums—they all look very different but also connected. Dave, how much of that aesthetic came from working with Scott?

Thomas: I guess it’s something I love about working with a band over multiple records; I’ve been able to do similar things with bands like The Twilight Sad, where each album does have its own feel, so you kind of approach each record as much as possible as something fresh because the ideas are coming from a different place. But always with Scott it’s like there was an evolution in his songwriting and in the music, so we were playing similar games with the artwork. There was always a thread that would run through because it was personally made by me and Scott together, and I suppose when we picked up specifically that cross around the time of the first single from [2010’s] The Winter of Mixed Drinks, it started popping up more and more.

“Scott’s ideas were the seed, but without someone who was able to turn them into something more tangible, they would have just stayed as what they were, which is sketches on a piece of paper. So it’s kind of incredible that Dave and Scott managed to meet.” — Grant Hutchison

We had conversations about using it, but never really explaining why, and it would kind of take on its own meaning. I really like the fact that as a symbol, that two- or three-pronged cross has actually done what we talked about for years, which is everyone brought their own kind of thing onto it and now it’s grown legs and it’s associated with the stuff that’s going on around Tiny Changes and talking about people’s mental health. It’s almost become the symbol for that without us ever deciding that’s what was going to happen.

Hutchison: I think [Dave’s] role in bringing Scott’s vision and sketches to a place that people could see them and love them was a vital part in the whole aesthetic of the band. Scott’s ideas were the seed, but without someone who was able to turn them into something more tangible, they would have just stayed as what they were, which is sketches on a piece of paper. So it’s kind of incredible that Dave and Scott managed to meet. [Otherwise] we wouldn’t have had the same attachment to our imagery and aesthetic that we did because of the way that Dave brought Scott’s art to life.

I recently found an email Scott wrote me from January of 2018 where he talked about how he was working on demos for the next album. I’m wondering if the process of putting together this book has made you want to revisit any of the demos.

Hutchison: That’s a conversation the band have had since Scott died. We have demos and I think straight away we were like, “OK, the way that music and recording and technology is now, these demos will probably never go away, someone will find them at some point and want to release them.” So we kind of feel like, “This is Scott’s last work and if he would have trusted anyone to finish it off, it would be us.” I think this project and the act of just listening back to all the songs again…I’ve played drums for the first time in a couple of years, just playing along to songs that I learned to play the drums to. I think we do feel like maybe [this] year at some point we could either sit in a room or just separately pick up our instruments and play along to those demos and maybe revisit them and get them out there. Whether it’s in an album format or whether we just decide to release them as we feel they’re ready, I think we feel a responsibility there to kind of finish off unfinished work for sure. FL