Jeff Nichols is a brave man obsessed with fear. As a director, his films have been uniformly ambitious, assured, and unusual; his characters, like his metaphors, have been as broad as they have been profound; and his budget has increased in step with his reputation. But it is nice to see that, with Midnight Special, the director of Shotgun Stories, Take Shelter, and Mud has not allowed a studio backing to affect him or his characters’ wardrobes. He is still cloaked in ambiguity, and they are still cloaked in hand-me-downs. (The spirit of ’90s-era David Gordon Green is alive and well.)

The shabbiness, it should be said, is not un-apt. Because for all of Midnight Special’s polish and effects, this is still a movie that features nocturnal humans, federal agents, on-location shoots in New Mexico, and Michael Shannon’s tire-worn face. It is, in other words, a genre picture. The only question is: which genre? So let’s start there.

The film begins in darkness, with a radio bleating out an Amber Alert. We then encounter the child—wearing goggles, ear protectors, and a sheet over his head—before we rush with him into a car and hit the highway (road movie ahoy!). Then we’re on a two-lane blacktop with our band of outlaws, still piecing together the rules of this game as the driver puts on a pair night-vision goggles and turns off the headlights. (Okay, so scratch all that; this is either a supernatural thriller or a twisty psychological suspense film—but either way that night-vision move is fresh to death.) Then some supernatural lights blast through our lil’ hero’s eyes. (waddup ’50s sci-fi!), and then meteors touch down at his bidding (waddup contemporary sci-fi!), and then misguided human forces step in, and then the family hugs (waddup Spielberg sci-fi!). And then, well, then Nichols runs into his usual quandary, in which he has to put a period to a film that is all about ellipses. And so it becomes a pretty cheesy science fiction film. (Sigh.)

This is a movie that contains multitudes, and yet it never feels out of control; it feels, if anything, restrained. And that should not come as a surprise to any longtime admirers of Nichols’ work. He has the ability to take crude setups and very raw materials indeed (a family feud in Shotgun Stories, an impending storm in Take Shelter) and refine them to the point that they feel endlessly pliable and rich. By removing extraneous dialogue, he winds up with movies in which silences appear to scream. And if, on occasion, his characters do wind up giving voice to what more properly belongs to silence—if, as happens here, a hero happens to opine that “good people die every day believing in things”—well, that’s the price of trading in ambiguities. Because, when the characters do speak, their words carry an unusual weight, for better and for worse.

This is a movie that contains multitudes, and yet it never feels out of control.

In his earlier films, Nichols’s camera-work had an almost austere quality to it, culminating in the climactic shots to Take Shelter, which steadfastly refuse to take us where we want to go and show us what we want to see. Midnight Special takes a much more mobile and fluid approach—an approach that feels proper to the highways on which so much of the film takes place. In one particularly arresting sequence, a camera that begins in hot pursuit of a fleeing car rises slowly above that terrestrial plane: first above the road, then above the canopy, and then into the sky, where we see a cluster of helicopters buzzing above the earth like so many dragonflies above a pond. That shot alone is worth the price of admission. It has echoes of Kubrick and The Shining, but it also manages to do the very ambitious thing that Nichols, like few others, is always striving to do: to bring the prosaic into the realm of the spectacular.

It doesn’t always work, thanks in large part to the dialogue. As in his previous movies, there are several lines whose baldness becomes especially hard to take, given the writer/director’s overall asceticism. But the lines that do land—and they are plentiful—maintain an incredible sort of tension between the two abysses of credulity and despair. He has, yet again, made an utterly gripping movie that begins gloriously, proceeds well, and ends, well, badly. 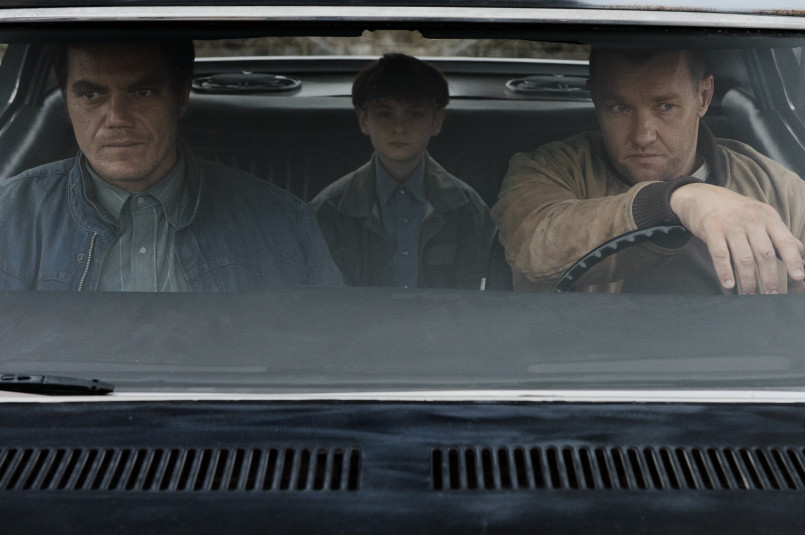 When Midnight Special is good, credulity and despair intermingle and cannot be separated. That happens when the eight-year-old hero’s protector cuts the lights on his ramshackle car and relies on night-vision goggles, rather than magic, to guide him down the two-lane blacktop. It happens when Sam Shepard, as a pastor/cult leader, addresses a drab crowd crowded in a drab room with “a reading from March 17, 2011.” Everything is familiar here, and everything is foreign.

All that said, Nichols is making movies that keep us in suspense because there is literally no telling what he will do next. His eloquence, like Michael Shannon’s, lies primarily in silence, but those silences provoke much more in the way of suspense than they do in surprise. (We keep not knowing.) And the silence that this director give us in his final shot is enough, I think, to keep any damning verdicts at bay. When the danger is everywhere, we are always outflanked.

Or, as Jeff Nichols might put it: “Congratulations, it’s a boy.” FL