The Diabolical Friendship Cure: Alternatives to the Unholy Bro-ly Alliance of Trump and Putin

Donald Trump and Vladimir Putin are threatening the evil friendships genre by implicating it in their anarchic plot to destabilize the world; but that doesn’t mean that all diabolical friendships are bad. Let us count the ways.
Menu

Donald Trump and Vladimir Putin are threatening the evil friendships genre by implicating it in their anarchic plot to destabilize the world; but that doesn’t mean that all diabolical friendships are bad. Let us count the ways.

FLOOD’s weekly Pop Culture Cure offers an antidote—or five—to the most upsetting developments of the past week. (Because therapy’s expensive, and entertainment’s not.)

Vladimir Putin is the brutal Russian dictator who never met a sickly orange animal he didn’t love to coddle; Donald Trump is the Republican presidential nominee who never met a callous dictator he didn’t love to woo. And so the two came, inevitably, together. They are bad, they are buddies, and they are too geopolitically worrying to offer much in the way of entertainment. That said, the bad buddy model is a good one, and we shouldn’t throw the bad-babies out with the bad-bathwater. So here’s a list of diabolical friendships that have the power to entertain rather than terrify.

George Lucas, man. What a joke…and yet, what a genius. There’s no way to summarize that scene above with any kind of objectivity and not sound a lot like Sarah Gailey did here (a lot like, but not like like, because she obviously did it best). This scene has everything: Lord Space Voldemort, a turtle in a hoodie, swords-but-not-swords, Grecian themes, biblical power struggles, and more Catholic imagery than you can shake a cardinal at. AND YET. Darth Vader breathes rad. The Emperor looks rad. And together they live right at the boundary-line of cultural theft and D&D Imagineering—in an uncanny valley between real originality and utter derivation that winds up being effectively creepy. And that is to the good.

Before Peter Jackson was Master of Hobbitses and Kinger of Kongs, he was the director of exquisitely crafted genre works that, with, Heavenly Creatures, took an odd turn toward the real (but not too real). Heavenly Creatures features two young women who are bored by their surroundings but not limited by them, and who seek to imagine (oh, and murder) their way out. They make their own kind of sense, and it all looks incredible enough, and it also features two very not bad actors in Kate Winslet and (Togetherness’s) Melanie Lynskey, and it’s worth checking out. (PS: Jackson’s not the only director who made his legacy within an epic mode but who made real art outside of it too.) 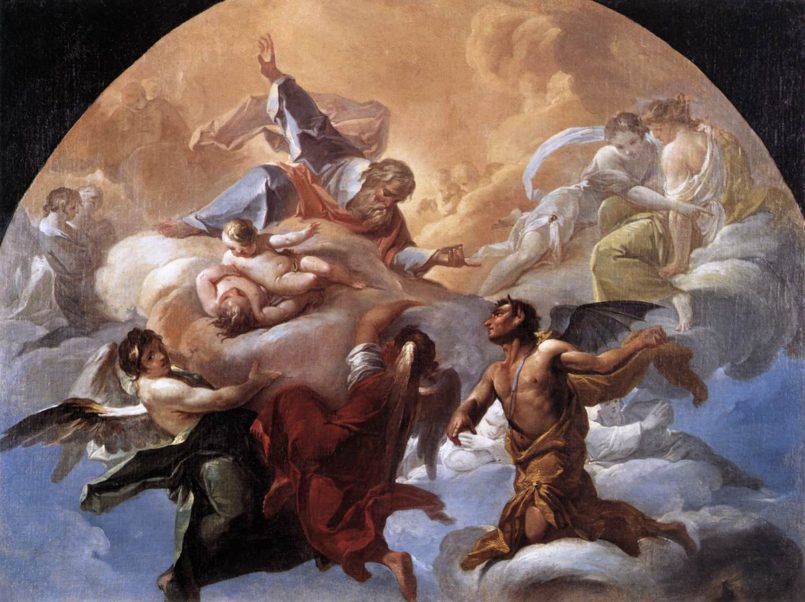 “Satan Before the Lord,” by Corrado Giaquinto circa 1750

Satan and God, “The Book of Job”

So in terms of Bad Boy dream team couples the top three has to include: (1) Will Smith (a.k.a. “The Fresh Prince”) and Martin Lawrence (a.k.a. “Martin”), (2) Christopher Wallace (a.k.a. “The Notorious B.I.G.”) and Sean “Puffy” Combs (a.k.a. “P. Diddy”), and (3) God (a.k.a. Yahweh) and his nemesis—THE NEMESIS—the Devil himself (a.k.a. Lucifer, a.k.a. many other things). They’ve always had a cold war kind of relationship going on, but things were never hotter than they were with Jobe (sic sorry but sic not sorry).

Jobe, let us remember, was just a righteous man. He was like Noah. Just a good-ass dude doing his good-ass things, and surviving, and maybe doing a bit of thriving on the side. I don’t know. Just Jobeing. But then the devil came a-callin and God himself, the Almighty, he took that call. And for lack of a better word, I think that makes them “partners.” The phrase “a deal with devil” has rarely been more apt.

God made a deal with the Devil ensuring that the devil could molest Signor Jobe unmolestedly and wagering (a sin!?) that Jobey would still come out on top. Repeat again: God made a deal with the devil. And I guess God came out on top and all was restored and everything, but if you’ve ever had a pox upon you, that’s some shit you don’t forget. So yeah, God and the Devil: bad dudes, and a bad team. Stay away.

Time and the American Dream, “The River”

I had a baby recently (Thanks! It’s a boy! He has/is a dick!) and as a result I do a little bit more karaoke at home now than I used to. But I still sing “The River” once a week or so, to cry and lament and reset and gain a bit of perspective. And one thing that home karaoke has over road karaoke (a.k.a. “just normal karaoke”) is that you’re able to pay just a little bit more attention to the lyrics.

And it’s not that I didn’t realize before that “The River” in question here was a metaphor, or that now the river is dry, or that if there’s an heir to Ernest Hemingway it’s probably Bruce Springsteen… It’s just that, holy shit that metaphor is a good one (cf Huck Finn), holy shit that dry river shit is twisty AF, (#storytelling!), and my god, if only Hemingway could sing. Even if the American dream were not also a nightmare for many, and even if America wasn’t frequently a tragedy, I’d be sad to lose the poignancy of this song. (But I’d still make that trade.)

It could be Mike, it could be Saul, it could be Jesse, but in the end it’s really everyone, isn’t it? And that’s the point. The evil touches every part of Walter just as it touches almost every part of almost everyone else, one way or another. But it helps to have a taste for that kind of thing (the hyper-violence, I mean), so if you’ve gotta name a name, maybe it’s best to call Saul (or, via Saul, Mike (and via implication, Jesse)).