The Chicago rapper and singer delivers an album filled with psalms of lament and hymns to hope through hard times.
Menu

The Chicago rapper and singer delivers an album filled with psalms of lament and hymns to hope through hard times. 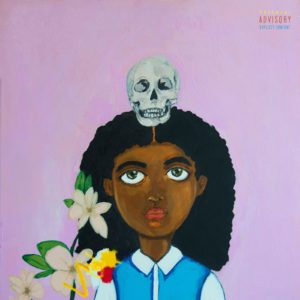 If Kanye West and Chance the Rapper made gospel-rap sound fresh and vibrant, Noname (the erstwhile Noname Gypsy) makes it sound lived in and hard won. All the xylophones, toy pianos, and warm keyboard washes in the world can’t cover the dents and bruises on these songs, and all the girlish whimsy in her voice can’t distract from what they are at heart—psalms of lament, hymns to hope through hard times.

Across these ten tunes, the Acid Rap cohort tells us how she got over, or in some cases how she didn’t. You can take the cover art literally: death hovers just over her head, and, in the last song, she gives us a vision of her own wake: “When I die there’s twenty-seven rappers at my funeral / Moses wrote my name in gold and Kanye did the eulogy.” “Bye Bye Baby” is a song about abortion, delivered with sadness and compassion; it sets its eyes on a “playdate in heaven.” Another one, called “Casket Pretty,” is the perfection of her aesthetic—a skewed, slightly sinister variant on Chance’s jocular street preaching. It needs less than two minutes to etch out a vivid, grief-stricken paean to a particularly black vulnerability: “All my niggas is casket pretty / Ain’t no one safe in this happy city / I hope you make it home / I hope to God that my tele’ don’t ring.”

But while these songs might be weathered, they’re never quite despairing or desolate. That comes down almost entirely to Noname’s performance. She calls on her experience as a slam poet to ride her words through crests and troughs—measured and confident when things get dark, dexterous when the words come out in tumbles. Her duet partners follow her lead: “Rain don’t feel like rain / It’s been so calming lately,”  theMIND wonders in one of them, taking things in stride.

Meanwhile, “Freedom Interlude” is no interlude at all, but rather the crux of this whole record: it references strength, grief, and the American Dream, plus the rise and fall of Bill Cosby; it ends with an extended sample of a Nina Simone interview. Black women have borne weary witness for generations now; their heartache is nothing new. And neither is their resilience.