Though it turns out this isn’t a Harry Nilsson tribute album, the title is still a good omen.
Menu

Though it turns out this isn’t a Harry Nilsson tribute album, the title is still a good omen. 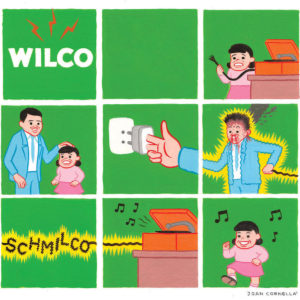 Though it turns out this isn’t a Harry Nilsson tribute album, the title is still a good omen. Wilco are at their best when they’re having fun, playing loose, and not taking themselves too seriously, and Schmilco’s tossed-off christening is no accident. Even more than last summer’s Star Wars and its meme-ready cover art, Schmilco captures the agreeable energy of an unfussed-over jam session. Largely acoustic, unpretentious, and uncluttered by thematic or conceptual baggage, this is Jeff Tweedy and the gang just kicking out some jams in their Loft studio.

The one little wrinkle here is that the dozen songs assembled on Schmilco capture the singer and songwriter in a contrarian state of mind; each one captures a different shade of sad or grumpy. “Normal American Kids,” a folk ditty so feathery-light it sounds like a strong wind could blow it away, is an outsider’s anthem, delivered with a whisper. There’s a slow dance called “Happiness” that shimmers with sorrow and is loaded with images of loss. Then there’s one called “Someone to Lose” (as in, “I hope you find…”), which takes seriously the likely pitfalls of being vulnerable enough to care.

But if that reads as a little dour, the record itself is never morose; Tweedy delivers these songs with a wink and a smile, and the role of the grump suits him well. Meanwhile, the band plays with warmth throughout, leaning into their melancholy, savoring the romance of sad songs.

These low-key tunes mask an offhanded virtuosity, too. Though they only really shred on “Locator,” and the buoyant and irresistible “We Aren’t the World (Safety Girl)” is the closest they get to power pop, Schmilco really has almost everything the band is good at: wistful country, prickly pop, and—most surprisingly, and most appealingly—unabashedly tuneful soft rock. “Nope” rides a kick-drum thump pitched somewhere between Mumford & Sons and “Bron-Y-Aur Stomp.” “Shrug and Destroy” is a jazzy shuffle. The pulsing “Cry All Day” is sweet and simple, but it builds a full head of steam and becomes some kind of an anthem.

Meanwhile, the aspects of Wilco that some may find the most tedious are thankfully absent here. Nowhere on Schmilco do they simulate a migraine or turn to Jim O’Rourke’s complex sonic gauze, though Nels Cline dabbles in weird electronic gurgling throughout, adding flavor and color to Tweedy’s simple tunes. You can hear it best on “Common Sense,” which comes all decked out with junkyard percussion and creepy guitar moves. This has always been a band that loves to noodle around, and their playfulness is uniquely appealing here because it never gets in the way of the songs.

And speaking of the songs, Tweedy’s still a little opaque, but he can be a straight shooter when he wants to be. On one track he fumbles for direction—“A burning bush or a button to push / A chance encounter with common sense”—which sounds fair enough, though maybe the burning bush can explain the lyric about Jesus mowing his lawn. Surely it’s all in good fun, as is the rest of Schmilco—a great record from a band that needn’t overthink things.