The Back Pages: Tom Tykwer and The Wachowskis’ “Cloud Atlas”

The 2012 film adaptation of David Mitchell’s grand story has its share of flaws, but it exceeds Mitchell’s work in the novel’s grandest ambition: being a moral work of art.
Menu

Art & CultureFilm + TV
The Back Pages: Tom Tykwer and The Wachowskis’ “Cloud Atlas”

The 2012 film adaptation of David Mitchell’s grand story has its share of flaws, but it exceeds Mitchell’s work in the novel’s grandest ambition: being a moral work of art.

The canon is hardly foolproof. It’s generally not wrong—no one’s saying there’s any argument to be made against Sgt. Pepper’s or The Godfather—but it is incomplete. Sometimes it’s underexposure and sometimes it’s overexposure, but for whatever reason, things fall through the cracks.

With that in mind, The Back Pages is a crate-digging, B movie–watching, moldy book–reading column with the intention of offering a hand from the departing ship of the common vernacular. It’s cultural mutiny, from stern to bow. Jump aboard.

A lot of novels have been called “unfilmable” that wound up being perfectly filmable indeed, under the right stewardship. Tristram Shandy is one example, Naked Lunch is another, and Life of Pi certainly also qualifies. David Mitchell’s Cloud Atlas stands out from those in that the difficulty lies not so much in the work’s content—the novel is awash in dialogue, plots, and characters—but in its length. It is not one novel (or not just one novel) but six expertly braided miniature novels, all of which can certainly be imagined at feature length, but none of which seem readily abridgeable into the twenty-five or so minutes that the Wachowskis and Tom Tykwer actually had at their disposal.

So that was the challenge the trio of directors faced: distilling a millennium-spanning, plot-packed, hyper-verbal, genre-fluid, 600-page novel into a film of just under three hours. But it wasn’t the only challenge—or even the most important one. Because Mitchell didn’t just intend for his book to serve as a trump card in a literary parlor game; he also sought to make a moral point. He bound Cloud Atlas’s disparate characters together via reincarnation (a fact at which he only hints, via birthmarks, but which becomes more and more explicit in his later novels), and although it does feel a bit too tidy and a bit too cute, that’s not to say that the underlying idea is not a good one.

This is less a matter of casual tourism than it is a moral reckoning.

So much of contemporary literature is predicated on the idea that empathy is the paramount experience—that if you can make a reader feel along with your characters, you have succeeded. The less sympathetic the character, according to this formula, the greater the degree of difficulty, and the greater the artistic success should you feel something for that character. I have no way of knowing if Mitchell has always balked at this trend, or if the science-fictionalized idea of reincarnation just happened to suit his own personal set of obsessions, but I do think he has struck out in an interesting new direction. His multiverse forces readers to not just imagine themselves in the unenviable position of its main characters, but to consider the possibility that they might be born—or reborn—into any life, any time, any place. This is less a matter of casual tourism, then, than it is a moral reckoning. His novels aren’t about feeling what a slave feels from the comfort of our couch, but considering seriously the idea that we could be a slave, a prisoner, a victim, a tool, a commodity, the prey. Cloud Atlas is many genres, but it’s also, most deeply, a work of existential horror. 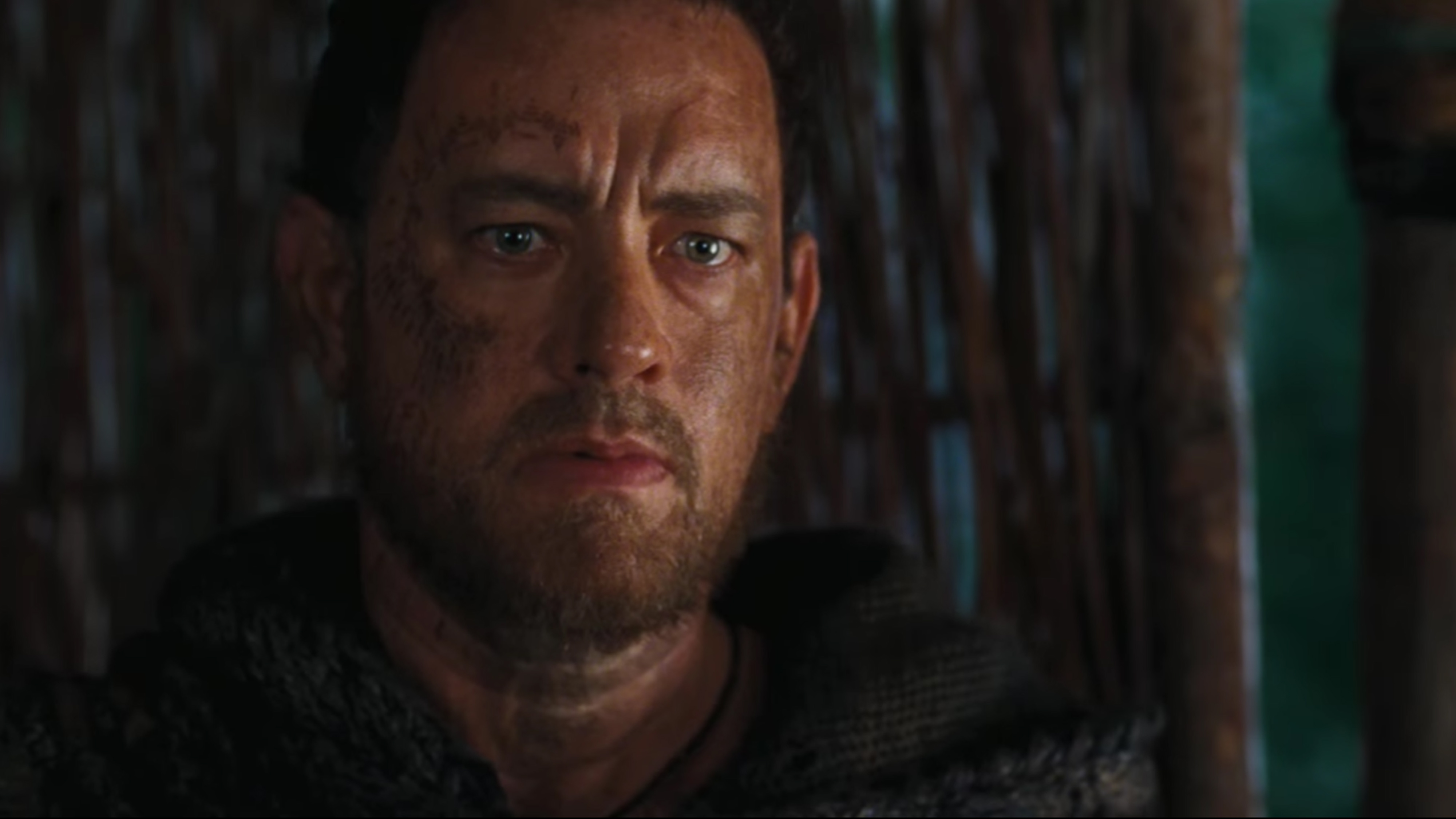 That was the intention anyway. But like I say, it is also a big novel, and a few similar birthmarks spread across the centuries aren’t enough to make the reader—even the generous genre reader (which I consider myself to be)—believe in the reality of this reincarnation-fueled multiverse. This is the one point where Mitchell’s novel falls flat. We believe deeply in the reality of his worlds, his characters, their words, their actions, but it’s hard to put credence in the metaphysics. It doesn’t keep the novel from being brilliant or invigorating, but it does perhaps keep it from fulfilling Mitchell’s own grandest ambition—that it could be a moral work of art.

Which brings us to the adaptation. The film was released in 2014, so it’s not hard to imagine a world in which the book might have become a sprawling HBO miniseries, à la MaddAddam or Game of Thrones, but the limitations of a movie come with benefits too. Foremost among those is the fact that such abbreviation must of necessity bind the characters much more closely together. So even while the film had to—and did—sacrifice subtlety, it gained potency. It could finally make its point. But as to that question of cost…

This is a movie that deserves a far better fate than mere indifference.

It’s not for nothing that the Cloud Atlas film has the reputation it does—which reputation could best be summarized by the word “indifferent.” But indifference is pretty impressive for a film that has Tom Hanks in multiple roles; multiple characters playing characters of other races(!); and a narrative structure that is most closely identified with the works of Richard Curtis, Garry Marshall, and a sordid collection of American holidays. This indifference would, I think, have been even more unlikely were it not for the fact that Tykwer and the Wachowskis resisted some of Mitchell’s genre playfulness. They united Mitchell’s references and styles via an atmosphere of sentiment that is perhaps best exemplified by the wonderful score—sentimental, but not un-lovely.

But this is a movie that deserves a far better fate than mere indifference. In a world where so many adaptations exist solely to bring stories from the page to the screen, Cloud Atlas sought to do the book one better—and succeeded. The movie’s ability to show different actors reborn into different characters achieves, through that obvious tactic, what the book could not. By the film’s end, the cumulative effect of having watched so many humans and humanoids brutalized was, for lack of a better word, affecting. Film has little trouble achieving the effect that Mitchell so desired: of connecting time and people across incredible distances. They even have a word for it in the film industry. They call it a cut.

Tykwer and the Wachowskis clearly saw the benefit of adapting Mitchell’s novel into this new medium, but that’s not to say that their job was a simple matter of transliteration following that insight. Mitchell probed genre tropes from film and television as well as books, and T&Ws did the same. Their period drama feels like a period drama, their ’70s conspiracy thriller looks like a ’70s conspiracy thriller, and their dystopian future-scape is of course familiar territory. They may not have mimicked genre styles as impressively as Mitchell did (their movie feels much more like one movie, whereas Mitchell’s book feels more like six books under one cover), but the genres are still lovingly rendered. We dwell in these worlds in much the same way we luxuriated in the dialects of Mitchell’s novel.

But I won’t pretend that this movie would have any staying power were it not for the success of its episodes. Those episodes, for all their blemishes, have an undeniable vitality to them. There is life here.

I love these scenes. And although they may work more quietly and less problematically as presented here, in isolation, I admire and find it beautiful that Tom Tykwer and the Wachowskis sought, like Mitchell, to find a deeper meaning and land a more powerful punch. It may be on the nose, but propaganda has to be. And it’s hard to find a juster cause—or a more underserved one—than our shared humanity. If Cloud Atlas is gauche, I don’t want to be cool. FL