The “One Month Until the Election” Cure: Luxuriating in Pop Culture’s Quiet Preambles

It’s a little more than a month until the United States will have an election that has the capacity to literally make Donald Trump the most powerful man in the world. But right now, today, we simply wait. We are not there yet. And these first acts celebrate that vibrating moment before the plot thickens.
Menu

Film + TVStaff Picks
The “One Month Until the Election” Cure: Luxuriating in Pop Culture’s Quiet Preambles

It’s a little more than a month until the United States will have an election that has the capacity to literally make Donald Trump the most powerful man in the world. But right now, today, we simply wait. We are not there yet. And these first acts celebrate that vibrating moment before the plot thickens.

As a child, I was so terrified of impending doom that I literally ran away from my cousin’s birthday party rather than stay to see whatever it was that Nuclear Man was going to unleash on my beloved Underpants-Outside-of-Pants Man in Superman IV. (I still don’t know, nor have I been invited to any of my cousin’s subsequent birthdays.) As an adult, I can now suffer through fictional hardships, thank god/media, but I still really appreciate it when movies that are about to rip your heart out (or sever a character’s spinal cord with a spoon, or what have you) take the time to really savor the languid moments before everything goes to shit. Those scenes have the capacity to not only raise the stakes for what’s to follow, but also form beautiful little one-acts: tense but lovely portraits of lives on the brink, of Eden before the fall (with little more than the shadow of the tail of the snake just peeking into view). The next debate is on Sunday, and the 2016 election is now little more than a month away, but for the moment, all is calm. So are these eight scenes. Let’s sink in…. 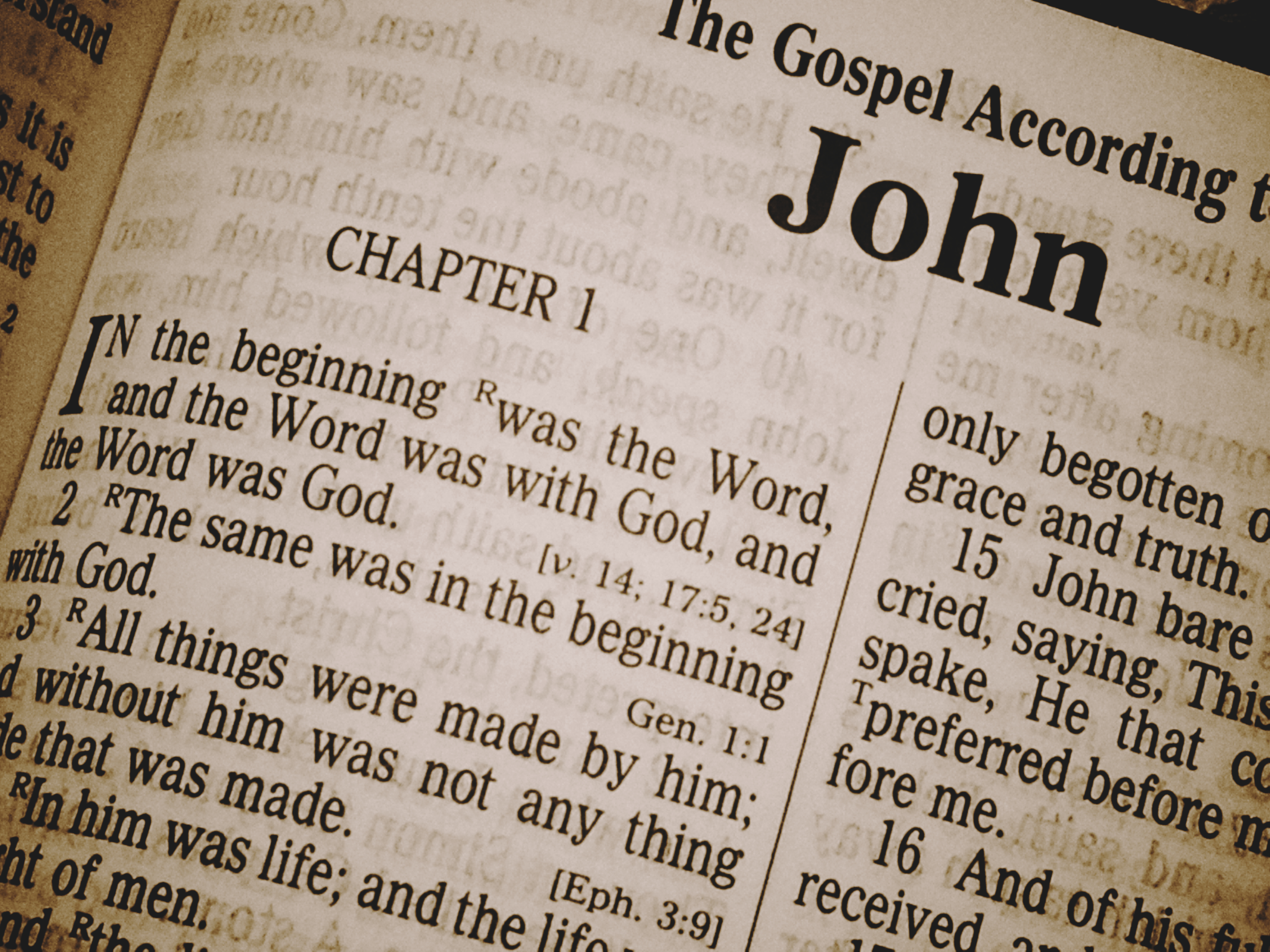 So, say you have about, oh, ten pages to tell the story of how it came to pass that the world’s greatest and only God came to sacrifice his only son (and also, uh, himself?) to torture and humiliation and murder. Where would you start this story? If it were me, I’d be super worried about getting to the point, and dive right in to the plot, maybe even cutting straight to the miraculous bits, but this John fellow took another tack entirely. He started with the most chilled-out, abstract, and cosmically distant opening possible, beginning not with his own birth, or his character’s birth, but the birth of the universe itself: “In the beginning was the Word.” That is a bold and very chill choice. We know things are about to get funky, because you don’t start a happy story with “It all started at Moment Zero,” but it’s super hard to tell exactly how things are gonna go wrong, or where, or how, or how soon, or what planet we’re even on. In conclusion: this is the ne plus ultra of disconcertingly peaceful beginnings (because truly, shit is about to get very, very real, world-historically speaking).

My family didn’t own this movie, but we could have owned it five times over with the money we spent renting it. My youngest brother was obsessed with it, and it thus haunted my childhood. The movie is fine, racist bits aside, but trust me when I say it cannot hold up over sixty viewings. That said, its opening scene, like the novel’s, is utterly charming. I still watch it and feel the terror of knowing that they are about to sing “What makes the red man red,” but I also luxuriate in this pleasant, quirky home, this little oasis, this lifeboat from which the idiot children are all too eager to escape. Let the great world spin, I say, and fuck Neverland: this is my paradise.

The end of the tour with the band in Green Room

Most of Jeremy Saulnier‘s Green Room takes place inside a single building, but the journey that The Ain’t Rights take in order to arrive at that fateful location is wonderfully specific and, for lack of a better word, believable (an unusual trait for even the opening act of a horror movie). We watch as these workaday punk rockers oversleep, bicker, siphon gas, get weary, and try to make art when the art is the job and the job is paying very, very poorly. We want things to get better for them, and we want to keep traveling with them, and we very much wish they would not have taken that strange-sounding gig at the white supremacist outpost in the Oregon woods.

I wasn’t raised on these books or anything, but if there’s an archetypal beginning to the epic journey, The Shire is it. In a book that reads a lot like World War II, this is a village straight out of a Ren-Fair (complete with poor personal hygiene, abundant frockery and smockery, and absolutely no threat of violence or ill use, despite a culture of riotous alcoholism and a town full of suckers). I realize that Middle Earth as a whole collapses if the hobbits don’t leave The Shire, but at the same time, perhaps The Hobbit would have been a better movie if the hobbits just stayed put? Just a low-brow fart-comedy for medievalists? I don’t know, I’m just spytte-balling. Suffice it to say that The Shire is the thing that makes the rest of the journey so tense. We all just want to go home again.

The trip to Bodega Bay in Alfred Hitchcock‘s The Birds

The Birds is ominous, from the first scene to the very last, but the opening scenes delight in playing (only somewhat sadistically) with our expectation of destruction, as we witness pretty scene after pretty scene and only see our first drop of blood after we’ve bopped around town with Tippi Heddren as she develops a crush, buys lovebirds for said crush, and then takes a drive, avec lovebirds, north of San Francisco into Bodega Bay in order to gain her prize. It’s like a great episode of Bay Area Backroads, but with the threat of utter desolation looming overhead. Nonetheless, I’d risk death and destruction to spend a night in Bodega with Tippi and Rod. Bonus feature: Tippi and Rod’s race to the house, via car and boat, respectively, is a directorial high-point, even for Hitch.

The dinner party in Tell No One

For me, Tell No One is the perfect Netflix movie: it’s as thrilling as The Fugitive, as moving as, uh, About Time (is that wrong to say?), plotty as hell, and endlessly fun, even over multiple viewings. It’s also still relatively unknown, so do yourself a favor and make yourself know it. But it’s relevant here because in the few minutes before the main character’s life falls apart, we get to watch him and his wife at their ease, amongst their friends, at a no-stakes dinner party in the French countryside. This scene makes us believe that this is a couple whose relationship is good, whose taste in music is eerily cinematic, and for whom we must root. Please god, let this man put Humpty together again.

The trip to the museum in Donna Tartt’s The Goldfinch

The Goldfinch is a very long, very good book, and its plot begins with an absolute bang at just the moment when we are beginning to think that maybe this is just a book that’s longer on pages, perhaps, than it is on plot. Up to that moment, we are breathing in the relationship between a boy and his mother, and reveling in the occasion to cut school with him and spend time with her. And then… well, then everything else. But that day haunts everything in this book, and it’s a universal kind of day, and it’s good to linger there, for as long as we can, in that eternal before.

The bedroom in Goodnight Moon

I am actually moved by the windows in Goodnight Moon. This despite the fact that this children’s book is literally insane, and must have been created either by gonzo surrealists or by mush-obsessed aliens who were very new indeed to concept of meter (or basic decency). But that room tho. And those windows tho. And those colors tho. Goodnight world, I’m staying here, with these three little bears (from The Shining) sitting on chairs (for now), and three little kittens, and a pair of mittens, etc. This is the book that brings us into consciousness, and after that, well, you know the rest. #GoodnightInnocence FL