Laugh Finds a Way: Patton Oswalt and the Performers of Festival Supreme Rock, Talk, and Mock in the Face of Chaos

Tenacious D’s fourth annual smorgasbord of music and comedy in LA blended the elation of the holiday weekend with the doom of the impending election—and brought some much welcomed talking for clapping for one performer in particular making his return to the stage.
Menu

Laugh Finds a Way: Patton Oswalt and the Performers of Festival Supreme Rock, Talk, and Mock in the Face of Chaos

Tenacious D’s fourth annual smorgasbord of music and comedy in LA blended the elation of the holiday weekend with the doom of the impending election—and brought some much welcomed talking for clapping for one performer in particular making his return to the stage.

The Shrine Auditorium at University of Southern California’s campus is the largest proscenium stage in North America. In the past ninety years, it’s dutifully held the weight of ancient orchestral standards, rock stars’ massive egos, and the concept of the afterlife in enormous religious services. It even maintained King Kong’s heft in the original 1933 film. And on October 29, twenty minutes deep into Patton Oswalt’s new stand-up material, the stage supported the burden of the elephant in the room. After sharp insights about Trump supporters and Halloween are received with rapturous laughter from his admiring audience, Oswalt takes a breath and says, “Alright, I’ve avoided it long enough.” From there, the stage contained the colossal presence of a beast larger than Kong or God: grief. Or as he calls it, “the Death Slog.”

Like bread or water in times of crisis, you can tell how badly people need laughter by the length of the line for it. Comedy fans starving for distractions from doom and gloom descended upon Downtown LA to queue up around the block for the fourth Festival Supreme, the day-long monster-mash-up of music and comedy curated and hosted by Tenacious D’s warbling warriors Jack Black and Kyle Gass. The weight of unusually-humid air hung around the elaborately-layered costumes worn by at least a third of the attendees; tell Angelenos to dress up and they’ll rise to the occasion, especially geeks, double-especially Halloween weekend, and tri-specially when a retro-sci-fi motif is declared. Hairy Wookiees, foil Benders, and spandex-strangled starship captains all spent the day sweating for what, and who, they loved. 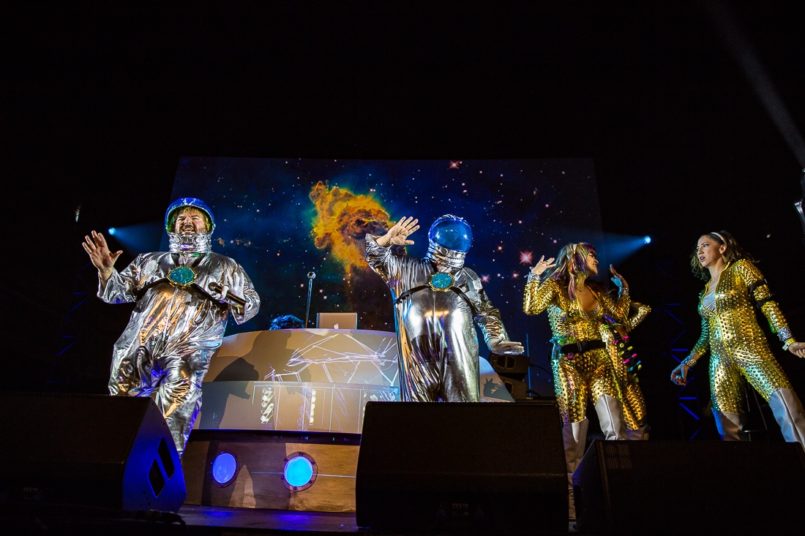 Visitors were funneled into the black vacuum (and mirror ball lights) of the Space Disco room, where Black and Gass greeted their guests as Tenacious DJ, a Dafter Punk in which they donned silver spacesuits and spun Bowie before embarking from the stage to explore the vast reaches of the crowd with high-fives. DJs held down the Disco from there, but comedy nerds are less inclined to dance than drink.

From there, the Omega Stage outside acted as a worthy venue for the larger musical presentations, like Wet Hot American Summer composer Craig Wedren bringing the show’s ’80s-era ballads to life with help from Flashdancers and cast members; Fred Armisen and surprise guest Bill Hader performed as their Documentary Now! post-punk tribute Test Pattern, as much an obsessive love letter to Talking Heads as a parody; and The Vandals, whose smart-ass sense of humor thrived in the Reagan-era punk scene, amped up the packed-but-peaceful parking lot with “Urban Struggle,” their classic ode to more violent parking lot culture clashes.

But the most punk-rock display of the Omega Stage came from an agent of chaos with no musical inclination, but a bottomless capacity for theatrical anarchy: Eric Andre. Reconstructing his Adult Swim deconstruction of late-night talk shows in broad daylight, Andre’s cult following knew they were getting what they came for as soon as stagehands spread the plastic tarp; Andre smashed his desk, sprayed soy milk, crowd surfed, and humiliated (enthusiastic) volunteers from the audience before he wrapped up by stripping down and literally rocking out with his cock out (more accurately, tucked between his legs) and baptizing his worshippers with a souped-up water gun. The nihilism, exhibitionism, and self-immolation onstage presented Andre as the 70s-era Iggy Pop of comedy, someone who has chosen to fight the insanity of the planet by one-upping it. 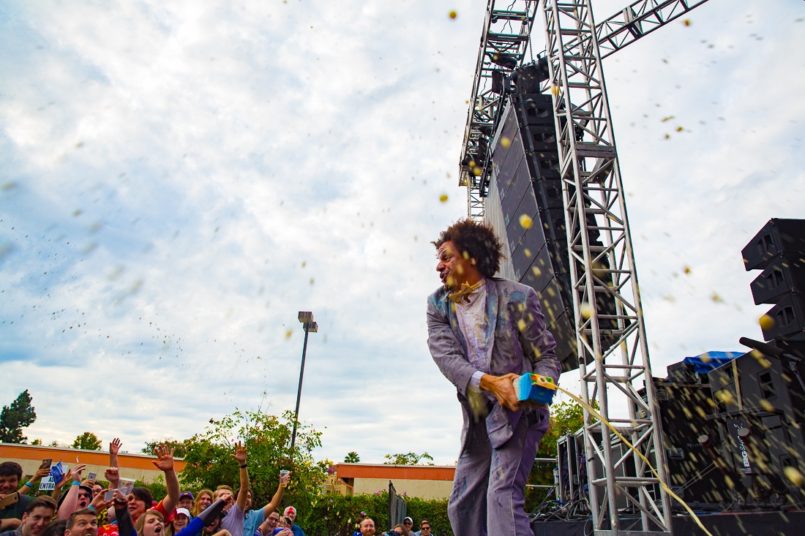 Meanwhile, as the Omega Stage welcomed its dork-iconic headliners in “Weird Al” Yankovic and Flight of the Conchords, the Shrine Auditorium inside (temporarily christened the “Crab Nebula” stage), acted as a reliable altar to traditional stand-up. Though the musical overlap appeared via Maya Rudolph’s portrayal of Patti LaBelle, Will Forte’s a capella James Ingram medley, and most notably, Tenacious D’s unexpected cameo at their own party by reprising the song they contributed to Forte’s famous “Spelling Bee” SNL sketch, Jenny Slate and Sarah Silverman walked away with the crowd’s admiration by aiming their more straightforward sets down carefully-considered tightropes between vulnerability and certainty. Without ever once mentioning his name, they delivered effortlessly defiant statements against Trump’s misogynistic universe simply by being open and candid about their sexualities, anxieties, and inner lives.

If music be the food of love, comedy is the booze that washes it down. And the fans leaping to their feet as Patton Oswalt entered Crab Nebula’s orbit were drunk on deep admiration and supportive love for the consummate comedian whose hour-long set at Festival Supreme marked his first publicized performance since the tragic death of his wife, Michelle McNamara. “It’s been six months and eight days,” he said, rubbing his forehead, as he spun anecdotes of saying goodbye to his wife and consoling his seven-year-old daughter into hilarious tales of inappropriate intrusions from the outside world. He calls bullshit on superheroes who would spin sorrow into bodybuilding and crime-fighting, citing his own coping mechanisms of bad movies and Bugles. He mocks the notion of someday reentering the dating world, imagining his brutally honest eHarmony profile. 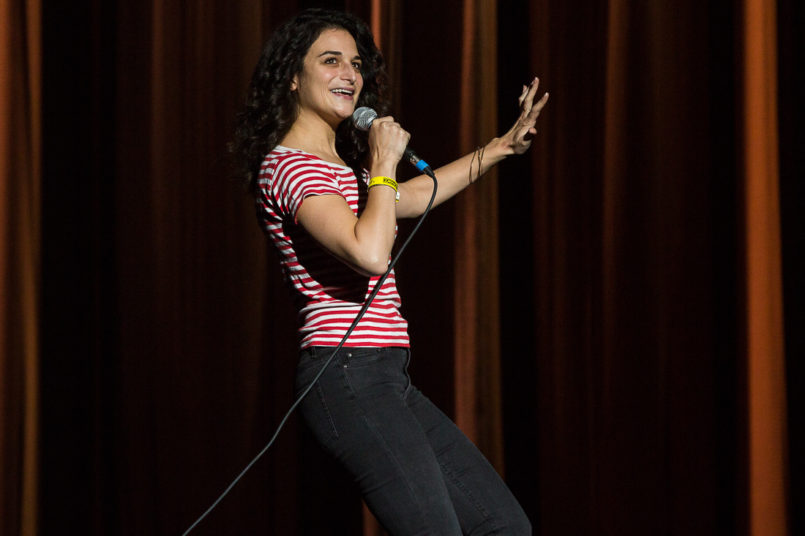 But most encouraging and meaningful of all: Oswalt delivered these sad reflections with the same recognizable, convicted voice heard across six popular stand-up specials, right up to his Emmy-winning Talking for Clapping. He wielded pop culture references, poked fun at his flaws, and calmly eviscerated drunk hecklers at the same skilled heights he’d previously built to. In rock music terminology, the set was a one-man reunion show, with Oswalt pulling all the broken pieces of his heart and life together, microphone in hand. The stand-up is still standing. And as the crowd gave him his standing ovation, Oswalt declared victory over Hell by extending his arms and miming an embrace of thousands of cheering, adulating drunks.

Goodbye to the stages of Festival Supreme, welcome back to Earth. With an overwhelming, overstimulating event like this, where everyone has a joke to share, the comedy’s essential straight man is the harsh reality waiting outside or hovering above our heads. “Laugh and the world laughs with you,” the saying goes, but often it’s the world that needs to be laughed at in order to endure, overpower, survive it. The intersection of music and comedy is a welcome rest stop with long roads of death slogs behind us and uncertain miles ahead. Be sure to stock up on supplies while you’re there. FL

Read our feature with Tenacious D.