In Conversation: “You’re the Worst”’s Chris Geere on Our Duty to be Empathetic

The co-star of FXX’s alchemical comedy talks the season three finale, what to expect next—and the special linguistic privileges afforded the British.
Menu

Film + TV
In Conversation: “You’re the Worst”’s Chris Geere on Our Duty to be Empathetic

The co-star of FXX’s alchemical comedy talks the season three finale, what to expect next—and the special linguistic privileges afforded the British.

You know the traditional rom-com formula: boy meets girl, they fall in love, something bad happens, they overcome it.

If the third season finale of Stephen Falk’s You’re the Worst taught us anything about the show, it’s that it lives and thrives in the “something bad happens” act of that familiar structure. Starring Manchester-based actor Chris Geere as struggling novelist Jimmy Shive-Overly and Aya Cash as music publicist Gretchen Cutler, the show delights in exploring the romantic and professional tussles of its mains, interspersed with fantastic supporting-cast performances by Desmin Borges as the Iraq War veteran Edgar, Kether Donohue as the perennially boneheaded Lindsay, Brandon Mychal Smith as the secretly sensitive rapper Sam, and Allan “Molasses Boy” McLeod as the cuckolded Paul.

“On paper you’re like, hang on, is this a comedy? What are we dealing with here?” Geere says over the phone from England, where he’s at work on a project he can’t announce yet with an American actress whose identity is also a mystery.

In light of this week’s doubleheader finale and its cliffhanger ending—no spoilers, but it finds Jimmy confronting his newfound “post-family” ethos (like “Thoreau or the Unabomber”) in a surprising way—Geere is quick to admit he’s just as anxious as us viewers about what happens next.

You’re back home in Manchester right now. You split your time between England and the States, right?

It’s normally half of the year. This year’s been a bit of an exception. I did a movie in Mexico, so I was there for six weeks. I’ve actually only been home for seven weeks this whole year, which is a bit crazy.

It’s been a weird year in both countries with Brexit and the election of Trump. Does it feel equally strange in both places?

It does feel equally strange. There’s a massive sense of the unknown in both places. It resonates through every working environment as well. I was on set in America when Brexit happened, and to witness people’s compassion from that side of the world toward our country was the exactly the same as last week, when everyone on our British set was feeling it for people in America. There was a huge sense of unity, but also [a feeling] of the unknown. It’s very scary times at the moment and no one is ignoring that.

Reading about Brexit from over here, it didn’t feel like a thing that could happen, and I certainly felt the same way about the presidency of Donald Trump.

Of course! It was the same, going back to the comparison. We were [shooting “The Last Sunday Funday” episode at the time] and doing the firework sequence with Edgar. That’s when the news of Brexit was coming through. We had a similar kind of predicted result and everyone was going no, no, it’ll be fine. And then suddenly it wasn’t.

“When I auditioned with an American accent, I just sounded like a dick.”

But everyone really stuck together. I’m the only British person among the You’re the Worst cast and crew, but people are very clued up on politics and could empathize. We have an American person on our cast on this British project I’m doing—I can’t tell you who unfortunately, we haven’t got our press release yet—so not only do we have a duty to keep on politics, but a duty to be there for her. We know what it’s like to have gone through something like that.

The character of Jimmy wasn’t initially supposed to be British. What about the script that made you think he should be?

My American accent isn’t brilliant—I can try, but it’s never going to be as believable or as good as I want it to be. I did a take that way and right at the end I said I thought the acerbic language lent itself to a British take. They wanted me to be charming and when I did it with an American accent, I just sounded like a dick, kind of a jock. It was offensive and I didn’t see anyone feeling any sympathy or empathy toward the character. And that’s the whole thing: if you’re doing a show about horrible people without endearing qualities you’re going to lose the audience straight away. I gave it a go in British and Stephen Falk liked it. It was a real example of, when it comes to auditions, just being brave enough to try something even if you fall on your face. I’m lucky in this case I didn’t.

Have you ever considered why Americans find English people charming even when they are being dicks?

I haven’t! I was on Chelsea recently and she said that. I said, really? Swear words are swear words, but it seems like we get away with a little bit more. I don’t know why, it’s a mystery. But I speak for my fellow countrymen when I say that if we can keep getting away with it, we’ll keep doing it. 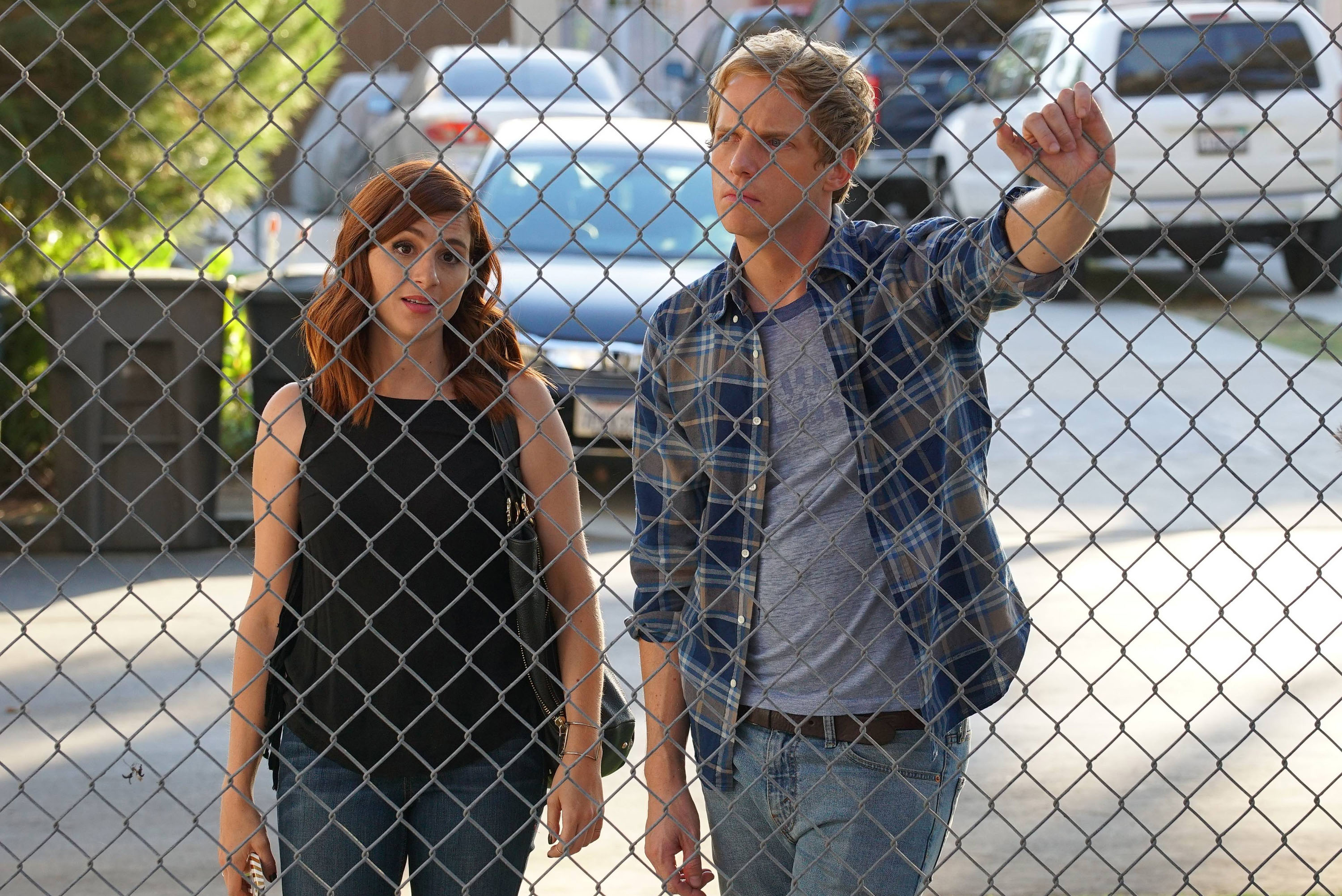 Aya Cash and Chris Geere in You’re the Worst / photo by Byron Cohen, courtesy of FXX

It’s tempting to say that You’re the Worst subverts the “will they/won’t they” formula, but really what it does is put it into a more realistic context. It becomes a question of “will they make this dysfunctional thing work, or won’t they?” Does that tension appeal to you?

Absolutely. We were told from the beginning that it won’t be a “will they/won’t they” show. They will—but how hard will it be for them to realize that? Jimmy and Gretchen are so stuck in their own ways. The penultimate episode of this season is my favorite ever. They are trying so hard and they both just give up. They’re both trying to do what they believe is right to progress in the relationship. They’ve compromised on things, collaborated on things, they’ve been against each other and tried to fix each other, they’ve dealt with depression. They believe that now they’ve done it, but they haven’t. Something else shit comes along and they ask, “Are we not doing good enough? What is it we’re not doing?”

Even though they’re intelligent people, it’s so hard for them to stop and realize, “you know what, this is it.” Look at it and enjoy it for what it is. They are always going to be each other’s worst enemy, and that’s what’s exciting. I hope they’re together forever. They’re like a married couple that isn’t married yet. And we all know—or are—people like that. Viewers enjoy our flaws because they empathize with them.

The show can be difficult to watch. This season we saw your character struggling with grief. In the past, Aya’s character had a bout of clinical depression. There’s been PTSD, and this season, moments of remarkable and unexpected violence.

Sometimes [we explore] extreme situations, as with life. Yes, people aren’t doing what Lindsay does every day, but why should we ignore things like that just because we’re a comedy? Stephen is so brave with his storylines and I love it.

“Jimmy’s not a bad person, he’s just a bit of an idiot sometimes.”

In season one, I was worried about being disliked by the audience. I was worried about Jimmy being an asshole, and he does come across as an asshole sometimes. But that gives us all—the characters and the audience—somewhere to go. As the show goes on you realize why he does what he does. He’s not a bad person, he’s just a bit of an idiot sometimes.

Do you ever worry that even on a show called You’re the Worst, you could push the characters so far the audience won’t go along?

All of us get like, “how’s this going to go down?” Stephen knows what’s going to happen at the end, but he won’t tell us. But there have been a couple of times this year where I’ve thought, “I don’t think I can be supportive of that anymore.” Knowing the writers, [though,] I know there will be a just solution to all of this. I’m excited to see where it goes.

I mean, if all four of us turn into mass murderers, it won’t be an enjoyable comedy anymore, but it’s exciting to see whether there’s repercussions for all these actions and how it affects these characters individually.

Do you have a sense of where things are going next?

It’s a cliffhanger. I have no idea where we’re going to go.

One of the things I like about the show is that it doesn’t tell us why the characters are so flawed, it shows us. Does that feel more true to life to you?

I know I’m in the show, but I find it interesting as a viewer. You get frustrated with the characters because they don’t get it; I love that about Jimmy and Gretchen. Sometimes they realize things about each other and themselves that are really inspiring and that take them to the next stage of their relationship, and then there are other instances where they’re like, “What are you doing? Why are you doing that now?”

Hopefully the show will run and run and run and we’ll finish [when it’s right]. I don’t think Stephen would ever want to do more than six seasons; we’re not going to do what some shows do and drag it out. The fans I hear from and speak to want to know what happens next. They want answers for all these things. That’s what makes a good TV show I suppose. FL