On their covers LP, Morrissey & White stand shoulder to shoulder with classics from Sinatra & Hazlewood and Sonny & Cher.
Menu

On their covers LP, Morrissey & White stand shoulder to shoulder with classics from Sinatra & Hazlewood and Sonny & Cher. 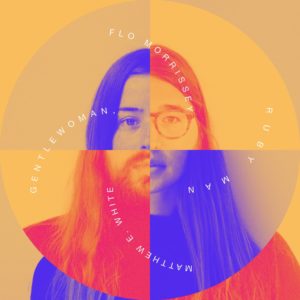 Anyone understandably hesitant about jumping headfirst into 2017 might do well to check out Gentlewoman, Ruby Man. The joint effort of UK singer-songwriter Flo Morrissey and Virginia’s own Matthew E. White is an album of mostly recognizable covers, making it a good bridge between last year and this one. If you need something familiar, this will be more than sufficient.

The two met at a Lee Hazlewood tribute—Hazlewood, of course, was well known for his duets with Nancy Sinatra—where they sang “Some Velvet Morning” (also done expertly, once upon a time, by Lydia Lunch and Rowland S. Howard).

You’re in good hands with these interpreters. These are soft, funky reimaginings, not total reinventions that’ll leave you unmoored. And where White has compared his own voice to that of Lou Reed, saying that they’re both not the most vocally gifted people around, Morrissey picks up the slack and then some. She carries “The Colour in Anything,” a James Blake song, and, interestingly enough, handles the Reed vocals on a cover of The Velvet Underground’s “Sunday Morning.” But White’s being a little hard on himself; like Reed before him, he knows just what to do with his unique voice to make it something special (see their cover of Leonard Cohen’s “Suzanne”). Mega-famous songs (“Grease,” from, uh, Grease) live alongside lesser-known ones (Little Wings’ “Look at What the Light Did Now,” a highlight). And between the guitar work and Morrissey’s voice, their version of Frank Ocean’s “Thinkin Bout You” is just beautiful.

So yes, Gentlewoman, Ruby Man is another covers album by two musicians—one female, one male, in the vein of Sonny & Cher or Hazlewood & Sinatra. That’s what inspired White to propose the project to Morrissey. Their exquisite pairing, along with the carefully selected material and White’s excellent arrangements and production, results in this album standing shoulder to shoulder with the aforementioned classics.