“The Dollop”’s Dave Anthony gives us the inside scoop for this year’s fest.
Menu

“The Dollop”’s Dave Anthony gives us the inside scoop for this year’s fest.

“Alternate facts.” “Fake news.” Such oxymoronic, stomach-turning Trumpisms have penetrated the American lexicon, to the chagrin of rationally minded people. But this year’s Los Angeles Podcast Festival will aim to combat those dangerous misnomers by honing in on a more verifiable, time-tested term: “truth.”

Festival founders Dave Anthony, Graham Elwood, and Chris Mancini have cemented truth as the overarching theme for this year’s installment, which will be held at the Millennium Biltmore Hotel in downtown Los Angeles on October 6, 7, and 8. It will be highlighted by live tapings of podcasts including WTF with Marc Maron, My Favorite Murder, and Ca$hing in With T.J. Miller.

The lineup will also feature festival stalwarts The Dollop (co-hosted by Anthony) and Comedy Film Nerds (co-hosted by Elwood and Mancini). Rounding out the initial bill are The Jackie and Laurie Show, The Dork Forest, Bertcast, We Hate Movies, and The Mental Illness Happy Hour.

“[There are] many more to come,” says Anthony, who helped launch the festival in Santa Monica in 2012. 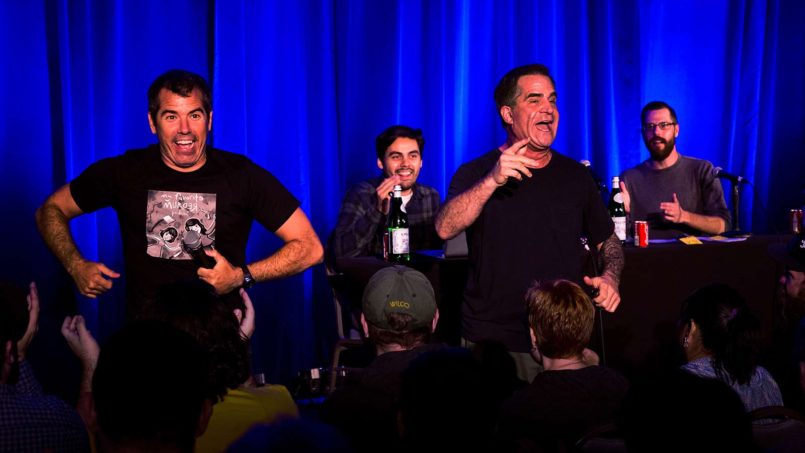 In addition to the tapings, this year’s iteration will also include panels, conversations, and the return of the Podcast Lab, where podcasters who bring their own equipment can tape their own shows.

A new addition to this year’s program is “Podcast Pros,” which will help prospective and burgeoning podcasters learn best practices and underscore the social element of the podcast industry.

“We’ve all sat through way too many boring panels at conferences. We’re going to offer something for people aspiring to get into podcasting, people who want to grow their podcasts, and people who are established in the industry,” Anthony says. “Most of all, we’re going to keep the environments intimate so people can really connect.… The big thing for us is that we’re planning on keeping it all entertaining.”

Anthony notes that the LA Podcast Festival is the only event that unites podcasters with fans as well as the industry. He is confident that participating podcasts will embrace the “truth” theme.

“Political podcasts have shot up the ranks to the top ten because people are looking for the truth—the truth that you don’t find on cable news.” — Dave Anthony

“With what’s going on in the country, it hits at the heart of podcasts,” he says of the theme. “Podcasts started as an end around show business for comedians. That led to people hearing a lot more of the truth about show business and what comedians think than they every had before. And as content has changed in podcasts and moved away from conversations, there is a search for the truth in all areas.”

He continues: “If you listen to podcasts now, you’ll hear they’ve already been trending in that direction for a while. And political podcasts have shot up the ranks to the top ten because people are looking for the truth—the truth that you don’t find on cable news.”

“I don’t like hotels that put a member of our community’s safety at risk,” he says. “The Sofitel I always felt was a stale environment. It’s very standard trying-to-be-cool Los Angeles.”

The Biltmore, on the other hand, “is rich in history. It’s where the first couple of Academy [Awards] took place, [and it has] an old tunnel behind a secret door that goes from one of the ballrooms out to the street. We really want to showcase podcasting in these beautiful and historic spaces. When it was built in 1923, the hotel had the latest technology at the time—radio hookups in every room—so it feels right.”

“Podcasting [doesn’t] wanna be [chic],” Anthony adds. “It’s sometimes gritty, sometimes weird, always real. That’s the Biltmore. It has always been my first choice to host the festival and I’m glad we’re finally getting the opportunity to do it there.”

Despite last year’s subpar venue, the festival certainly had its moments. Anne Litt of local NPR affiliate KCRW guested Bill Hader for the first-ever live taping of its Guest DJ Project, in which comics, actors, and chefs drop by to talk about songs that influenced their careers. Additionally, the festival marked the debut of Everything’s Coming Up Podcast!, in which  Allie Goertz and Julia Prescott chat up their favorite writers and comics about The Simpsons.

Meanwhile, The Dollop—which typically revolves around Anthony telling a story about US history to his buddy Gareth Reynolds—invited My Favorite Murder’s Karen Kilgariff and Georgia Hardstark for a lively, seventy-five-minute-long talk about shark attacks along the New Jersey Shore in 1916.

My Favorite Murder also taped its first-ever live broadcast at the festival, and returned the Dollop favor by welcoming Anthony to talk about a serial killer who stalked women on hiking trails and the kidnappings and murders of young boys in LA in the 1920s. Beyond the live podcast recordings, the festival included parties and the podcasting lab, where T.J. Miller made a surprise appearance to spread the rumor that Christian Bale “killed a horse with his dick.” It also featured a snazzy Snapchat filter and a live stream for out-of-towners or extra-lazy locals who couldn’t make the trek.

Guests abounded elsewhere at the 2016 festival, with the colorful Aussie Tim Minchin sitting down for an in-depth interview with Stuart Goldsmith for his show The Comedian’s Comedian; Anthony intro’ing Point vs. Point, which also features Reynolds; alt-comedy legend and cancer survivor Greg Behrendt, who rejoined Anthony for a revival of their defunct (and sorely missed) Walking the Room podcast; Elwood TOFOP-ing with Anderson; comic Nikki Glaser talking up Fitzsimmons; babies going gaga for Pardo during his Never Not Funny broadcast; and actor David Harbour of Stranger Things dropping by Pollak’s festival-closing show.

You can expect a similar fleet of big-name comedians and actors to surface at this year’s edition. It’ll also be fair to anticipate that some of them will throw down at the All-Star Stand Up Comedy Podsmash, the festival-closing showcase that is making its return.

Also, as with virtually any public performance by an entertainer in 2017, expect plenty of riffage on a certain peculiarly coiffed Manhattanite named Donald John Trump. Naturally, he is the motivation behind this year’s “truth” theme.

When asked if the topic was chosen in response to the Trump Administration’s attempts to obfuscate the meaning of truth, Anthony responded with an unwavering “yes.”

“It’s definitely about Trump,” he said. “What isn’t these days?” FL

The Los Angeles Podcast Festival goes down October 6 through 8 at the Biltmore Hotel. Click for tickets and more info.