Is this J. Tillman at his most ironic, or his most sincere?
Menu

Is this J. Tillman at his most ironic, or his most sincere? 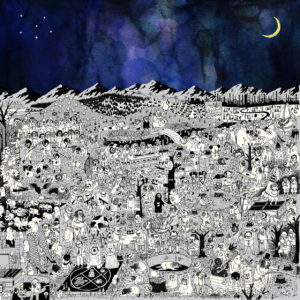 With his latest release, Tillman has delved deeper into his Father John Misty persona, bypassing cheeky antics and heading straight for existential contemplation. Pure Comedy is a marked shift from 2015’s deeply personal and romantic I Love You, Honeybear and the wacked-out world of Fear Fun, his 2012 debut. Now more than ever, Tillman’s gaze is directed outward at a global level. If you took all of his impromptu onstage rants, every antagonistic promotional outing, every sarcastic tweet, and set it to music, you would have all seventy-plus minutes of Pure Comedy.

In length and composition, Tillman is aiming for the stars here; nearly every song is a drawn-out battle between the songwriter and the looming onset of exhaustion. The instrumentation of piano and solitary guitars is relatively minimal, a blank canvas for his meandering anthems. The album reaches its emotional peak with the thirteen-minute ballad “Leaving LA,” which features the most prophetic writing Tillman has ever produced: “I’m beginning to begin to see the end / Of how it all goes down between me and them / Some ten-verse chorus-less diatribe / Plays as they all jump ship / ‘I used to like this guy / This new shit really kinda makes me wanna die.’”

“Total Entertainment Forever” is, unironically, the most exciting bit off the record, pumped full of jazzy saxophone and pianos in full swing that recall the mariachi flare of “Chateau Lobby #4 (in C for Two Virgins)” off of I Love You, Honeybear. With an opening line like “Bedding Taylor Swift / Every night inside the Oculus Rift,” this is Tillman sensationalism at its finest. It sticks in your craw at first listen, but why does he find it so necessary to objectify Swift by name, while the generic white guys of indie and pop who he constantly maligns remain vague and nameless? Somehow Tillman can paint a lurid picture of Swift without suffering the same fallout as someone like Kanye West, who blatantly name-dropped her last year in “Famous.” Both men are projecting a hypothetical fantasy of sex with Swift, but perhaps it’s West’s presumption that he “made that bitch famous” that gets under your skin the most. Tillman is speaking to the public’s obsession with someone as unattainable as America’s Sweetheart and the terrifying reality that modern technology could make someone like Swift available to the masses (with or without her consent).

Pure Comedy is the third act of Father John Misty the character. Fear Fun introduced the world to an ayahuasca-tripping, graveyard-dwelling weirdo living out in Topanga Canyon, I Love You, Honeybear brought us the lover in the midst of newlywed bliss, and now we have the bitter old man living out his days shaking his fist at “LA phonies and their bullshit bands.” The fun is gone, but the comedy is still there—this time it’s just at all of our expense. We can laugh at Tillman’s mockery of “woman-hating epileptics,” “demented monkeys,” “false feminists,” or “homophobes, hipsters, and 1 percent,” but the mirror he’s holding up is pointed right at our faces.

The question now is, after attempting to tackle the finer points of the human condition in just over an hour, where does J. Tillman go from here?