Three Millennia and Counting: The Return of “Mystery Science Theater 3000”

It’s no mystery. It’s not rocket science. It only looks like it.
Menu

It’s no mystery. It’s not rocket science. It only looks like it.

The end of the ’80s gave birth to a lot of silly things: the Bush Dynasty, JNCO Jeans, the Insane Clown Posse, and Michael Keaton as Batman amongst them. Who knew that “the not-too-distant-future”—and a snarky one at that—commenced at the same time, in the distant land of Minnesota, on a UHF channel serving greater Minneapolis and Saint Paul?

It’s here, at the Gizmonic Institute’s super-secret Deep 13 underground lab, where two evil scientists tossed janitor Joel Robinson into space via the dog bone–shaped Satellite of Love capsule. Joel’s mission? To view countless D-level movies in order to find the best (or worst?) so that the mad docs could forge its strength in building a weapon of mass destruction—campy delight free of saccharine sentiment being a fortunate byproduct. As no man is an island, and no truly bad movie is worth viewing without a crowd to razz it, the handy Joel built robots from his rocket’s existing parts to be his viewing partners. Now, with the companionship of the ’bots—Tom Servo, Crow T. Robot, Gypsy, and several others—Joel could enjoy-by-not-enjoying the movies he was forced to watch, cracking wise with his pals while the films unfurled in order to maintain their sanity.

That’s Mystery Science Theater 3000 (or MST3K), the smartly comic television program whose characters are seen in silhouette as they riff through more pop-cultural references than Dennis Miller on meth. Created by standup Joel Hodgson, who played the janitor from 1988 to 1993 (when head writer Michael J. Nelson took over), MST3K jumped from Minneapolis’s KTMA to the nascent Comedy Central, and finally to the Sci-Fi Channel, where in 1999 it logged off and away for good. Until now, that is: A rebooted version of the show had made its way into our galaxy via Netflix.

Hodgson, now fifty-seven, was raised on the films that MST3K made fun of: think tacky, grainy UHF culture and local pre-cable programming where farm shows, awkward children’s hosts, educational info-movies, and flying-saucer flicks intermingled every midnight. While the angle of approach is still thrilling, younger viewers might need a glossary to follow along. “That’s why we wanted to refresh the brand [for a new generation], because all of my references are from [a bygone] time,” Hodgson says.

That time might as well be a past life. Somewhat infamous for being an in-demand Los Angeles comic who turned down a Michael J. Fox sitcom because he just wasn’t feeling it, Hodgson left LA in the mid-’80s and receded to his Midwestern roots to psychically regroup before he wound up at KTMA. “I was doing standup on Letterman and Saturday Night Live, but there had to be something more,” he says. He had the idea of people looking, laughing, and comically commenting on movies while in high school, and the concept of local “monster movie hosts” appealed to him, too. The notion of using cheesy public domain films as his fodder came later, however, and by his time in Minneapolis it became a fiscal necessity. “Being inexpensive made it feasible for those who might back it—that and making sure the found-object robots I built were easy and cheap to make.” 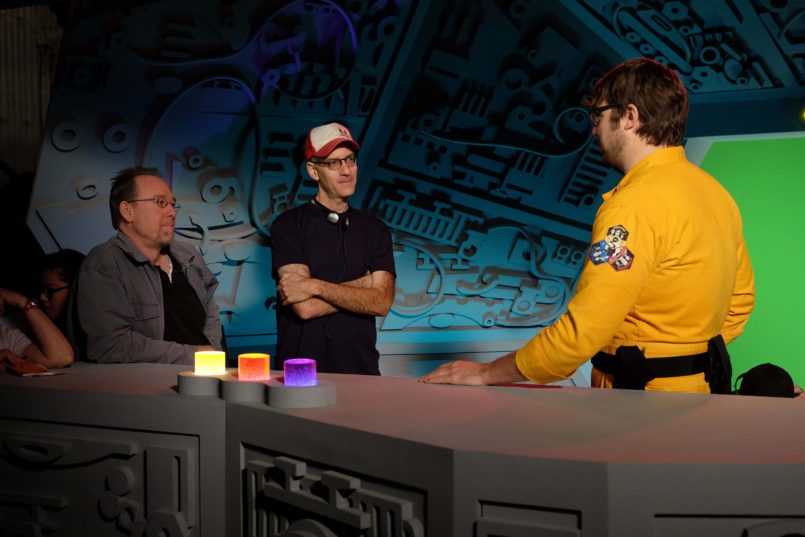 MST3K has returned in 2017 with its traditions intact and its snark at full blast. “The only real difference between the original and the new one is that it’s faster,” says Hodgson. That and one other thing: “I think the idea [when we decided to bring the show back was that it] would have to be like James Bond… [The host has] to have nerd sex appeal—as well as be able to riff and collaborate with the movie you’re screening.”

“The whole thing still feels nuts to me,” says sexually appealing nerd Jonah Ray, who, in addition to playing the role of the new host—Jonah Heston—on the rebooted MST3K, also co-hosts the Nerdist podcast with Chris Hardwick and Matt Mira. “I mean, I’m one of three, not one of a hundred. More people have played Doctor Who and Spider-Man than the janitor.”

“I’m one of three, not one of a hundred. More people have played Doctor Who and Spider-Man than the janitor.” — Jonah Ray

Ray was handpicked by Hodgson himself in 2015 after the creator was on the Nerdist program a few years prior, but the Hawaiian-born comedian was a fan of the original MST3K as soon as it hit Kailua. “Most of my responses to people in daily life still come from the Mystery Science Theater movie that came out in ’96,” he says. “I named the comedy albums I’ve created after [the show’s] best lines. I say things from that show when I pee. Before all that, [though,] I remember just turning on Comedy Central when it was getting started, and there was this weird, old, cheesy movie on, and I thought, ‘Nooooooooooo!’ It only got worse when I thought the TV was broken because there was all this talking over the film. Then I realized there was someone talking to space robots. Now I’m enthralled.”

For Ray, the ad-hoc sound and vision of MST3K was not unlike the old Hollywood axiom of putting on a show in the barn—only, in space. “Like the punk rock that I loved, Hodgson’s production was very DIY,” Ray says. “It was attainable. It looked like something I could do or piece together; even the comedy seemed attainable, because that’s how I spoke and joked.”

The Yale School of Drama–trained Bill Corbett, one of MST3K’s central writers and one of the voices of Crow T. Robot (“Crow’s one of the greatest dramatic characters in history,” he quips) is also involved with the new iteration of the show and is convinced that the sandpaper-dry Ray is a fine match for Hodgson’s equally cool-witted janitor. “Jonah is an elegant fit,” he says. “[The original] came from a different culture altogether, though: different references, a different pace.” 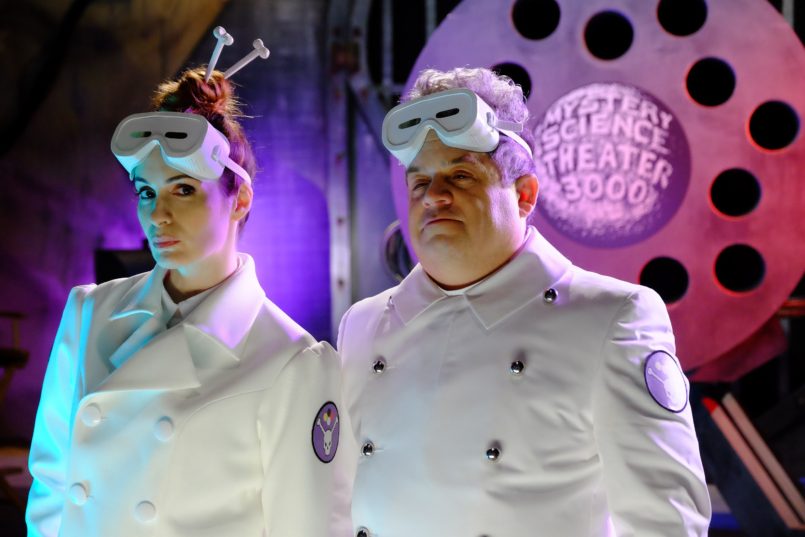 Mary Jo Pehl, another one of the central writers—and voice of several MST3K characters—has also returned. “I had to,” she laughs. “Remembering the writers’ room sessions—and that we all had healthy egos—I couldn’t help but be curious as to how this one would be written. Plus I wanted to see how the new janitor worked out; Joel’s [version] was the ultimate everyman.” Yet as someone who has never strayed far from Hodgson (she was part of his Cinematic Titanic film-riff series for six years), she’s hardly an impartial judge. “I like my humor fast and furious. Joel and I knew each other originally from the old Los Angeles sketch comedy scene, and we have a deep and abiding love for old, bad movies.”

That seems to be the way it worked for devotees of the old show, including Hampton Yount and Baron Vaughn (who now play Crow and Tom, respectively), Felicia Day (the new mad scientist Kinga Forrester), and Patton Oswalt (the confusingly named TV’s Son of TV’s Frank). Vaughn was immersed in the concept of three robots and their janitor pal joking around—“only I was riffing along with them at home,” he says. “They were saying the things I would say. I was saying the things they would say.”

“When MST3K would run the audience’s photos and letters, that really gave voice to its viewers; it was so ahead of its time.” — Felicia Day

Like Hodgson, the inventive Day (who was the creator, writer, and star of web series The Guild, which explored gaming subcultures) is someone with a personal obsession who made it work in a marketplace in need of something bold. “I told Joel when I met him that I thought MST3K was an interactive-viewing Internet show before the Internet,” she says. “When MST3K would run the audience’s photos and letters, that really gave voice to its viewers; it was so ahead of its time. My brother and I felt very close to that show. We would project ourselves into it, feel a part of it, and perform commentary along with the robots. That sort of comedy is [now] the most prevalent form of humor because of the Internet’s sense of participation.

“I’m on the new MST3K because my brother loved this show almost as much as me,” she says. “My fandom got me the job. I was at a convention that Joel was part of, and I needed to get a selfie of him with me for my brother. We got to talking—Joel has a real feeling for fellow performers and he knows his show—and the next thing you know I’m next to Jonah Ray, who fits that janitor jumpsuit like a glove.”

For the laid-back Hodgson, to speak about the return of Mystery Science Theater 3000 still seems weird. “I’m just amazed that seventeen years after we stopped, people are still thinking about us,” he says. But for Jonah Ray, the new voyage is something worthy of joy: “This MST3K feels so much the same as the original. It’s wider, not redone but refreshed. You’ll be amazed.” The not-so-distant future just got a little closer. FL