On his third full-length, DeMarco pits the innately good-natured, easy-going tone of his music against a hint of sorrow in his lyrics.
Menu

On his third full-length, DeMarco pits the innately good-natured, easy-going tone of his music against a hint of sorrow in his lyrics. 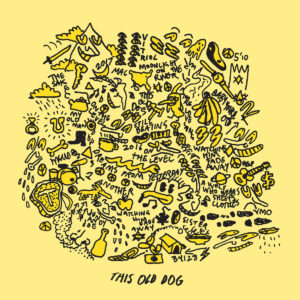 Days before the release of This Old Dog, Mac DeMarco appeared on WTF with Marc Maron and took a few minutes to talk about his musical influences. The Canadian singer/songwriter was perhaps duty bound to mention The Band, whose ragged charms, DeMarco said, always hit him right in the feels. He also noted that he was a Steely Dan man, admitting that the latter group didn’t tug at his emotions quite so much but that he nevertheless takes pleasure in their intricacy and their precision; the sensual delight implicit to their music was described by DeMarco and Maron as being almost pornographic in nature.

These two reference points might seem like an odd sort of axis upon which to chart DeMarco’s own gifts, yet it’s not impossible to hear both influences pop up on This Old Dog, his third full-length album. DeMarco recorded this one with essentially just voice, acoustic guitar, synthesizers, and drum machines—so you could just as easily liken it to the homespun vibes of early Paul McCartney solo work or even to the rigid, one-man funk of early Prince—yet the algorithmic nature of these synthetic arrangements captures some of the melodic precision that DeMarco likes in his Steely Dan. At the same time, he doesn’t allow the music to be too sterile or clinical; he goes for the feels, too, and sometimes even hits ’em.

He does it when he pits the innately good-natured, easy-going tone of his music against the hint of sorrow in his lyrics. “My Old Man” opens with a reference to looking in the mirror, and hinges on the phrase “I’m seeing more of my old man in me.” There are other lyrics, too, but, really, the whole story is told in that one line. You can hear it as an acknowledgement of time’s passage, or—if you know a lot about DeMarco’s own issues with his dad—an acknowledgement of some kind of original sin. That’s the dark undercurrent to a song that otherwise feels easy and breezy—DeMarco strumming and cooing, the tinny little drum machine rapping out time.

That’s sort of the aesthetic key for DeMarco’s music—how he makes smooth, unhurried compositions that mask some bite, though never quite so much that you’d call them subversive. “Baby You’re Out” has a jaunty rhythm and an admonition not to spend too much time thinking about “the way things could have been.” And “Still Beating” has the kind of lazy gait that could almost pass for a Jimmy Buffett song, while the lyric pledges unrequited love.

There’s not really a lot to these lyrics, which walk the line between being frustratingly skimpy and admirably economical. The feelings are more important than the actual narratives, perhaps, so maybe it’s not surprising that some of the standouts are the songs where DeMarco commits to melancholy a little more completely. Barely over a minute long, “Sister” sounds hushed and haunted. “Turns out not every dog has his day,” DeMarco sings, and you almost wish he’d just leave it at that. It’s wonderfully precise—and pretty emotional, too.