An exhilarating journey into one of contemporary music’s most inventive and eccentric bands.
Menu

Reviews
Can, “The Singles”

An exhilarating journey into one of contemporary music’s most inventive and eccentric bands. 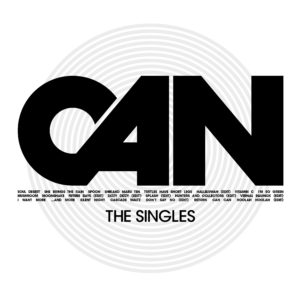 Can were never really a singles band. Rather, the influential German group defined themselves more broadly, their experiments with sound and genres taking place over the length of entire sides of albums. Take, for instance, their third full-length, 1971’s Tago Mago—a free-flowing blast of exuberant exhibitionism that veers wildly from unexpected place to unexpected place, the band finding comfort by refusing to stay within sight of any comfort zones.

There were no conventions to be found within the grooves of the LPs (save the ones they were breaking), which is something that extends to the construction of this new release, too. One of two songs from Tago Mago here is “Halleluhwah,” which on the album ran to a length of nearly nineteen minutes; here it appears the way it appeared as the B-side to non-album single “Turtles Have Short Legs” (also featured in this set), with fifteen or so minutes shaved off its length. Yet, somehow, it works—the song’s jittery, juddering, almost tribal drums clatter with purpose and immediacy. The exploratory nature of the original is still present, but you’d never imagine this was just a fragment of a whole; rather, it sounds like the best song The Rapture never wrote—an angular and skittish track that’s nearly as perfect in its truncated state as it is in its original form.

It’s precisely that versatility and adaptability, and the originality that binds the songs together, that makes this collection such an unlikely success. Compiled somewhat chronologically, The Singles works both as a bite-sized introduction for those unfamiliar with the band and as a handy addendum to the band’s established repertoire. And while they were always more interested in the avant-garde than the world of pop, there are numerous moments of unrestrained, catchy genius here: the droney insistence and unsettling yelps of “Soul Desert,” the somber jazziness and gloomy romanticism of “She Brings the Rain,” the jittery and dreamy psychedelia of “Spoon.”

Elsewhere, “Vitamin C” is a minimalistic experiment in tone and melody that’s as fun as any song on the charts today, “Dizzy Dizzy” is a playful but sinister tune that pits discord against melody, and “Silent Night” is an upbeat, whimsical instrumental version of the Christmas classic that shouldn’t work but manages to bypass its inherent kitschiness to become a wholly enjoyable—if thoroughly ridiculous—reinterpretation.

It all makes for an exhilarating journey into one of contemporary music’s most inventive and eccentric bands—one which manages to challenge the received wisdom about who they were and what they were capable of while simultaneously confirming it.