Headliners were a story, as always, but they weren’t the story out of the fest’s inaugural three-day run at Expo Park.
Menu

Headliners were a story, as always, but they weren’t the story out of the fest’s inaugural three-day run at Expo Park.

In addition to our FLOOD Festival Guide presented by Toyota C-HR—which is available for download now—FLOOD will be at all this year’s best festivals to provide you with firsthand reports from the scene.

The best moment of FYF 2017 was also the most talked about: Hair still immaculately tussled from his weird visit to the White Sands, Brad Pitt showed up during Frank Ocean’s headlining Saturday set to take a phone call. Spike Jonze filmed it. The Sandiest of Gs, Alex, played guitar.

Besides being as surreal and captivating a moment as you’re going to get in any type of concert no matter what the circumstance, it was especially effective coming during FYF’s first year as a three-day festival—and first year truly going toe-to-toe with Coachella in a dogfight to become The Festival Experience of Choice ™ in Southern California. Coachella’s biggest issue over the years has become an overwhelming crowd vanity—a feeling that being at the festival is more of a social event than a musical one—and, to this point, that wouldn’t be a fair criticism of FYF. But with a new era of growth kicking in, it was something to keep an eye on all weekend. 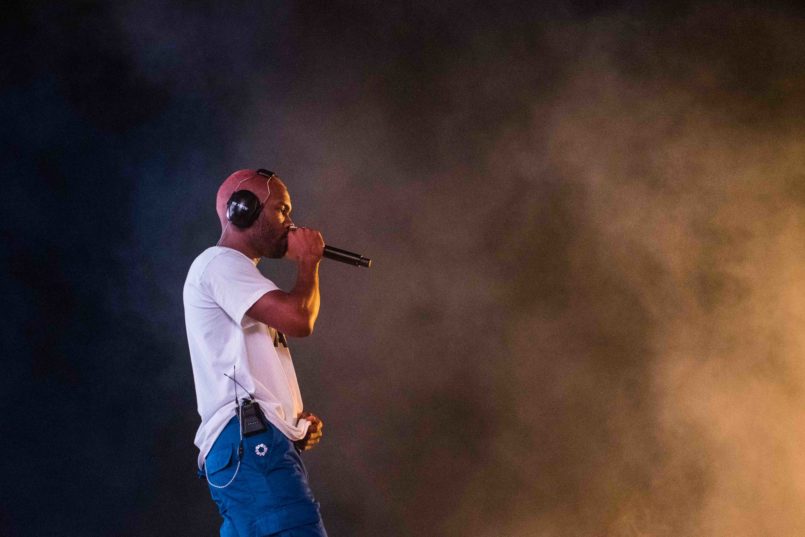 And, on paper, what could be more vain than having a Brad Pitt cameo in your set? Ocean seemed to get what he was up against, so he enlisted the most comically large name in Hollywood (who just happens to be a big fan) for a mini-piece of performance art that felt like a satire on the festival experience at large. Do we pay hundreds of dollars just to watch on the monitors from a football field away simply because Blonde is a modern masterpiece? (We do.) Or is it because we want to have it affirmed that the Kardashians, standing backstage, think so as well?

At Coachella, it’s clearly becoming more and more the latter, but it’s harder to say with FYF partially because of the way that the lineup is curated with a deliberately indie sheen, and partially because of the type of celebrity actually backstage at Expo Park. For two of the weekend’s best sets, for example, it was none other than Henry Rollins losing it off to the side—first at Ty Segall and then at Iggy Pop. Rollins is a tough cookie to crack, but he is definitely not there for the photo op, that’s for sure. 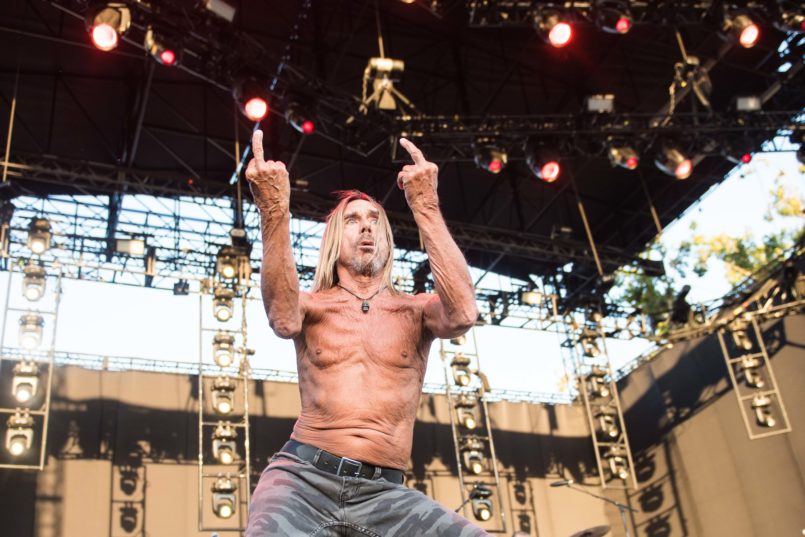 That one-two Sunday punch of Ty and Iggy on the Lawn Stage was not an accident scheduling-wise, and seeing Rollins bridge the two with his headbanging was a surprisingly sweet gesture. Segall didn’t take the symbolism for granted either. When he wasn’t busy tearing through the heaviest cuts on his latest self-titled LP, the only two things he said to the crowd were “Wear sunscreen” and “It’s an honor to share the same stage as Iggy Pop.”

He wasn’t kidding. At age seventy, Iggy blew the damn doors off, charging out onstage with that demented prance thing that he does, shaking his crooked, Kuato-looking body in ways that seemed borderline impossible considering his track record. It was a no-nonsense setlist (“I Wanna Be Your Dog” into “Gimme Danger” just to start was worth the price of the weekend admission alone), with Iggy’s band taking orders to move fast and play faster. “Go, cocksucker!” he yelled when there was a brief lull, and everyone in the audience listened, too. He may cover himself with water instead of peanut butter these days, but Iggy in 2017 felt as holy as ever. 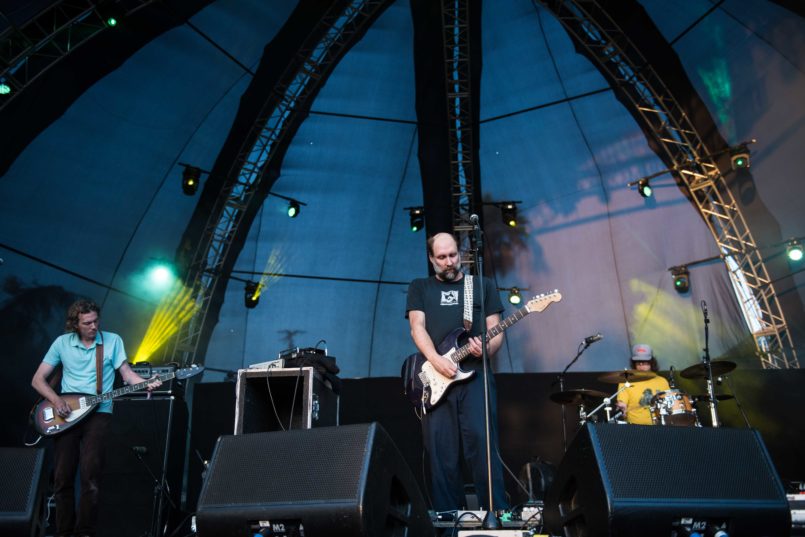 And he wasn’t the only veteran pulling their weight. Slowdive’s Friday night set proved to be as bafflingly on-point as their recent comeback record, with the band’s harmonies floating across the Trees Stage in an almost suspiciously impeccable manner. At one point, someone in the crowd yelled for more reverb, and Rachel Goswell smiled and said, “Never enough, huh? We do our best.” Seventeen years later, and their best is still something to behold. Sean Connery would approve.

On the same stage the next day, Built to Spill continued with the ’90s nostalgia by tackling the post–Marquee Moon masterpiece Keep It Like a Secret in its entirety. (The band was filling in for Grandaddy, who had to drop out following the sudden death of their bassist, Kevin Garcia.) Before even going on stage, they were basically guaranteed a perfect setlist, and Doug Martsch made the most of it, even if that meant that he had to play all the guitar parts himself (for whatever reason, the current lineup of BTS is a power trio, which is a situation that should really be remedied as soon as possible). Martsch was, as usual, all business/no talk, but hearing him ask, with renewed meaning, “What hasn’t changed for you?” from “Sidewalk,” was all the talk anyone could ever ask for. 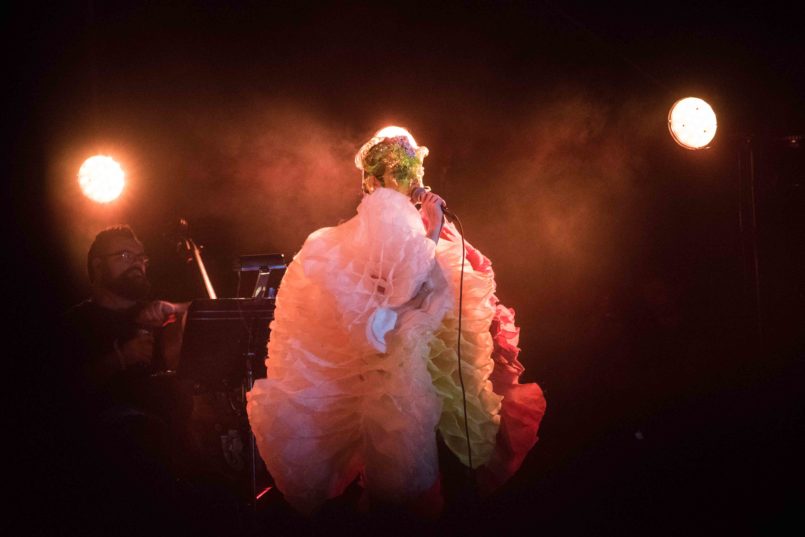 A lot of those pre-headlining sets ended up being where the real value of the festival lied. Early in each day, little sound issues seemed to pop up (which was a particular problem for Big Thief, unfortunately) and the sun did its best to melt away Cherry Glazerr (though they fought back, to be sure). But by six or seven, everything tended to fall into place. Angel Olsen’s sunset performance on Friday was a stunner, and what may be one of A Tribe Called Quest’s last shows ever was a more than worthy sendoff to the dearly departed Phife Dawg.

Truthfully, by the end of each night, it was difficult for the headliners to top what had come before them. Björk’s experimentalism couldn’t be appreciated through the chatter of thousands, and Missy Elliott’s return relied too hard on a hype man and old music video clips. By the end, Nine Inch Nails were stuck playing to an exhausted crowd on Sunday night that was surprisingly unengaged. Except, of course, when they played “Head Like a Hole.” That tore everyone in the Los Angeles County area a new one.

All this is to say, it was a very un-Coachella experience at FYF 2017. Madonna did not make out with someone. The Smiths didn’t reunite. There wasn’t a Johnny Cash hologram when NIN played “Hurt.” Rather, the best moments were sprinkled throughout. Well, that, and when Lt. Aldo Raine showed up to make a phone call. Shouts out to Frankie Ocean for also playing an actual set of—what do you call it—music for an hour-plus, but it’s hard to get past the spectacle on this one. And kudos to him for pulling that off. His skill across all aspects of art and performance have just continued to get more mythical as time goes on. So much so, in fact, that at the end of his set, when he played “Futura Free” and sang, “I’m just a guy / I’m not a God,” it was hard to buy his reassurance. Because if God is real, it’s safe to assume that he has Brad Pitt on speed-dial. FL

The Drums / photo by Adam Maresca