A Tale of Two Festivals at Voodoo 2017

There’s a lot to take in at New Orleans’ ~sPoOkY~ Halloween carnival. And a lot of choices to make about what the festival means to you.
Menu

Events
A Tale of Two Festivals at Voodoo 2017

There’s a lot to take in at New Orleans’ ~sPoOkY~ Halloween carnival. And a lot of choices to make about what the festival means to you.

In addition to our FLOOD Festival Guide presented by Toyota C-HR—which is available for download now—FLOOD is at all this year’s best festivals to provide you with firsthand reports from the scene.

To better understand the Voodoo Music + Arts Experience, one must know there’s a stage people never leave. If they could live there, they would. They enter, are consumed by a mass of inflatable T-Rex costumes and spandex Deadpools with Hello Kitty backpacks, and are never seen again. The Le Plur stage—Voodoo’s twenty-first century homage to the days of New Orleans’ legendary rave culture in the 1990s—is the festival’s EDM and DJs-only stage, a round-the-clock bass drop totally removed from the three other stages with ’90s alt rock bands and their spiritual successors, new wave rappers and big name headliners. Le Plur is a festival of its own with its own distinct festival culture. With Voodoo turning nineteen this year, Le Plur feels (and looks) like the independent teen to Voodoo’s now-adult landscape comfortably settling into the second year of its latest incarnation.

With a new layout and haunted Carnival aesthetic, Voodoo’s annual three-day Halloween weekend “experience” encompasses dozens of musicians, illuminated rides soundtracked to Cardi B, heavily marketed pop-up art events, giant-sized flaming prayer candles, a haunted cemetery in which dedicated actor-zombies scare the living hell out of anyone walking around them, and a weirdo sideshow culture created entirely by the fans. And it’s Halloween in New Orleans, so for every store-bought Mario and Luigi there are dozens of special effects–quality makeup jobs, goofy couples and locals-only costumes, and freaky people–watching material destined for Instagram stories. 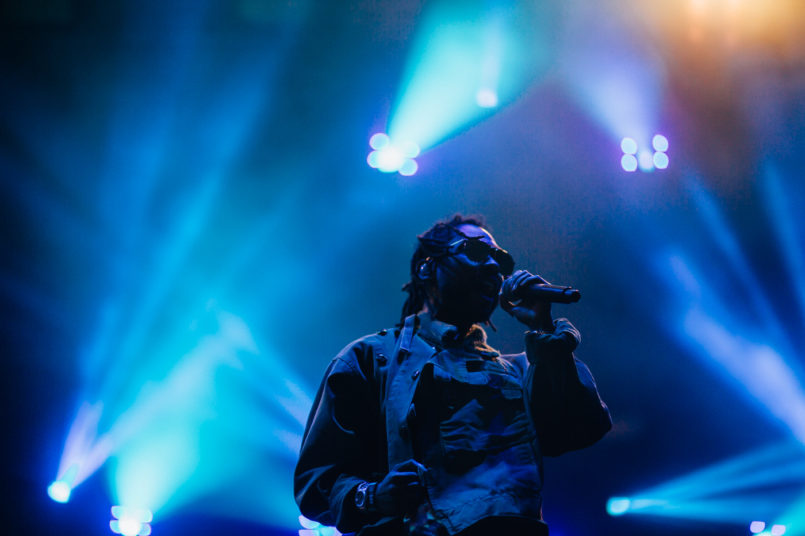 The lineup over the years has moved from Gen X mainstays with a heavy local presence to a curated grab-bag telegraphing, “This is who you should see.” Its lineup generator hasn’t settled on a specific sound, or “vibe,” or even a sense of who its audience might be distilled into a sentence. But its focus on big production values, a few big headliners, and the assurance of a few surprises has kept its young demographic through its nearly twenty-year history, and the Gen Xers who were there from the beginning keep coming back, despite the thick fog of very high young people absorbing into Le Plur’s footprint.

2017’s opening night spoiled the weekend with back-to-back performances from LCD Soundsystem—overwhelming a huge and dancing crowd with a breathless, loud hourlong set, all band members firing on all cylinders—and Kendrick Lamar, seemingly doing the same by himself.

James Murphy’s LCD Soundsystem orchestrated a fast-paced set revisiting the band’s essentials from their 2005 debut to their 2017 release American Dream, sprinting through its convulsive, addictive dance pop, committed to being the loudest set of the weekend. (It was.) 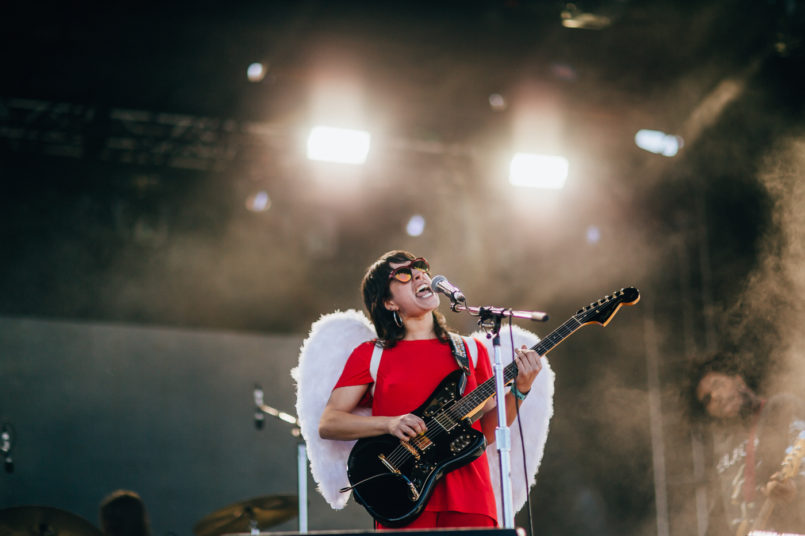 The band’s relatively last-minute late-night set in downtown New Orleans the following night diverted only slightly from the tight thirteen-song set at Voodoo, which gave ample real estate on either side of the stage for the band’s distorted projections and warped hyper-colored visions in sync with the band’s every move. After closing with a double-barreled finale of “Dance Yrself Clean” and “All My Friends,” Murphy said a brief goodbye and a “happy Halloween.”

Lamar’s closing slot was a big return to New Orleans, which was among a handful of cities on his intimate Kunta’s Groove Sessions tour following his masterful To Pimp a Butterfly, as close the audience will likely get to the rapper for a long while. But he appeared alone onstage, his band invisible to the audience, and every other word was delivered to a new set of eyes.

We were introduced to his Kung Fu Kenny persona in three vignettes, with looks cribbed from martial arts films and video games, on his quest to find the “glow hole”—a wink and a smile in the final clip broke his stone face ripping through a bulk of 2017’s DAMN. and a handful of hits from good kid, m.A.A.d city and Butterfly. 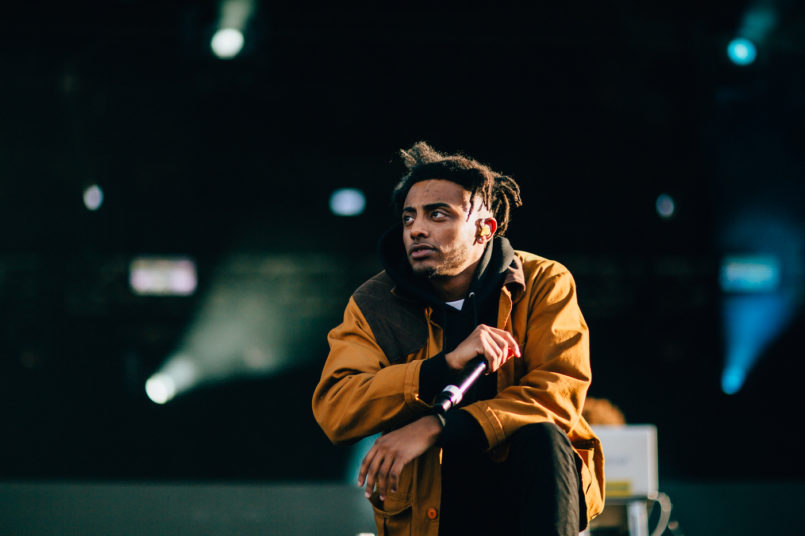 Elsewhere, former New Orleans resident Benjamin Booker proved he had shaken off the nerves when he made his Voodoo debut in 2014, breathing life into the rough-edged songs on his self-titled debut (“Wicked Waters,” “Have You Seen My Son,” “Violent Shiver”) and highlighting the blues built into his 2017 follow-up Witness.

Prophets of Rage sounded more like a Rage Against the Machine cover band than the supergroup it is—rappers Chuck D and B-Real had less success with ham-fisted Trump era burns and more while inexplicably covering House of Pain, wasting a Tom Morello reliving twenty-year-old riffs.

Meanwhile, the Le Plur bubble hosted Saturday sets from future house DJ CID and Rich Chigga with former New Orleans punks-turned-megameme producers Suicide Boys, trapping an ocean of entranced fans into the stage’s daylong party tractor beam. One gets the feeling an inflatable waving arm tube could be onstage and get the same reaction. 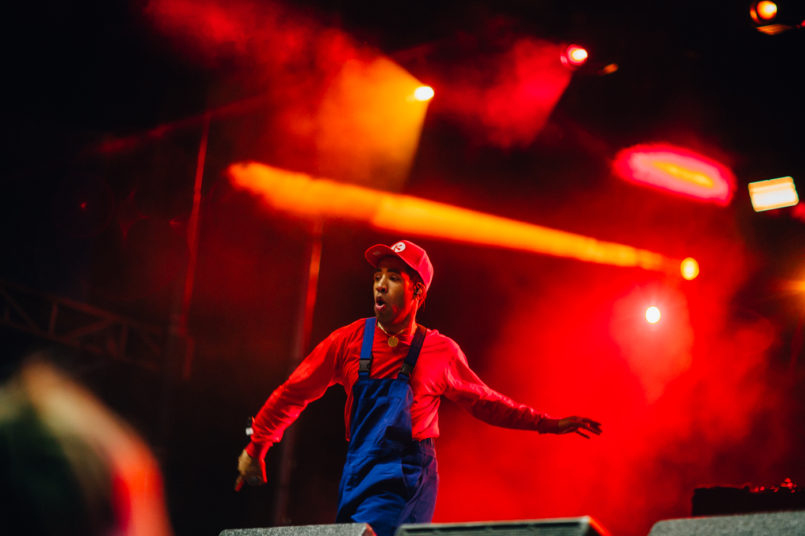 A million miles away from Le Plur, K.Flay hammered a keyboard for a heavy start in her afternoon set, and Whitney passed around a bottle of Jameson at sunset when temperatures started dropping, while the band placed covers of Neil Young’s “On the Way Home” and Bob Dylan’s “Tonight I’ll Be Staying Here With You” into its boozy, sleepy set.

Among this year’s performers holding down the last vestiges of Voodoos past when “alternative rock” reigned supreme, Live cycled through a short set of its ’90s hits (“All Over You,” “I Alone,” “Lightning Crashes”) and covers of Johnny Cash’s “I Walk the Line” and Audioslave’s “I Am the Highway” in tribute to Chris Cornell.

Sandwiched between Live and closing act Foo Fighters was Brand New, where singer Jesse Lacey admitted most of the band members “wish those were bands we were in at some point.” Brand New’s curiously moody set tore down any preconceptions of its post-emo heyday, among bands screaming too-earnest ripped-out diary pages over textbook overdriven guitars. Instead, it looked and sounded more like its heroes, emulating a dramatic quiet-loud template—retrofitted onto even its classic scream-alongs from breakout 2003 LP Deja Entendu—and thrashed across the stage and the three large Persian rugs covering it. 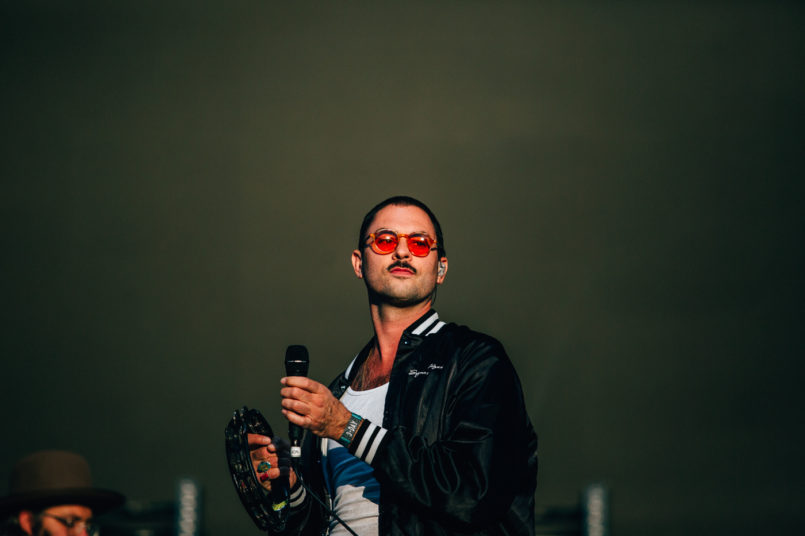 The Head and The Heart

If there was a door to the stage, Foo Fighters likely kicked it down on the way out. A band with nothing to prove anymore, or need to answer to anyone, or win anyone over, except for warming up a crowd that traded in ill-fitting Teenage Mutant Ninja Turtle onesies for bulky sweaters. “It’s fucking cold,” Grohl barked from the start. So he told them to move. He violently lurched across the stage through a tight ninety-minute rampage—hitting all the marks: new classics, new song, old classics, extended riffs, brief banter, big finish. It’s a set the band has committed to beloved memory, and it always works.

New Orleans isn’t new territory—it looms large in Foo Fighters’ Sonic Highways docuseries and in recent, three-hour-long local festival gig lore. For as distant a universe the other side of Voodoo can be, and as unpredictable as the festival can become in its next iteration, Foo Fighters are a reliable middle ground, and the closest thing Voodoo has to a classic rock band. It’s fitting they’re growing old together. FL

The Head and the Heart

The Head and the Heart