Sharon Jones & the Dap-Kings, “Soul of a Woman”

“Soul of a Woman” is full of light and hope, serving as a testament to the beauty of life—and love and friendship and all that good stuff we get to experience in our short time on this planet.
Menu

Reviews
Sharon Jones & the Dap-Kings, “Soul of a Woman”

“Soul of a Woman” is full of light and hope, serving as a testament to the beauty of life—and love and friendship and all that good stuff we get to experience in our short time on this planet. 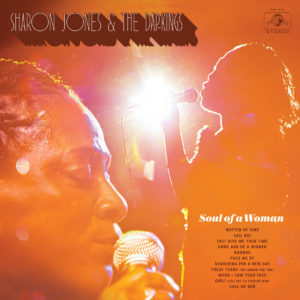 Nobody knows what happens when you die, but however spiritually inclined you are, it’s a given that you will live on in the hearts and memories of your nearest and dearest. Sometimes, though, a person’s reach extends far beyond those who knew them—they stay alive between the pages of books, in the scenes of films, and in the music they made.

When soul singer Sharon Jones died in November of last year after battling with cancer for an extended period of time, her legacy was already assured with the five original studio albums she’d recorded with her band, The Dap-Kings, since 2002. And while her illness had postponed the release of 2014’s Give the People What They Want as she underwent treatment, her deteriorating health wasn’t going to stop her recording the vocals for its follow-up.

The result is Soul of a Woman, a truly remarkable album—sumptuous soul that brims with an exuberant positivity and a joie de vivre that defies the sad circumstances of its making. That was, it turns out, a deliberate move. Initially, the plan was for the record to be a collection of sad, soft, string-laden ballads such as the forlorn majesty of new tracks “These Tears (No Longer For You)” and “Pass Me By,” but with the realization that she may not have much time left, she and her band also decided to record some more uptempo stuff.

As a general rule, those more funky songs comprise the first half of the album, while the slower, more contemplative numbers fill the second. It builds you up—notably with the defiant personal and political optimism of “Matter of Time” and the swinging, laid-back grooves of “Come and Be a Winner”—before it slowly deflates into that more melancholy mode.

But even then, songs like “When I Saw Your Face” and closer “Call on God” are far from the mournful requiems that they could so easily have been. Instead, they’re full of light and hope, serving as a testament to the beauty of life—and love and friendship and all that good stuff we get to experience in our short time on this planet—rather than ruminating on the sadness and the sorrow of death. Soul of a Woman is a heartwarming and inspiring record that cements Sharon Jones as somebody who will be remembered for many years to come—and deservedly so.