Neil Young + Promise of the Real, “The Visitor”

Shakey’s response to Trump is one that the USA desperately needs.
Menu

Reviews
Neil Young + Promise of the Real, “The Visitor”

Shakey’s response to Trump is one that the USA desperately needs. 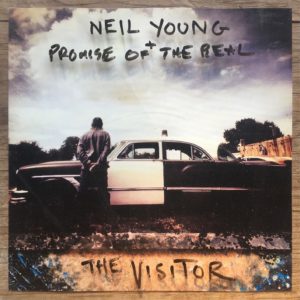 Neil Young + Promise of the Real
The Visitor
REPRISE
7/10

“I’m Canadian, by the way,” declares Neil Young on “Already Great,” “but I love the USA.” It’s the first line on the first song on The Visitor, the new album he’s made with LA band Promise of the Real, and it serves as both a disclaimer and a statement of vicious intent. For while Young might have been born across the border, he’s lived in the US for more than half a century, and the socio-political songs in his catalog have all been informed and inspired by the country he’s called home for so long.

It’s little surprise, then, given the state of the nation—and the clown currently in charge of it—that The Visitor is a bitter invective against the reality of there being a President Trump and the ideologies legitimized by his power. A gritty but melodious rumble of sluggish electric guitars and Young’s trademark off-kilter vocals, “Already Great” is, obviously, inspired by the “Make America Great Again” campaign slogan and is pointed directly at Trump. But it also praises the resilience and defiance of those standing up to him, using an adaptation of Stains’ “Born to Die”—itself repurposed as an activists’ chant as a refrain: “No wall! No ban! No fascist USA!” “Not my words,” he says in admiration over top. “That’s just you the other day out on the street.”

“Fly by Night Deal” is similarly rambunctious and revolutionary. While the music evokes the tune of “Rockin’ in the Free World,” Young waxes lyrical in a spoken-word diatribe about humanity’s lack of care for animals and the environment, while “Children of Destiny” is an uplifting call to arms to resist. It might sound like an innocuous Broadway show tune, but the message is much more dangerous. “Stand Tall,” too, is a vicious swipe at the culture of fake news—namely those on the right who use the phrase to deny the truth—and the petulant ignorance of Trump and his country’s reverence for corporate greed: “The Boy King don’t believe in science / It goes against the big money truth / His playpen is full of deniers / They’ll flush our future down the tubes.”

It’s not all vitriol, however. The gentle and forlorn “Almost Always” recalls the best of Neil Young’s more acoustic repertoire as it takes a nostalgic and breezy walk down memory lane—but with the difficulties of older age (Young is now seventy-two) and the pressures, strains, and melancholy of the political climate tagging along for the stroll. “Change of Heart” is equally graceful. It admits to the darkness—“There’s hate there now that never was”—but also offers hope for the future, however frail, fragile, and far away that might seem. Both are slivers of light, promises of a better future that offset the very necessary—and welcome—outrage coursing through the veins of this record. It makes for one of the most vital and important albums of 2017, and one that the USA desperately needs.