Alfonso Cuarón’s follow-up to “Gravity” is Netflix’s first big play for Best Picture. Its star had never acted before.
Menu

Alfonso Cuarón’s follow-up to “Gravity” is Netflix’s first big play for Best Picture. Its star had never acted before.

Yalitza Aparicio is not sure what her first name means. “I’ve had problems with my name since I was very young,” the lead actress in Alfonso Cuarón’s Roma says over the phone, speaking in Spanish.

When Aparicio’s parents tried to register her after birth, Mexican government officials initially refused to call her Yalitza, arguing that it wasn’t a common name. “My mom really loved it and my dad stuck to his guns,” she says. To date, Aparicio has only been able to find two possible definitions: “Dawn of Life,” in Nahuatl, or “Light, Power, and Imagination,” in Hindi, but she’s never met anyone fluent in these languages to ask for confirmation.

Either interpretation would be appropriate to illustrate the essence of her Oscar-worthy performance as Cleo, short for Cleodegaria, a domestic worker from an indigenous community living with an upper-middle-class family in 1970s Mexico City as she, the country, and her bosses undergo a drastic transitional period.

“Cleo is the most important person in the house,” says Marina de Tavira, also speaking in Spanish, who plays the role of Cleo’s employer Sofia—and the mother of the children that Cleo nurtures. In this love letter to joint motherhood, Cuarón drew inspiration from Libo, his beloved nanny, and the matriarchs of his upbringing.

Like Cleo, Yalitza Aparicio is a Mixteco indigenous woman; her hometown, Heroica Ciudad de Tlaxiaco, is located in the Mixteca Region of the state of Oaxaca. It’s there that Aparicio first auditioned for the life-changing part without major expectations. (She only went to the audition in the first place at the request of her sister, who was also interested in the part.) “Being an actress had never crossed my mind,” she notes. Several months went by without any word from the production.

Around the same time that Aparicio was graduating with a bachelor’s degree in early childhood education, she got a call inviting her to the capital for a meeting with Cuarón. “I had no idea who he was,” she says, laughing. Another period of time went by before she was summoned to a photo session with de Tavira, where Cuarón formally offered both women their respective roles.

“It was an exercise in being constantly present … I had to forget all that methodology to let the character be the one reacting, and just leave the actress out.”  —Marina de Tavira

“He asked us if we were willing to be a part of this project and to live this adventure, and I told him I was,” notes Aparicio. At the time, she didn’t have a teaching job yet; thus, devoting her energy to an unforeseen career detour sounded like a productive alternative.

No conventional screenplays were provided to any of the actors. Instead, Cuarón met individually with each cast member to disclose the elaborate backstories he had concocted for them, mixing memory and fiction in a variety of measures. They were all only conscious of everything that happened before the film’s opening scene; the rest would come in small increments.

“We filmed the movie in chronological order, and we would discover what was going to happen to our characters one day at a time,” explains de Tavira. Dialogue was also flexible—Cuarón would predetermine the context, but allowed the actresses to rephrase the sentiments with their own spin while upholding the desired gravitas or lightness. Collaborative magic resulted. 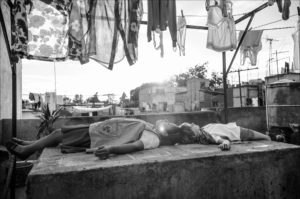 The novelty of the process demanded unrehearsed reactions, as well as the alacrity to cede control. “It was an exercise in being constantly present,” says de Tavira, for whom the experience required deconditioning from the memorization techniques typical of her work as a thespian. “I had to forget all that methodology to let the character be the one reacting, and just leave the actress out.”

Raising four kids as her marriage crumbles, Sofia’s distressing circumstances are similar to what de Tavira’s own mother withstood. “[Sofia and my mother] are women from a decade where those who had separated, or had to live in a family where the husband was no longer present, were heavily criticized by society,” she points out. “They were women who felt that the divorce was their fault, and they had to push forward carrying a social stigma.” Honoring that resilience brought personal satisfaction to the actress.

For Aparicio, the inextricable parallels linking her to Cleo run even deeper.

“Despite the many years between the period depicted in the movie and our present time,” says Aparicio, “I have experienced the same discrimination as Cleo because of the color of my skin, because of my indigenous roots, and because of my social class.” In Roma, she speaks Mixtec, the mother tongue of her people, but one that she isn’t fluent in, and had to learn through a translator.

“Despite the many years between the period depicted in the movie and our present time, I have experienced the same discrimination as Cleo because of the color of my skin, because of my indigenous roots, and because of my social class.” —Yalitza Aparicio

Growing up, Aparicio and her siblings were instilled with the notion that speaking the language could bring on more rejection. “My dad thought, ‘My children are not going to learn Mixtec because I don’t want them to experience what I already went through,’” she explains.

Lifelong prejudices toward indigenous cultures in their own homeland urged her father to suppress his identity. “When people heard him speak his native language they would dismiss him,” Aparicio says. It’s her hope that Roma ignites renewed appreciation for Mexico’s neglected linguistic history.

Yalitza Aparicio is the film’s guiding force—no small feat for an actress on her first try in any feature, but particularly so when it’s for an Oscar frontrunner. And while Roma is spun from Cuarón’s own memories, it’s where his past meets Yalitza’s present that cements the movie’s future as a masterpiece. FL