Cola Boyy Is Breaking the Rules of Dance Music

The artist born Matthew Urango is a multi-instrumentalist whose punk-rock youth led to his making spaced-out, modern disco.
Menu

Breaking
Cola Boyy Is Breaking the Rules of Dance Music

The artist born Matthew Urango is a multi-instrumentalist whose punk-rock youth led to his making spaced-out, modern disco.

BACKSTORY: A twenty-nine-year-old singer and multi-instrumentalist whose punk-rock youth led to making spaced-out, modern disco in his bedroom for Soundcloud—all while maintaining his activist political roots and living life with spina bifida
FROM: Oxnard, California
YOU MIGHT KNOW HIM FROM: If not for his pulsing 2018 single “Penny Girl,” then perhaps his contribution to Oxnard’s community-focused grassroots group Todo Poder Al Pueblo and its initiatives for immigrant rights and against police brutality
NOW: Signed to French label Record Makers, the artist born Matthew Urango dropped his debut EP, Black Boogie Neon, last year, and played Coachella 2019

Cola Boyy has no problem with you calling the music on his debut EP “disco.” Mention Cola within the rich history of genre avatars like Giorgio Moroder, Cerrone, and Nile Rodgers, and you feel him blushing across the distance between cell phone towers. But when you consider the whole of Black Boogie Neon, disco might, in fact, be too limiting a term.

“I would not say that I’m trying to perfect the genre, or even replicate it—quite the opposite—as much as I’m breaking the rules of dance music,” he says. “I’m mixing things up: disco, ’90s pop and punk rock, blurring the lines, but in a way that is tasteful and unique.”

“My teens and early twenties found me deeply involved in the punk scene in Oxnard. It shaped me. Not just the music—that scene was the first place where I was exposed to a community that I liked, who liked me, and that I wanted to be around.”

That high level of taste and panache, to say nothing of his roots in the Mexican sounds that are indigenous to Oxnard, is very much present on Cola songs like “Beige 70,” a lo-fi track as elegant as it is hypnotic. When I suggest the simplicity, repetition, and mesmerizing quality of his tracks might be connected to his youth as a Ramones fan, he brightens up: “Ooh, very much so,” he agrees. “My teens and early twenties found me deeply involved in the punk scene in Oxnard. It shaped me. Not just the music—that scene was the first place where I was exposed to a community that I liked, who liked me, and that I wanted to be around.”

Along with Oxnard’s dominant Latino population, Cola found the punk community was filled with misfits, more accepting because everyone there felt out of place. “When I was young I was bullied,” he reveals. “It turned me into a hardened person—an angry person. I needed an outlet and people to look up to and work together with in a positive way. That scene made me less of an angry person…I hope.” 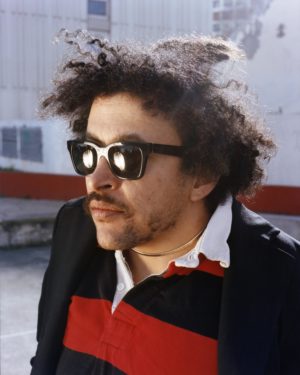 Having first written for anarchist punk acts, morphing into bedsit disco wasn’t such a stretch for Cola Boyy. At first his lyrics were hard and dark (as you can hear on the messily obsessive “Penny Girl”), but eventually they became more wry, finding both romance and inclusivity. “Beige 70,” both the song and its corresponding video, is the best example of this, as the lyrics and images remove disco’s usual sense of decadence and pleasure principles and subtly, cleverly look through the lens of inclusion at a cast of differently sized, shaped, and abled people. “Thanks for noticing, as I haven’t discussed this yet,” Urango says happily. “It’s a love song about a girl at a club whose clothes are shabby and her friends are making fun of her, but it doesn’t matter to me because she’s a star. It’s about being judged and accepted.”

That acceptance carries over into Cola’s imagined theme for his EP: a place where people who don’t fit in anywhere else are desirable and beloved. “Like the club in that video, I wanted to create an entire world within my songs where all are welcome,” he says. “I wanted disabled folks in the video along with me, but in a way that wasn’t tokenizing them or me, and that didn’t seem unreal. I didn’t want it to be tasteless or fucked up or have any weird moments for anyone. We’re normal people. It shouldn’t be weird seeing disabled people dancing and enjoying themselves.”

Ask Cola Boyy if he sees this, or any of his songs, as directly political, and he’ll reply that everything is political. “Especially in my case: Afro-Latino and disabled,” he adds. “There is a political existence and a political reaction to living this way. The songs are just my experience: love songs, with dark twists, telling of the moment I was writing them—when I was super depressed, at a difficult place with my health, and with my mortality at the forefront. I feel better now, and I am looking forward to singing about that, too.” FL