When he was weighing his musical options last year, Pink Sweat$ decided to go with the voice he heard most often: His own.

“It was like, ‘Yo, whatever it is you want to do, go for it,’” the Philadelphia-raised singer-songwriter says, and his decision to record and release music mostly featuring just his own voice and an acoustic guitar proved prescient. Released in July 2018, his stripped-down “Honesty” single logged more than two million Spotify streams in less than two months. It has more than seventy-six million Spotify streams now; and the video has nearly twenty million YouTube views.

Pink Sweat$ went with his gut and made music his way on his own terms because he didn’t want other people’s opinions and concerns to limit what he would do with his music, his life, his career.

“Those worries are so small in comparison,” he says. “It’s like, ‘Go for it. Go hard and don’t let people’s limitations be your limitations.’ I remember people being like, ‘You made your song only with guitar. I don’t see how that’s going to work.’ Then we put it out and it works. Then it became, ‘You should just stick to music. You shouldn’t try to do too many things at once.’”

Eschewing that advice, Pink Sweat$ is currently writing his own short film and is slated to appear in Spinning Gold, the forthcoming biopic of 1970s record producer Neil Bogart, co-founder of Casablanca Records. Samuel J. Jackson, Richard Dreyfuss, and Neil Patrick Harris also star in the movie, which focuses on the company that released material from Kiss, Donna Summer, Parliament, and the Village People, among others. Last month, he additionally collaborated with Pabst Blue Ribbon Sound Society to create an immersive Fearless installation in Los Angeles, where guests could explore, interact, and share their deepest fears amidst—of course—all-pink installations.

While he often reverts to a childlike state of being—childhood being a time when he thought he could do everything—Pink Sweat$ has had to learn about engaging with people who may genuinely be trying to help him, even if he doesn’t subscribe to their counsel.

“When I hop on stage it’s an instant reminder, ‘You can write a movie. You can write a short film. Why can’t you? Imagine all the other things you can do.’ The clock, it doesn’t stop. So why would you stop?”

“The challenge is hearing people out, being respectful, and them saying, ‘I hear what you’re saying, but that’s not what I want to do,’” he explains. “The new thing for me is listening, because you need to listen to others and hear them out. It’s like, ‘Yo, I know in my gut that people want to hear real music and people want to hear singers.’ The best way I could give it to them is to have as little going on as possible. I just knew. Like, ‘This is going to work.’ I was hoping it’d work. Then when it did, I was very shocked. I knew it would, but to see it with my own eyes going to the show and people singing [my songs] is incredible.”

The realization that he’s been successful making the music he wants to make gets Pink Sweat$ thinking with amazement about what other trailblazers must have been imagining upon reflection of their success.

“It’s like Steve Jobs building Apple,” he says. “How could you never be amazed? How could you ever wake up and not look around at what you built and say, ‘Damn, like this shit started in one of our bros’ garages?’ So for me it’s like when I hop on stage it’s an instant reminder, ‘You can write a movie. You can write a short film. Why can’t you? Imagine all the other things you can do.’ The clock, it doesn’t stop. So why would you stop?” 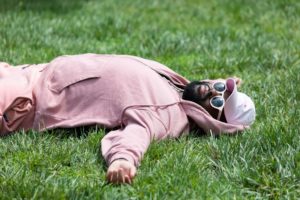 Pink Sweat$ shows no signs of slowing. The success of “Honesty”  led to the November 2018 release of his first EP, Volume 1. Volume 2 arrived in March of this year, buoyed by the popular single “Coke & Henny Pt. 2.” Although it contains percussion, much of Pink Sweat$’ music has remained consistent with the sonic vibe and emotional richness of “Honesty.” He writes and sings about the ups and downs of relationships—the ones people have with each other and the ones they have with themselves.

It’s been a winning formula for musicians for decades, a trend Pink Sweat$ is doing a great job continuing. But just as it was hard for people to fathom that a soulful singer belting out R&B tunes with only an acoustic guitar would make it big, Pink Sweat$ has found that his success and celebrity has, seemingly paradoxically, brought on some isolation.

“You know how they say, ‘It’s lonely at the top?” he asks. “People would like to say, ‘Oh, it’s because you didn’t take anybody with you.’ A lot of times it’s because, ‘How can I bring people with me who don’t have the same vision?’ Then it’s like a fear of being alone almost, too. It’s like, ‘If I take this journey, all my friends, they’re not on the exact same wave, so we can’t hang out as much.’ It’s so many things that are tiny little things that equals up into a mountain in the mind. It’s like, ‘Yo, it’s a big mountain out there. I don’t think I need to call anybody. I’m fine here. I make pretty decent money, everything’s taken care of. I’m somewhat happy. I don’t want to take those kinds of risks to see my full potential.’ Those are things I dealt with. I was afraid to say outwardly how I felt. I felt like I was dope. I felt like I was great at what I do. But I don’t have a six pack. I don’t have long hair down my back. I’m not light-skinned. There’s certain things where society tells you that you don’t fit this package. I’ve always felt confident, but it was a certain fear of letting people know how confident I was.”

Pink Sweat$ clearly has enough confidence to do things his way—and he’s often reminded that his instincts are usually correct. He also knows that practicing this mindset will keep him from living a nightmare he used to have.